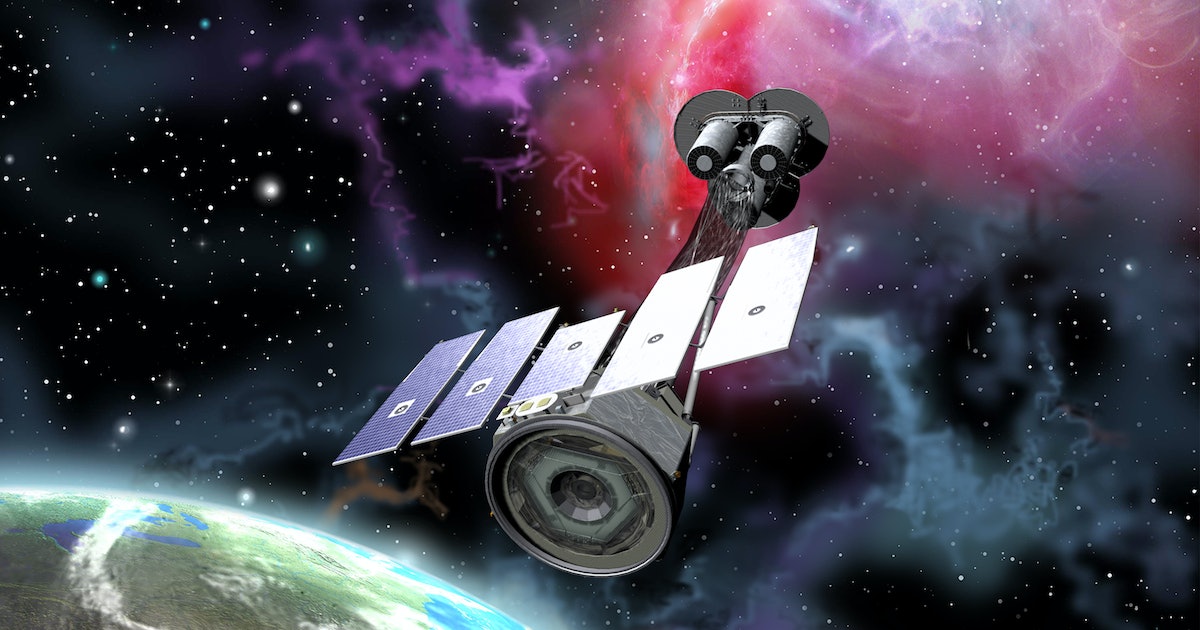 We think of black holes as dark voids — and technically, that’s true, but their effect on the space around them produces some of the brightest light in the universe. And physicists just got a step closer to understanding why.

The supermassive black hole called Markarian 501 lies at the heart of a galaxy 457 million light years away, and it blasts jets of charged particles into space at nearly the speed of light. In the process, those particles emit powerful X-rays, and because the jets happen to be pointed toward Earth, astronomers have an excellent view.

Recently, data from a fairly new space telescope helped a team of astrophysicists work out the mechanics that make those jets shine brighter than 100 billion Suns. A University of Turku-led team who observed the galaxy published their work in the journal Nature.

Supermassive black holes like Markarian 501 are voracious but messy eaters. As they feast on gas and dust, they also toss some of their food aside, hurling electrically-charged gas, called plasma, out into space at tremendous speeds. And when the fast-moving plasma plows into the slower clouds of gas outside the black hole’s accretion disk, the collision produces powerful shock waves.

“The particles basically become trapped in the shock, bouncing back and forth in the magnetic field of the shock,” Liodakis tells Inverse. “Every bounce gives them a little bit of more energy until they are energetic enough to escape the shock and start radiating.”

When electrons moving at nearly the speed of light find themselves pushed in a different direction by a magnetic field, they emit what’s called synchrotron radiation. That’s why the jets glow so brightly, according to Liodakis and his colleagues.

X-rays in the jets turned out to be very polarized, meaning all the light waves were oriented in the same direction. Picture a light bulb; it’s emitting waves of light, but the peaks and troughs of those waves are all oriented in random directions. Some of them might be waving up and down, while others might be oscillating left to right, or on a diagonal. That’s what light normally does. Now picture a computer screen. It’s also emitting waves of light, but the screen polarizes that light so that all the waves are oscillating in the same left-to-right direction.

Liodakis and his colleagues used data from NASA’s Imaging X-ray Polarimetry Explorer (IXPE) space telescope to measure how polarized the light of Markarian 501’s jets is. IXPE launched in early December, just a few weeks before the James Webb Space Telescope. Because magnetic fields play a role in polarizing light, measuring polarization is a good way to understand the structure of magnetic fields around objects like pulsars, neutron stars, and supermassive black holes.

If the synchrotron radiation was coming from random turbulence in the jets, physicists wouldn’t expect the X-rays to be polarized. But the light IXPE saw is actually very polarized. That suggests that the shock wave in the plasma created a magnetic field, which acts as a giant particle accelerator, speeding electrons in a new direction and causing them to spew X-rays in the process.

Here’s the background — Most supermassive black holes lie dormant at the centers of their galaxies; those still actively feasting on gas and dust are rare. And those that produce relativistic jets are rarer still; they’re called quasars.

Only a few of those jets are pointed toward Earth, which makes Markarian 501 part of a very small and very interesting group of supermassive black holes (to be fair, small in astronomical terms means that Markarian 501 is one of about 2,700 known blazars, the term for quasars that just happen to be aimed in our direction).

What’s Next — IXPE’s mission will last for at least another year, and Liodakis and his colleagues plan to use the space telescope to learn more about the mechanics behind Markarian 501’s brilliant relativistic jets. They’re keeping a close eye out for “outbursts,” moments when the already-bright jets flare even brighter than usual, indicating that the supermassive black hole is more active.

“Our observations were done when Markarian 501 was in sort of an average activity state. Those sources are always active, but there are periods of time that they go into these outbursts that can make them more than 100 times brighter,” Liodakis says. “We are not sure our findings apply in those states.”

The researchers also want to learn more about the particles being accelerated to nearly the speed of light to produce the jets. According to physicists’ current models of how the universe works, those particles should all be electrons — but we don’t know for sure.

“Generally speaking, we are also not sure what is the composition of the jets, i.e., what is the mix of particles that make up the jet, and how blazars make gamma-rays,” says Liodakis. “We hope with our new observations we will be able to solve those mysteries as well.”

We think of black holes as dark voids — and technically, that’s true, but their effect on the space around them produces some of the brightest light in the universe. And physicists just got a step closer to understanding why. The supermassive black hole called Markarian 501 lies at the heart of a galaxy 457…

We think of black holes as dark voids — and technically, that’s true, but their effect on the space around them produces some of the brightest light in the universe. And physicists just got a step closer to understanding why. The supermassive black hole called Markarian 501 lies at the heart of a galaxy 457…