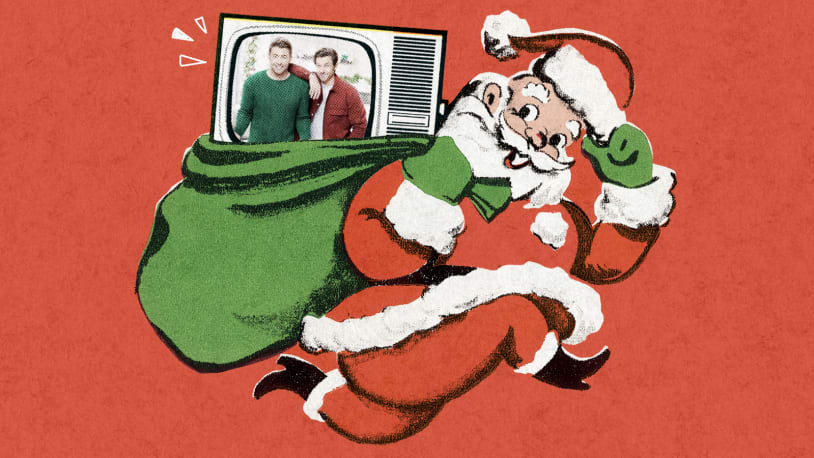 ‘Tis the season for Hallmark movies cheesier than anything you could cook for Christmas dinner. Well, actually, ’tis been the season for a few weeks, as the channel’s famed barrage of holiday movies started even before Halloween. But there are tons left on the schedule, including a few that will make history for the network — and others with some truly wild premises:

Will we watch a new Hallmark movie starring Eve Plumb? Sure, Jan. That’s right, Plumb, who played Jan Brady on The Brady Bunch, stars in A Holiday Spectacular, and unlike most of these other Hallmark films, this one is actually a period piece. Set in 1958, it revolves around an heiress “who puts her high-society wedding plans on hold in order to sneak up to New York City and make her secret dream come true: dancing live on stage in the Christmas Spectacular at Radio City Music Hall.” Ginna Claire Mason, Derek Klena, and famed singer-actress Ann-Margret star, as do the actual Radio City Rockettes — so watching this will be just slightly more convenient and less expensive than going to see them live. Tune in to find out which character from the 1950s will end up frozen in ice before being recruited for the Avengers.

Clare Bowen from Nashville and Brant Daugherty from Pretty Little Liars star in #XMas, which is actually the title of a specific movie and not just what you’re supposed to tweet while watching Hallmark in general. Bowen plays Jen, who “gets the chance to enter a brand’s design contest,” so she “poses as a family influencer, enlisting the help of her best friend, Max, and her baby nephew.” But “when her video is selected as a finalist, Jen is torn on whether to go on with her perfect ‘family’ or reveal the truth,” the plot synopsis says. That’s right, it’s the Dear Evan Hansen of Hallmark Christmas movies, except that the main character actually looks their proper age.

You’ve heard people poetically describe their significant other as having brought color into their lives, but Hallmark has decided to take that phrase really literally this year. The Most Colorful Time of the Year stars Christopher Russell and Katrina Bowden, the latter of whom played Liz Lemon’s assistant Cerie on 30 Rock, which is only appropriate given the premise for this one absolutely sounds like a fake movie within the 30 Rock world: “Ryan is an elementary school teacher, who learns that he is colorblind. Michelle, an optometrist and mother of one of his students, helps bring color into his life in time for the holidays” … both literally and figuratively, one presumes. Sing it with us: I don’t want a lot for Christmas, there is just one thing I need: An eye exam!

I don’t think my father, the inventor of Christmas, would be too pleased to hear about this. Mean Girls‘ Gretchen Wieners herself, Lacey Chabert, stars in Haul out the Holly as Emily, who goes home to visit her parents, only to find that “their HOA insists that she participate in its many Christmas festivities.” That’s right, Lindsay Lohan isn’t the only Mean Girls alum with a Christmas movie out this year — though this is hardly a comeback for Chabert, who has starred in over 30 Hallmark films at this point and is really making a play for Mariah Carey’s “Queen of Christmas” title. The rest of the cast includes Ellen Travolta — sister of John Travolta — and character actor Stephen Tobolowsky. He’s perhaps best known for playing Ned Ryerson in Groundhog Day, and his character here happens to also be named Ned. The Groundhog Day Expanded Universe is happening, baby!

Have a groovy, groovy Christmas! None other than Evil Dead‘s Bruce Campbell is starring in another Hallmark Christmas film after appearing in last year’s One December Night — though just to make writing about the movie as confusing as possible, the protagonist of My Southern Family Christmas isn’t Campbell’s character but is named … Campbell. “Under the guise of a journalist, Campbell has a chance to get to know her biological father for the first time — without him ever knowing who she really is,” the plot synopsis says. “As she spends time with him and his family, as well as with the town’s record keeper, she realizes that families are messy, wonderful things.” Jaicy Elliot, Ryan Rottman, and Moira Kelly also star. We’re going to assume no Deadites will show up, but hey, you never know. This one is airing on Thanksgiving night for those who don’t mind cheating on one holiday with another.

Hallmark has been adding more Hanukkah-themed movies to its calendar in recent years — usually one or two compared to about 50,000 Christmas films — though the network has faced some criticism over the way it has depicted the holiday. “Hallmark’s Hanukkah movies are really Christmas movies about how Hanukkah is weird,” The Washington Post said in 2019. So we’ll see how they do this year with Hanukkah on Rye, another film on the schedule with a “sounds like it’s lifted from 30 Rock” premise: “A matchmaker connects Molly and Jacob, but their new romance is put to the test when they realize that they are competing deli owners.” Jane the Virgin‘s Yael Grobglas and Supergirl‘s Jeremy Jordan star, and singer-songwriter Lisa Loeb is randomly in here, too. Get ready for a real meat cute — and if you think we’re getting out of this movie without someone saying “you’re full of baloney,” you have another thing coming.

Similarly, you’d think with about eight million holiday movies per year, Hallmark might have slipped one about Kwanzaa in there, but this year’s Holiday Heritage will actually be the network’s first movie ever centered around that holiday. (In 2019, the CEO of Hallmark’s parent company claimed this was because they didn’t want to “make movies based off of specific holidays” because “we don’t look at Christmas from a religious point of view, it’s more a seasonal celebration.”) The premise: “Ella returns to her hometown to mend fences with her fractured family. With the help of Griffin, her ex-boyfriend, she encourages her family to celebrate Christmas and Kwanzaa and to heal their past wounds before it’s too late.” Lyndie Greenwood (Sleepy Hollow), Brooks Darnell (A Christmas Miracle), and Holly Robinson Peete (21 Jump Street) star.

No disrespect to The Crown, but this is the month’s real most anticipated royal content. In A Royal Corgi Christmas, “Reluctant Crown Prince Edmond returns home just before Christmas in anticipation of being named successor to the throne,” and “to ingratiate himself to his mother the Queen,” he gifts her a “rambunctious Corgi.” But after “several doggy disasters,” he turns to “canine behavior expert” Cecily, and “sparks fly between them as the pair work together to get Mistletoe ready to present at the annual Christmas Ball.” The movie will feature a whole bunch of Corgis at a “Corgi Christmas Derby,” so are we sure we don’t want to cut out the entire human plot and just air two hours of that? Queen Elizabeth II has already set this one to tape on her DVR in heaven.

The Holiday Sitter is set to make history for Hallmark, as it will be the network’s first-ever Christmas movie centered around a gay couple. “When Sam, a workaholic bachelor, babysits his niece and nephew before the holidays, he recruits help from their handsome neighbor Jason and finds himself in an unexpected romance,” the plot synopsis says. Mean Girls‘ Jonathan Bennett stars alongside George Krissa.

The film’s debut will come in the wake of Full House star Candace Cameron Bure drawing criticism for telling The Wall Street Journal that Hallmark competitor Great American Family won’t feature LGBTQ-led Christmas movies because the channel “will keep traditional marriage at the core.” As for Hallmark, Bennett praised the network’s “leadership and executives,” who “not only believed in this story but took such good care of it and championed it wholeheartedly the entire process.”

The rest of the schedule

Obviously, 10 Christmas movies within the span of about a month isn’t nearly enough, so here’s a look at Hallmark’s remaining 2022 schedule:

And for the few people who haven’t been religiously tuning into Hallmark every night since October, here’s a bonus pick of a film that already aired but is scheduled to be rebroadcast:

It looks like two of the Full House sisters are engaged in a bit of a made-for-TV Christmas movie cold war. Candace Cameron Bure used to star in Hallmark movies, but she left the network earlier this year for Great American Family — where she has vowed there will be no LGBT-led movies, as previously mentioned.

So Hallmark simply swapped in one Full House alum for another, as A Cozy Christmas Inn stars Stephanie Tanner actress Jodie Sweetin (who has been supportive of the LGBTQ+ community; when JoJo Siwa slammed Bure for “excluding LGBTQIA+,” Sweetin replied, “You know I love you.”). Sweetin plays a real estate executive who “travels to Alaska during the holidays to acquire a B&B, only to discover it’s owned by her ex.” But get this: A Cozy Christmas Inn is actually a sequel to 2014’s Christmas Under Wraps, which starred Candace Cameron Bure. Drama!

‘Tis the season for Hallmark movies cheesier than anything you could cook for Christmas dinner. Well, actually, ’tis been the season for a few weeks, as the channel’s famed barrage of holiday movies started even before Halloween. But there are tons left on the schedule, including a few that will make history for the network…

‘Tis the season for Hallmark movies cheesier than anything you could cook for Christmas dinner. Well, actually, ’tis been the season for a few weeks, as the channel’s famed barrage of holiday movies started even before Halloween. But there are tons left on the schedule, including a few that will make history for the network…

What’s going on at Disney?