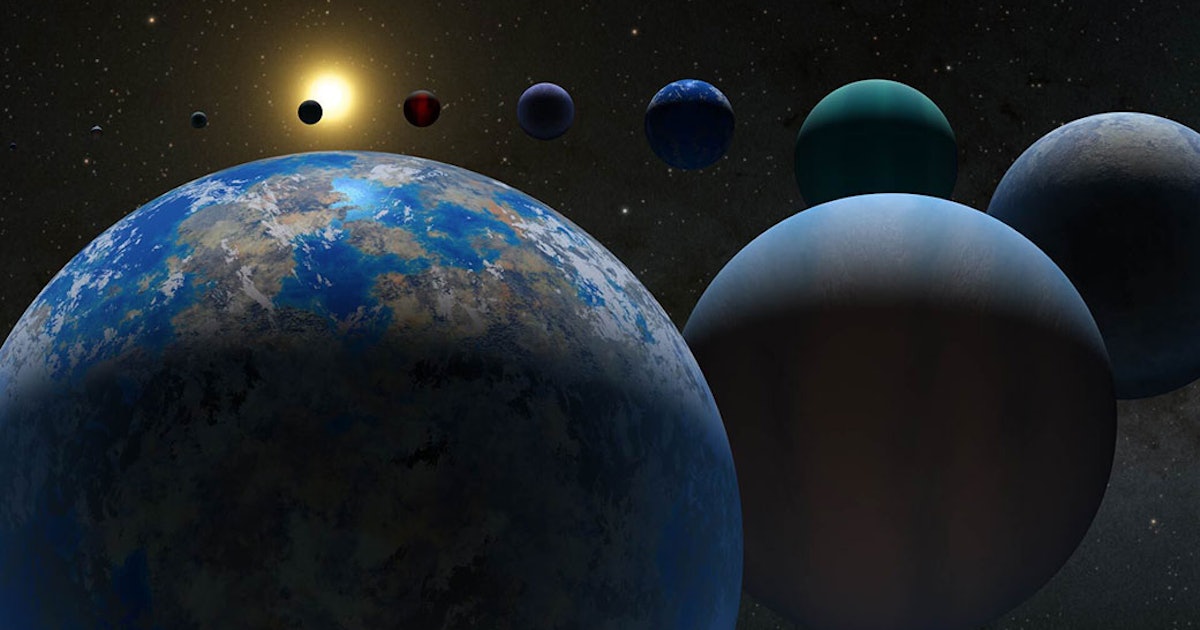 Scientists are close to solving an exoplanet mystery

Today, the number of confirmed exoplanets stands at 5,197 in 3,888 planetary systems, with another 8,992 candidates awaiting confirmation. The majority have been particularly massive planets, ranging from Jupiter and Neptune-sized gas giants, which have radii about 2.5 times that of Earth. Another statistically significant population has been rocky planets that measure about 1.4 Earth radii (“Super-Earths”). This presents a mystery to astronomers, especially where the exoplanets discovered by the venerable Kepler Space Telescope are concerned.

Of the more than 2,600 planets Kepler discovered, there’s an apparent rarity of exoplanets with a radius of about 1.8 times that of Earth — which they refer to as the “radius valley.” A second mystery, known as “peas in a pod,” refers to neighboring planets of similar size found in hundreds of planetary systems with harmonious orbits. In a study led by the Cycles of Life-Essential Volatile Elements in Rocky Planets (CLEVER) project at Rice University, an international team of astrophysicists provide a new model that accounts for the interplay of forces acting on newborn planets that could explain these two mysteries.

The research was led by André Izidoro, a Welch Postdoctoral Fellow at Rice’s NASA-funded CLEVER Planets project. He was joined by fellow-CLEVER Planets investigators Rajdeep Dasgupta and Andrea Isella, Hilke Schlichting of the University of California, Los Angeles (UCLA), and Christian Zimmermann and Bertram Bitsch of the Max Planck Institute for Astronomy (MPIA). As they describe in their research paper, which recently appeared in the Astrophysical Journal Letters, the team used a supercomputer to run a planetary migration model that simulated the first 50 million years of planetary system development.

In their model, protoplanetary disks of gas and dust also interact with migrating planets, pulling them closer to their parent stars and locking them in resonant orbital chains. Within a few million years, the protoplanetary disk disappears, breaking the chains and causing orbital instabilities that cause two or more planets to collide. While planetary migration models have been used to study planetary systems that retained orbital resonances, these findings represent a first for astronomers. As Izidoro said in a Rice University statement:

“I believe we are the first to explain the radius valley using a model of planet formation and dynamical evolution that self-consistently accounts for multiple constraints of observations. We’re also able to show that a planet-formation model incorporating giant impacts is consistent with the peas-in-a-pod feature of exoplanets.”

This work builds on previous work by Izidoro and the CLEVER Planets project. Last year, they used a migration model to calculate the maximum disruption to TRAPPIST-1’s seven-planet system. In a paper that appeared on November 21, 2021, in Nature Astronomy, they used N-body simulation to show how this “peas in a pod” system could have retained its harmonious orbital structure despite collisions caused by planetary migration. This allowed them to place constraints on the upper limit of collisions and the mass of the objects involved.

Their results indicate that collisions in the TRAPPIST-1 system were comparable to the impact that created the Earth-Moon system. Said Izidoro:

“The migration of young planets towards their host stars creates overcrowding and frequently results in cataclysmic collisions that strip planets of their hydrogen-rich atmospheres. That means giant impacts, like the one that formed our moon, are probably a generic outcome of planet formation.”

This latest research suggests that planets come in two variants, consisting of dry and rocky planets that are 50 percent larger than Earth (super-Earths) and planets that are rich in water ice about 2.5 times the size of Earth (mini-Neptunes). In addition, they suggest that a fraction of planets twice the size of Earth will retain their primordial hydrogen-rich atmosphere and be rich in water. According to Izidoro, these results are consistent with new observations that suggest that super-Earths and mini-Neptunes are not exclusively dry and rocky planets.

These findings present opportunities for exoplanet researchers, who will rely on the James Webb Space Telescope to conduct detailed observations of exoplanet systems. Using its advanced suite of optics, infrared imaging, coronographs, and spectrometers, Webb and other next-generation telescopes will characterize the atmospheres and surfaces of exoplanets like never before.

Today, the number of confirmed exoplanets stands at 5,197 in 3,888 planetary systems, with another 8,992 candidates awaiting confirmation. The majority have been particularly massive planets, ranging from Jupiter and Neptune-sized gas giants, which have radii about 2.5 times that of Earth. Another statistically significant population has been rocky planets that measure about 1.4 Earth…

Today, the number of confirmed exoplanets stands at 5,197 in 3,888 planetary systems, with another 8,992 candidates awaiting confirmation. The majority have been particularly massive planets, ranging from Jupiter and Neptune-sized gas giants, which have radii about 2.5 times that of Earth. Another statistically significant population has been rocky planets that measure about 1.4 Earth…