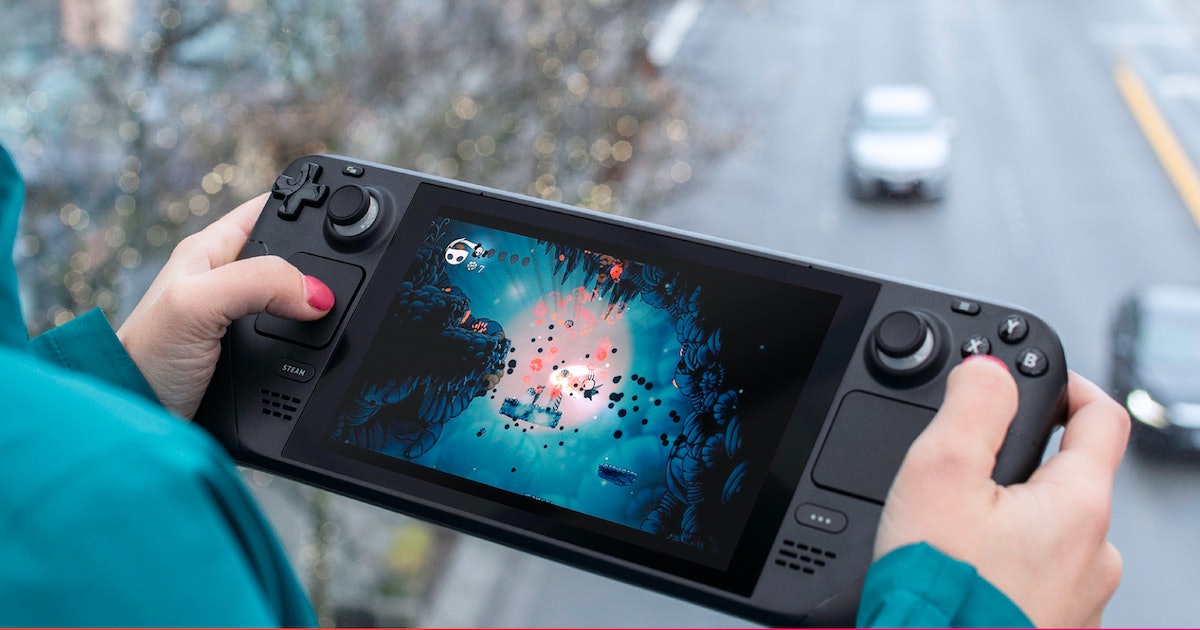 As intimidating as it might seem, Valve’s Steam Deck has gotten closer to turning PC gaming into a handheld experience than anyone expected it would.

The Steam Deck is technically a Linux computer, but thanks to a powerful custom AMD chip, a unique control scheme, and a software conversion layer called Proton, it can play a large number of Windows games on Steam. Whether it’s an indie gem or the next big AAA title, the Steam Deck can probably run it — and the list of compatible games only continues to grow.

If you’ve only dabbled in PC gaming, or are just curious what desktop experiences might look like on the go, the Steam Deck is a great buy and an even better gift. But what if you’re not sure where to start? Which Steam Deck storage model should you buy and which accessories should you scoop up first? Don’t panic! We got you covered in this guide.

Which Steam Deck should I buy?

Valve sells three models of the Steam Deck, and critically, their most important features are the same. You won’t have to worry about missing out on exclusive features, alternative form factors, or different processing power. This isn’t a Nintendo Switch, Switch OLED, or Switch Lite situation; from $399 to $649, every Steam Deck can play the same games in the same ways.

Where the Steam Decks differ is in storage size and speeds (and technically, an anti-glare matte screen for the most expensive model). The entry-level $399 Steam Deck only ships with 64GB of eMMC storage — a paltry amount when big, graphics-intensive games like Red Dead Redemption 2 can easily hit 150GB downloads — in a format that’s technically slower than the other options Valve sells. The $529 Steam Deck ships with 256GB of NVMe SSD storage, which will load files faster than eMMC, and the $649 Steam Deck comes with 512GB of NVMe SSD storage, which Valve calls its “fastest storage.”

The good thing is, even if the price for more and faster storage seems too high, every Steam Deck has a high-speed microSD card slot. If you’re willing to spend a bit more for a 1TB microSD card, or you already have one of your own, you can get by with less built-in storage (or maybe even get a deal on a microSD card).

I’d say the entry-level $399 model, or if you’re really worried about the hassle of storage, the middle $529 model are the best options. For anything more, your money is better spent on games and other accessories.

Which Steam Deck accessories should I buy?

The Steam Deck ships with a relatively cushioned hard shell case and a fast charger, but now that it’s been out for a while, there are some alternatives worth considering. Especially if you already saved money on the Steam Deck itself. From protective cases to fun customization options, here are the accessories Inverse recommends.

The Gxegauy Protective Case is rubberized and grippy. It covers up the more sensitive parts of the Steam Deck while leaving the handheld PC’s ports and ventilation open. It might not protect your Steam Deck from major drops, but it’s a good cover for daily bumps and scratches.

If you’re looking for an option that will add some Switch-like functionality to your Steam Deck, consider the Jsaux Kickstand Protective Case. This case offers protection for the backs and sides of the Steam Deck. It also includes a kickstand so you can prop your handheld up if you’re using a Bluetooth controller or you just want to give your hands a break.

Finally, for a carrying case that will also keep your Steam Deck safe while you travel, the MVRPDXC Carrying Case is a great option. The MVRPDXC is basically a sling backpack with a scratch and splash-proof exterior, and multiple pockets on the inside to hold battery packs and chargers.

Prices for extra storage tend to go down over time, but you can already get a microSD with a respectable number of gigs without paying much. The 128GB Samsung Pro Plus microSD card is frequently on sale and offers 160MB per second transfers — plenty fast enough for loading games on the Steam Deck.

If you’re looking for an even faster option, the 128GB SanDisk Extreme Pro microSDXC card can do transfer speeds of 170MB per second; its shockproof, waterproof, and temperature-proof. That tends to come with a higher cost (again you can almost always find one of these cards on sale), but it might be worth it if you want the best possible option for your Steam Deck.

And if you really want a ton of storage, SanDisk also has 1TB cards for less than the price of upgrading from a 64GB Steam Deck to a 512GB one.

The Steam Deck is a proper PC, just as ready to be played in handheld mode as it is connected to an external display or your TV. Enter dedicated USB-C docks, which can help you power and connect your deck when you want to use it with a bigger screen.

Valve’s first-party Steam Deck Docking Station is utilitarian and made of plastic, but has a good amount of ports. Along with a USB-C cable to connect to and charge your Steam Deck, there’s a DisplayPort 1.4 port, an HDMI 2.0 port, a USB-C in for connecting the dock to external power, a Gigabit Ethernet port, and three USB-A 3.1 ports.

If you’re looking for a similar, more affordable third-party option, the Jsaux Docking Station has the same USB-C connector, a USB-C in for charging, an HDMI 2.0 port, a Gigabit Ethernet port along the side, and three USB-A 3.0 ports. It’s also metal and much more solid than Valve’s official option.

Battery life on the Steam Deck can vary depending on your current settings and the game you’re playing. Valve’s charger is perfectly fine, but if you’re looking for a way to charge your Steam Deck and give it some extra power when you’re away from an outlet, look no further than the Anker 733 Power Bank.

The Anker 733 Power Bank is a 65W wall charger and 10,000mAh battery pack in one device, with two USB-C ports and one USB-A port. It’s basically everything you need for charging in a relatively small package.

For a more affordable option, the Amazon Basics Ultra-Portable Fast Charging Power Bank has a 20,100 mAh capacity, two USB-A ports, and a USB-C port for topping up your Steam Deck.

The Steam Deck might have customizable software and controls, but it’s always going to look like black plastic. For anyone who wants to customize how their Steam Deck actually looks, your best bet might be an adhesive skin.

Dbrand is one of the more popular options for skins, and it has a pretty wide variety of customizable selections for the Steam Deck. The most eye-catching has to be its Teardown skin, which basically covers the outside of your Steam Deck with what the electronics on the inside would look like if they were exposed.

If you’re willing to get even more adventurous, there are even wilder options available from independent sellers on Etsy. Storefronts like ZoomHitSkins and SakuraSkins offer Steam Deck skins with everything from manga to any image you want printed on your Steam Deck. Costs might not be as consistent as you’d find at a larger company, but you’ll be able to support a small business and get an even more unique Steam Deck in the process.

As intimidating as it might seem, Valve’s Steam Deck has gotten closer to turning PC gaming into a handheld experience than anyone expected it would. The Steam Deck is technically a Linux computer, but thanks to a powerful custom AMD chip, a unique control scheme, and a software conversion layer called Proton, it can play…

As intimidating as it might seem, Valve’s Steam Deck has gotten closer to turning PC gaming into a handheld experience than anyone expected it would. The Steam Deck is technically a Linux computer, but thanks to a powerful custom AMD chip, a unique control scheme, and a software conversion layer called Proton, it can play…

How long is ‘Pokémon Scarlet and Violet’? How many gyms, total hours, and playtime