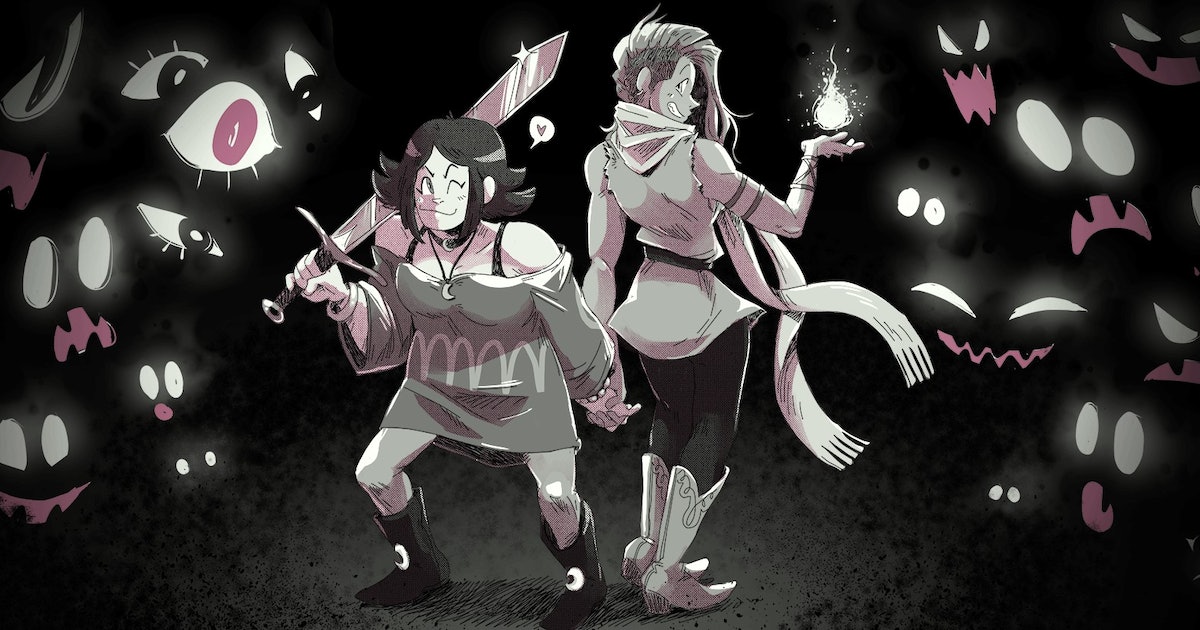 You need to play the spiciest mobile game of 2022

Carving out time to spend with your partner can be hard when you have to balance things like paying rent, dealing with annoying officials, and fighting back hordes of demons. But no one said dating was easy. So it goes for the girls of BOSSGAME: The Final Boss is My Heart, a delightful mobile game that mixes deep boss rush combat with the small moments found in an ever-evolving relationship. This thoroughly engrossing and emotionally resonant experience leaps over the idea that a mobile game can’t be good.

Sophie and Anna are two broke girlfriends trying to make ends meet in the big city by taking one job after another. Their unique skill sets as a sword-wielding priestess and a magic-wielding witch make them uniquely suited for the role of devil hunters.

Business is booming due to an influx of devils in Mammon City, meaning Sophie and Anna spend much of their time in the sewers and back alleys trudging along to root out the latest infestation. Combat itself falls into the classic mobile style of a boss rush. Enemy after enemy will sit in the way of the two devil hunters and only by hacking and slashing will you make your way through.

Mechanically the screen is split into two sides. Either side corresponds to either Sophie or Anna and their attacks, skills, and defense. But rather than spamming buttons to move through combat as quickly as possible BOSSGAME requires the player to think more strategically. It’s a cliche, but the game takes inspiration from Dark Souls in how it rewards or punishes the player for how much they pay attention to enemy attack patterns.

Each action you take depletes a limited stamina bar, so you have to be sure your attack is hitting or that you have enough stamina to defend from a hard-hitting boss attack that could otherwise wipe you out. If one of our daring duo does pass out you can press on their icon to send a bunch of hearts from the still-conscious girl over till the other is revived, which I can only interpret as giving your girlfriend a bunch of little smooches until she feels better (which works for girlfriends in real life too FYI).

The need to coordinate and use combos plays up the idea of Sophie and Anna as building a relationship and communicating effectively, something that the moments in between combat fully delve into.

When not battling devils Sophie, Anna, and a plethora of side characters (including enemies) cannot stop talking to each other. This is represented on the screen by little text bubbles that are effectively text messages with an 8-bit coat of paint.

Sophie and Anna go through all of this because at the end of the day they just want to be able to go home and be together. So, they spend their free time and time on their way to missions just talking, and wow these girls are thirsty! Not a minute passes without one of them suggesting the two make joint use of the shower or offer to engage in PDA at completely inappropriate times.

But there are deeper moments when the constant sunny facades fade away to talk about deeper issues. Sophie still has trouble accepting love because she can’t reconcile her own self-hatred. As a trans woman, Sophie finds that she had a hard time making friends with other priestesses and is somewhat of a black sheep, so self-doubt becomes a wall she puts up between her and Anna.

Anna isn’t perfect either, she’s brash and acts without thinking. The first moments of the game see Anna running off ahead and getting herself taken out, leaving Sophie to worry and revive her. Anna brushes these things off and doesn’t always pay attention to how it impacts Sophie.

These moments between Anna and Sophie of both shared joy and sadness are achingly human. It is some of the most relatable story-telling in any game I have personally played. But then again, this game is made for someone exactly like me. I’m a trans woman in my mid-20s whose biggest day-to-day issue is making sure I can pay rent every month with my girlfriend. Sophie feels like me; I know what she is going through and I see the best and worst of myself in her.

BOSSGAME: The Final Boss is My Heart is now available on iOS and Android devices. A Steam version is scheduled to release in Spring 2023.

Carving out time to spend with your partner can be hard when you have to balance things like paying rent, dealing with annoying officials, and fighting back hordes of demons. But no one said dating was easy. So it goes for the girls of BOSSGAME: The Final Boss is My Heart, a delightful mobile game…

Carving out time to spend with your partner can be hard when you have to balance things like paying rent, dealing with annoying officials, and fighting back hordes of demons. But no one said dating was easy. So it goes for the girls of BOSSGAME: The Final Boss is My Heart, a delightful mobile game…

What is Damage Mitigated and why does it matter?