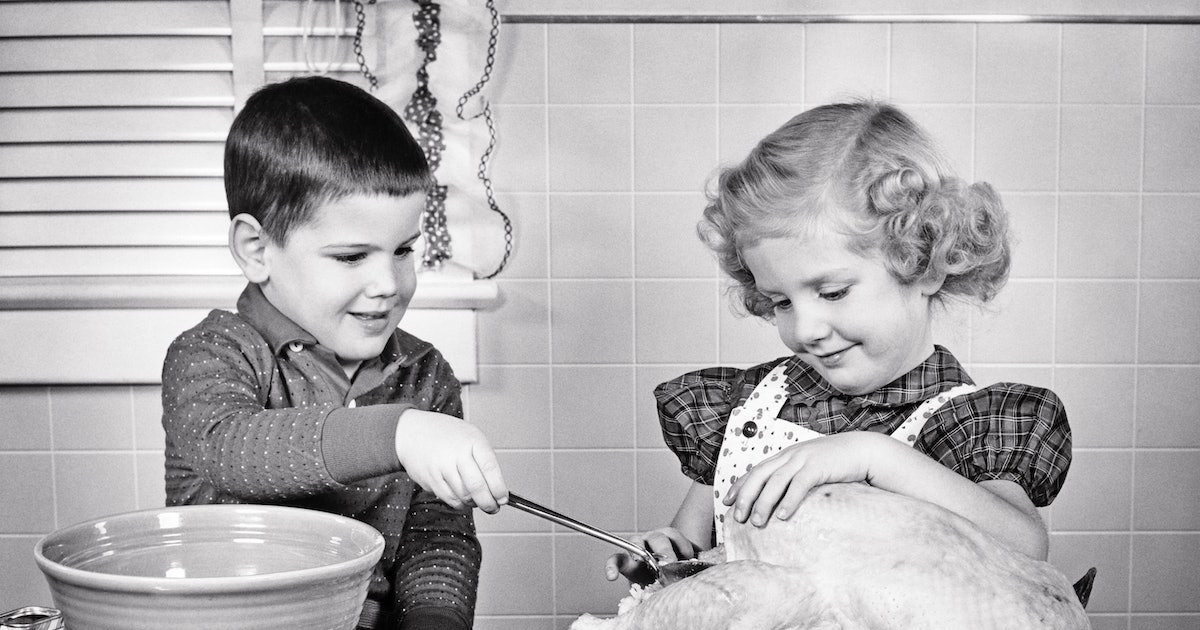 Can you stuff a turkey? Science reveals how to prep this ancient holiday meal

Move aside, turkeys. Today, we’re talking about stuffing. What could be more wonderful than a big ol’ bowl of bread seasoned with herbs and lovingly coated with fat? It sounds too good to be true, but it is true, and I’m eating it. Every year, you can count on one thing: I will be sitting next to the stuffing.

Stuffing is a rich food, speaking both calorically and historically. Early stuffing recipes — the preparation is mentioned as far back as Roman times — were based on vegetables, herbs, and nuts. Today, American Thanksgiving stuffing recipes are delightfully regional. In the South, stuffing is referred to as dressing, and recipes often use cornbread as the base. Classic New England stuffing is spiked with oysters, and in the Midwest, it’s all about sausage and sage. These local twists are a reflection of the diversity of American cuisine, but when it’s time to cook the stuffing, things can get a little controversial.

Stuffing, by its very nature, implies food intended to be encased in something else. You can fill just about any protein with stuffing — whole chickens and whole fish can be stuffed inside their cavities, while boneless cuts like a chicken breast or a pork loin can be butterflied, filled, and rolled back up.

Should you stuff a turkey?

Regarding turkeys, cooking your stuffing inside the bird’s cavity can yield a moist side dish that has absorbed lots of flavorful meat juices. Yet it can also be difficult to bring the center of a stuffed turkey to food-safe temperatures without overcooking the meat itself. The safest method, and the one recommended by the U.S. Food & Drug Administration, is to cook the stuffing separately from the turkey in a baking dish.

But if you’re cooking a turkey, chances are it is Thanksgiving, and some people aren’t willing to compromise on that meal. To find out if there’s a way to have it all — a juicy bird, rich stuffing, and food safety — I called up scientist and author of 150 Food Science Questions, Answered, Bryan Quoc Le.

“The issue with stuffing,” Le tells me, “is that if you put it into the turkey cold, and then you put that whole thing into the oven, the heat doesn’t penetrate fast enough.”

This presents a food safety issue. The stuffing inside the bird is absorbing juice from the turkey, but Le explains that “there is a risk that the stuffing inside has been sitting in the danger zone, between 40 degrees Fahrenheit and 135 degrees Fahrenheit, it could sit there for a while, and at that temperature producing it’s producing microorganisms. You might be able to kill some of [the bacteria], but if there’s anything leftover producing toxins, that’s going to be a problem.”

Undercooked poultry and poultry-contaminated foods present a risk for E. coli and salmonella. These are some nasty bacteria with the potential to make a person very sick. Certain strains of E. coli, in particular, are tolerant of extremely acidic environments, like those found inside the human stomach. What’s worse, Le elaborates, is that it doesn’t take many surviving bacteria to cause illness.

Unfortunately, from the cook’s perspective, it’s not as simple as just cooking everything for long enough until the center of the stuffing reaches the recommended temperature. When a turkey is in the oven, the heat comes from the outside. By the time the inside of the breast meat has reached 165 degrees Fahrenheit, the surface of the bird is closer to the oven temperature. This extreme heat can cause the surface of the meat to dry out and get tough.

Why is stuffing a turkey so hard?

The size of the turkey is what makes temperature regulation difficult. Getting the inside of the turkey to the correct temperature before the surface dries out is a delicate balancing act, and introducing stuffing complicates this further. Consider the bird a thermal mass — a scientific term that essentially means the stuff we’re trying to heat up. Stuffing the bird with anything — cornbread, oysters, dog food — will increase the thermal mass and slow the cooking time. For food-safe temperatures and a juicy bird, you need to monitor everything closely.

“The longer you hold something above the temperature at which bacteria live, which is about 130-135 degrees Fahrenheit, the more likely you are to reduce the numbers of bacteria,” he says.

A temperature of 165 degrees Fahrenheit will kill illness-causing bacteria in about a minute, but lower temperatures can also be effective if you hold the temperature for longer. This method is called long-time low-temperature pasteurization, and it’s commonly used in the dairy industry.

According to Le, “If you hold something at 145 degrees Fahrenheit for 30-45 minutes, that’s equivalent to holding something at 165 degrees Fahrenheit for one minute.” The key element is monitoring. To cook stuffing inside a turkey, you should monitor the stuffing temperature and the meat. Use an internal thermometer inserted into the deepest part of the breast to take the temperature of the meat, clean the thermometer, and then take the internal temperature of the stuffing.

To reach food-safe temperatures, Le stresses the importance of starting with stuffing that has been slightly warmed. If the stuffing comes right from the fridge, it will take longer to heat and could end up sitting in the danger zone for longer.

What about the skin?

If you’re using the long-time low-temperature pasteurization method, reducing the oven temperature is one method for thoroughly cooking the center of the meat without drying out the exterior. This allows you to bring up the temperature of the entire bird more gradually. The lower oven will prevent the exterior from becoming overcooked, and everything will stay nice and juicy. With this method, however, a new complication arises.

High temperatures are required to create crispy skin, the best part of roasted turkey. Crispy skin is caused by the Maillard reaction, which is a chemical process that creates browning and caramelization.

If the turkey and stuffing reach the correct temperature, but the skin looks too light, you can compensate by turning on the broiler for a few minutes to blast the exterior with high heat and crisp up the skin. You also can put in some work to accelerate the Maillard reaction before the turkey even reaches the oven by brining or putting a little sugar on the exterior of the bird.

Brining is Le’s preferred preparation method when roasting whole chickens or turkeys. In addition to adding flavor, this is a useful technique that accelerates the Maillard reaction on the surface of the turkey skin.

There are two ways to brine a turkey. For a dry brine, start by covering the entire surface of the meat in a mixture of salt and spices of your choosing. Cover the meat loosely with plastic wrap or a large plastic bag, place it on a sheet pan, and store it in your refrigerator. For a wet brine, submerge the entire bird in a solution of salt, water, and spices. Ground spices won’t work well in this application, but whole aromatics like black peppercorns and bay leaves will add flavor. Make sure the bird stays submerged, and store the entire bucket in your refrigerator on a sheet pan to prevent drips.

This process is simple, but it takes several days for the salt to have its desired effect. During brining, salt penetrates the meat of the bird. Don’t forget to prepare this step in advance. For a dry brine, the salt will initially suck the water out of the meat through osmosis. In the next phase, the turkey draws this moisture back in. If your brining time is too short, it could result in dried-out meat. Ample brining time allows the salt to flavor the inside of the meat and locks in juices during cooking. This method creates a satisfying flavor and texture, but it also reduces the “water activity” on the surface of the meat. The FDA defines water activity as “​​the ratio between the vapor pressure of the food itself, when in a completely undisturbed balance with the surrounding air media, and the vapor pressure of distilled water under identical conditions.”

Taste test — The Thanksgiving turkey is the table’s centerpiece, but it’s not necessarily everyone’s favorite element. If stuffing is the thing that makes your heart sing, it’s worth it to do the extra work to consider all of these elements. With an understanding of the science and extremely careful monitoring, and the right environment, you can enjoy safe, moist stuffing that has been flavored with all of the turkey juices you desire. It just takes a little knowledge, prep, and an internal thermometer to enjoy your meal and settle to watch the annual dog show.

Of course, for absolute peace of mind and safety, FDA recommendations remain the most cautious and error-proof way to prepare the stuffing. To avoid any risk and to get a moist bird and beautifully cooked stuffing, the best practice is still to prepare and cook stuffing in a baking dish to an internal temperature of 165 degrees Fahrenheit and to cook the turkey separately. Happy basting!

Taste of the Holidays is an Inverse series about the science of food. Get the inside scoop on your favorite (or hated) nostalgic holiday dishes via our hub, which will update with new stories through December 2022.

Move aside, turkeys. Today, we’re talking about stuffing. What could be more wonderful than a big ol’ bowl of bread seasoned with herbs and lovingly coated with fat? It sounds too good to be true, but it is true, and I’m eating it. Every year, you can count on one thing: I will be sitting…

Move aside, turkeys. Today, we’re talking about stuffing. What could be more wonderful than a big ol’ bowl of bread seasoned with herbs and lovingly coated with fat? It sounds too good to be true, but it is true, and I’m eating it. Every year, you can count on one thing: I will be sitting…