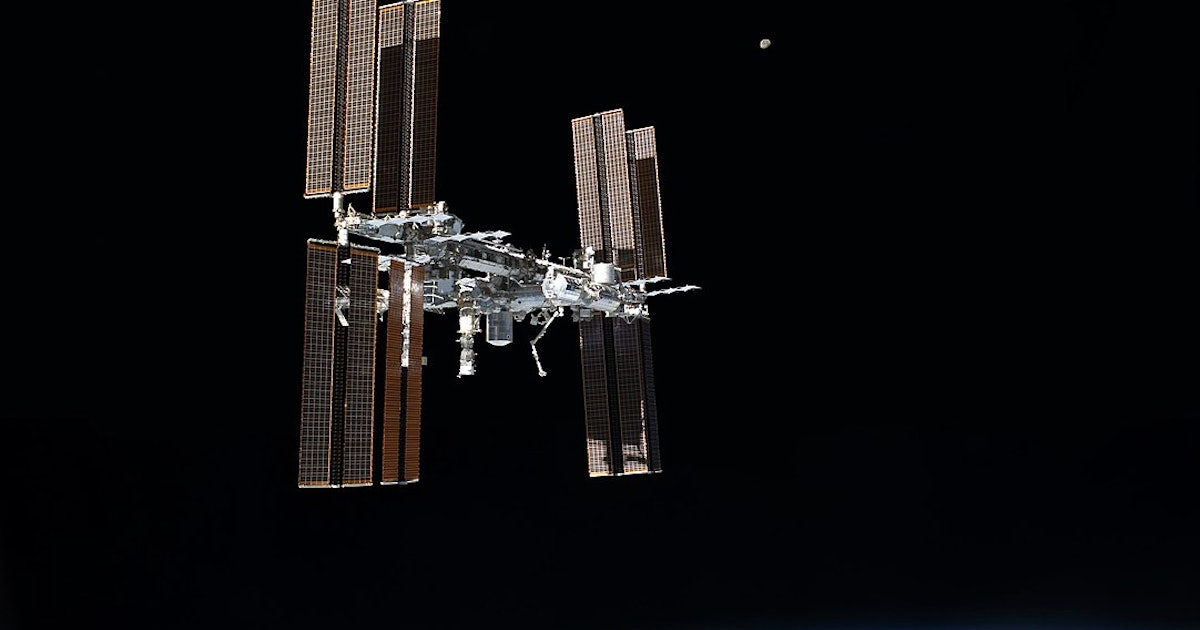 About once a year, the International Space Station takes evasive action to avoid colliding with a chunk of space junk.

The most recent maneuver happened last week when the ISS boosted itself into a higher orbit to avoid debris from a 2021 Russian anti-satellite missile test. It’s likely that such close calls will only get more common as humanity keeps cluttering up the space lanes with old satellites and bits of wreckage from collisions and missile tests. Here’s what you need to know about space debris and how to avoid it.

How does the International Space Station dodge space debris?

It’s tempting to picture astronauts piloting the ISS like it’s the Millennium Falcon, relying on their lightning reflexes (and maybe the Force) to swerve around bits of obliterated spaceships, often with mere inches to spare. The reality — like a lot of things in space flight — is much slower and happens over much bigger distances than Hollywood’s version. But it can still be extremely tense, as lives are at stake, and if something goes wrong, help is not on the way.

Nobody sits in a cockpit on the ISS with a joystick, turning the whole station left or right out of the path of an oncoming chunk of debris. That’s not how space maneuvers work. Instead, if you’re barreling toward another object in space, you either speed up, which boosts you into a higher orbit, or you slow down, which puts you in a lower orbit. To dodge last week’s Russian satellite smithereens, a Russian Progress cargo ship docked at the station and fired its thrusters for about five minutes, which boosted the ISS into an orbit a little less than a mile above its old one.

Mission Control, a few hundred miles away on Earth, schedules maneuvers like the October 24 boost days in advance. It takes that long to calculate a new trajectory: what’s the safe orbit the ISS is aiming for? How much thrust will it take to get there? Is that orbit in the path of any other satellites? Formally, it’s called a Pre-Determined Debris Avoidance Maneuver.

“We have a flight control position in Mission Control Houston called TOPO (stands for Trajectory Operations Officer) that manages the orbital trajectory of the space station,” explains a NASA spokesperson. “They work directly with U.S. Space Command (USSPACECOM) who are responsible for tracking and cataloging satellites and debris in orbit around the Earth. USSPACECOM screens the ISS path against their catalog of objects several times a day, and if anything is predicted to pass within a ±2 km x 25 km x 25 km area of the space station in the coming days, they send TOPO a notification along with the time of closest approach.”

What if there’s not enough time to plan evasive maneuvers?

That’s when the crew has to prepare for a possible emergency. For most ISS crew members, that means rounding up important items and closing the hatches between pressurized sections of the station so that if one module is damaged, it won’t depressurize the others. It’s the spacefaring version of a naval vessel closing all of its watertight hatches before sailing into a battle.

A few minutes before the possible impact, crews make their way to the lifeboats — in other words, to the docked spacecraft that will be their ride home (and their only shelter) if the ISS is damaged beyond repair.

In his book Endurance, Scott Kelly describes a close call with a defunct Russian satellite in 2015, during which he sheltered in a Russian Soyuz capsule with cosmonauts Gennady Padalka and Mikhail Kornienko. Kelly and his crewmates found themselves staring out the Soyuz capsule’s windows into the darkness, even though they all know the approaching satellite will be moving too fast to see whether it hits them or not.

Mission control had calculated down to the second when the satellite would whiz past the ISS, and as the moment of truth approached, Kelly’s focus shifted from the window to the clock.

“Once the time gets down to seconds, I feel myself tensing, starting to grimace. We wait. Then… nothing,” he writes. “Thirty seconds go by. We look at one another with a last heartbeat of anticipation of disaster. Then our grimaces slowly turn into expressions of relief.

What happens if something hits the ISS?

In Endurance, Kelly describes how cosmonauts Padalka and Kornienko summed things up waiting in the dark of their Soyuz capsule in 2015.

“‘You know,’ Gennady says, ‘it will really suck if we get hit by this satellite.’

According to NASA, most of the crew compartments and pressurized tanks that make up the International Space Station “will normally be able to withstand the impact of debris as large as 1 centimeter in diameter.” That covers about a million tiny bits of floating trash: paint flecks, the smallest bits of debris from orbital mishaps, little pieces of stray hardware, and so on.

Anything bigger than a centimeter wide is potentially much more dangerous. We picture space debris — and the ISS itself, often — as just floating lazily in space, but it’s actually moving very fast, at around 25,000 to 50,000 kilometers per hour. At that speed, a centimeter-sized object would strike the ISS with about ten times as much force as a similarly-sized bullet fired from a gun here on Earth.

And something even larger — one of the 25,000 known pieces of debris more than 10 centimeters wide, which include things like the defunct satellite Kelly’s 2015 crew passed by — would be devastating. Had the satellite hit the ISS back in 2015, it would likely have vaporized most of the station on impact, according to Kelly, who found closing the station’s hatches a futile exercise in the face of that possibility.

That’s why ISS crews and their mission controllers on Earth give space debris such a wide berth, keeping several kilometers between the station and any possible collisions.

“The ISS will normally maneuver away from the object if the chance of a collision exceeds 1 in 10,000,” says NASA.

How often does ISS have to dodge space debris?

Counting the October 24 maneuver, the ISS has shifted its orbit 32 times to dodge a chunk of space junk or a dead satellite. That’s about 1.5 evasive actions a year since 2000 on average, but a NASA spokesperson says the actual frequency varies.

At the moment, the station’s biggest orbital debris problem is a tie between the scattered remains of a Pegasus rocket upper stage (the same kind of rocket that launched NASA’s NuSTAR telescope) and those of a Chinese satellite, Fengyun 1C, which China blew up in an anti-satellite missile test in 2007. NASA tells Inverse that the ISS has had to dodge bits of each of those spacecraft three times.

The 2015 shelter-in-place episode Kelly describes in Endurance was the fifth such incident since 2000.

Is the space debris problem getting worse?

At the moment, there are about 9,000 metric tons of junk orbiting our planet, ranging from paint flecks to whole satellites that have run out of fuel or otherwise stopped working — and we keep adding more. That happens when space agencies or private companies don’t arrange for their satellites to fall back into Earth’s atmosphere at the end of their lives, when a rocket stage or a whole spacecraft blows up, when two satellites collide (as an Iridium communications satellite and a Russian Cosmos satellite did in 2009), or when a country blows up one of its own satellites in order to demonstrate that it has the power to blow up somebody else’s satellites.

That’s exactly the kind of test that destroyed Cosmos 1408, forcing the ISS to keep dodging bits of its debris for at least several more years. A few weeks before the station’s most recent evasive action on October 24, the U.K. became the latest country to ban such anti-satellite missile tests — joining Canada, Germany, Japan, New Zealand, South Korea, and the United States. Russia and China are notably absent from that list.

But while they last, those fragments are still potentially a huge problem, especially in the immediate aftermath of a missile test, a collision, or a rocket mishap.

“For the first few days after the event, you always have a dark risk because you know you’re surrounded by fragments, and you don’t know where they are,” said Holger Krag of the ESA’s Space Debris Office back in 2019.

But even without deliberately blasting old satellites into thousands of pieces of space debris, the few hundred kilometers of space around our planet are getting more and more cluttered. New space missions add about 40 to 50 objects a year to the ever-growing cloud of flotsam, and jetsam in Earth orbit, usually in the form of metal slag from solid rocket motors or new satellites that will just keep circling the planet once their fuel runs out or their communications systems make them unsteerable.

And each of those junk satellites is a thousand or more bits of smaller debris just waiting to happen. Currently, the single biggest source of space debris is still a 2009 collision between the Iridium-33 satellite and the Cosmos-2251 satellite, which ISS has had to dodge three times already.

About once a year, the International Space Station takes evasive action to avoid colliding with a chunk of space junk. The most recent maneuver happened last week when the ISS boosted itself into a higher orbit to avoid debris from a 2021 Russian anti-satellite missile test. It’s likely that such close calls will only get…

About once a year, the International Space Station takes evasive action to avoid colliding with a chunk of space junk. The most recent maneuver happened last week when the ISS boosted itself into a higher orbit to avoid debris from a 2021 Russian anti-satellite missile test. It’s likely that such close calls will only get…