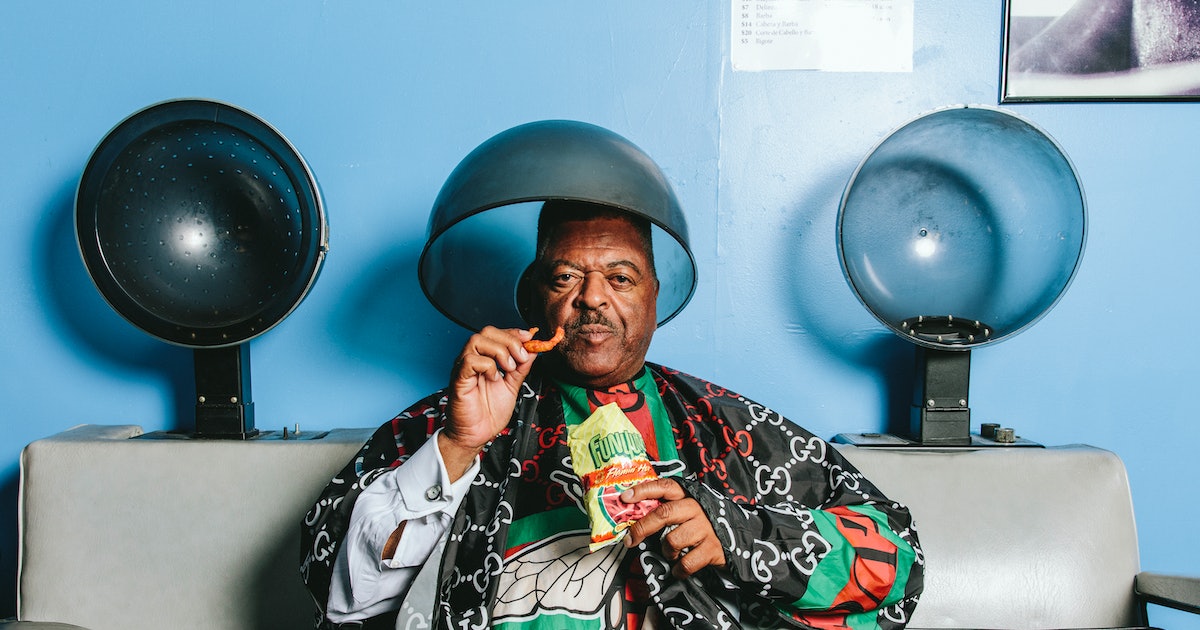 As his catfish dinner gets cold at the Twist Midtown Bar & Grill in Jackson, Tennessee, one evening in late March, Sammy Stephens directs a young waiter’s attention to his laptop.

Stephens, wearing a button-down shirt under a sleeveless sweater vest, is 65 but could pass for a decade younger. He hits play on a YouTube video. “Look, that’s me,” he proudly tells the waiter, pointing at his chest.

On the screen, a younger version of Stephens jumps to life inside the flea market he used to own in Montgomery, Alabama.

“Living rooms, bedrooms, dinettes, oh yeah!” he raps over an old-school beat, dancing from side to side in and around the flea market, his eyes opening wide, as if he’s staring right into your soul. And then there’s the indelible chorus the video has become synonymous with: “It’s just like, it’s just like, a mini-mall!” The video plays for just over two minutes — it is the “long version,” after all — before it fades to black.

The waiter is very sweet with Stephens, unfazed by the fact that his computer’s tinny speakers are cranked all the way up. “Just look at all those hits,” he says wistfully. Almost 12.5 million. Once the clip is done, the waiter breezes away to take care of some other patrons.

The commercial, released in 2006, was designed to bring more traffic to the flea market, and it worked. And there’s no denying that the song is catchy. Catchier than it has any right being. That makes sense since Stephens says he put it together with a seasoned music producer and broadcaster friend named Terrence.

The ad caught the attention of The Ellen DeGeneres Show, and later that year, Stephens had his shining moment, dancing his way onto the show’s stage to chat with DeGeneres.

The commercial subsequently was parodied on The Cleveland Show and Reno 911! and continued to rack up hits on YouTube, where it still receives comments to this day: “This man has back pain [from] carrying the entire rap genre.” “If this was a YouTube ad, I would never skip again.” “This has been living rent-free in my head for the past 14 years.”

Later, I watch the waiter tell some regulars at the bar that she was waiting on a celebrity earlier that evening. Stephens’ name doesn’t ring any bells with the patrons, but there are some glimmers of recognition on their faces when she pulls the video up on her phone.

One of them, a displaced Alabamian, even hums along for a few seconds before turning his attention back to the March Madness game on the TV above the bar.

You can’t blame them for their tepid reaction. After all, Stephens has more or less disappeared from the public consciousness since he closed the flea market in 2011. He did pop back up on YouTube in 2016 to make videos endorsing Bernie Sanders and rapping about Pokémon, but to date, those clips have only garnered about 50,000 and 10,000 views, respectively.

Stephens’ absence from the public eye has led to all manner of online speculation. Some YouTube and Reddit commenters have suggested that he switched career paths and became a preacher — something he would probably excel at — or even that he had died.

Then, earlier this year, I read that Stephens was trying to make it back into the spotlight by auctioning an NFT of his viral mini-mall rap video, along with the actual cream suit he wore in it. (“I’ll throw in the shoes too, if I can find them,” he tells me.)

But why now? I wondered. And where had he been all these years? So I got in touch with Stephens, hopped on a transatlantic flight, and traveled 4,000 miles to find out.

Over dinner at the restaurant, just off the lobby of the Doubletree Hotel, Stephens suggests a higher-end bourbon I should try after I tell him that my expense budget is covering the tab. He, meanwhile, tells the waiter that he’s fine with water. Then he fills me in on where he’s been all these years — and where things went wrong.

Just two years after he went viral, the great recession hit. “People would come to the flea market,” he says. “But it was to take pictures with me and get autographs.” Then they would leave empty-handed. “That took me down, and it was hard to get up again.”

Meanwhile, he wasn’t getting paid for the video. The most-watched version of the Flea Market Montgomery rap was uploaded by a YouTube user named teedadawg in 2006, so Stephens wasn’t able to monetize his commercial at its peak. (He has attempted to contact teedadawg over the years without any luck. Likewise, teedadawg didn’t respond to a request for comment.)

Rather than have YouTube take the viral video down and start from scratch, Stephens registered his song with BMI, the music rights management organization. Thanks to BMI’s blanket license with YouTube, he is able to collect royalties every time the song is played on the platform. He still receives modest royalty checks all these years later.

While his flea market floundered, Stephens made money doing TV commercials for other businesses — everything from used car lots to the Atlanta Braves. But viral fame is incredibly fleeting, and eventually, demand for his services dried up.

In the wake of a tough divorce, Stephens closed down Flea Market Montgomery, and the newly single father of four then-teenage kids relocated to Jackson, Tennessee. A born hustler — he was washing cars for $2 a pop by age 12 and selling vegetables from the back of his brother’s truck by 16 — he has been a salesman in local car lots ever since the big move.

Over the past decade, Stephens has focused on his mental health. “I went through some type of depression,” he says. “I felt like I needed to take a long vacation, and that’s what being here” — in Jackson — “has been like.” He adds, “I needed a little peace in my life, and I finally have that. I’m good now.”

And with that peace came the itch to get back into the game. In 2021, Stephens joined Cameo, where his video greetings start at $99. He offers fans sporadic updates via Instagram and Twitter with the help of his son, Torrey Davone. Stephens has a TikTok account, too, but he seems to have given up on it after making only one video. “Everything the kids are doing on TikTok? I started that,” he says. “I’m the godfather of — what’d you call ’em? — memes.”

As to how Stephens got swept up in this Web3 business, he tells me that he was approached by the Paris-based Alban Ramond to mint and sell the NFT on his behalf in exchange for an undisclosed commission. Ramond, I later learn, is the head of sales for the French arm of Uber.

I get in touch with Ramond, who tells me he has been dabbling with crypto and NFTs for five years. “Why the interest in Sammy?” I ask — admittedly skeptical — at the onset of our video call. He explains that he was introduced to Stephens’ video by an American ex-girlfriend with a penchant for memes.

Like me, Ramond has been a fan of Stephens for a long time — although we both acknowledge the absurdity of being a “fan” of someone from a blurry commercial of a flea market located half a world away — and wanted to help him make some money.

He approached Sammy with the idea of selling his video as an NFT and told him how Farzin Fardin Fard, founder and chief executive of Dubai-based 3F Music, had made a name for himself snapping up meme NFTs in the spring of 2021.

The process of making the NFT a reality turned out to be a slow one, with draft contracts flying back and forth between lawyers in Jackson and Paris. In the end, it took until February 2022 — almost a year after peak meme NFT fever — for the Flea Market Montgomery NFT to be minted.

The highest offer received by Flea Market Montgomery on OpenSea so far is 0.1 ETH, currently worth around $1,500. But a microsite created to promote the NFT is no longer active, and Ramond has since told me that he and Stephens are no longer working together on the sale.

Back in March, Stephens was more hopeful, telling me he hoped to earn a $1 million payday. He has plenty of other big ideas — new raps, book and movie concepts, brand partnerships — but it isn’t immediately clear which are in the works and which only exist as pitches dating back to the Flea Market Montgomery days.

As our time together comes to a close, I ask, “Do you ever get tired of the mini-mall rap?” Stephens smiles and replies, “It makes money. How could I get tired of that?”

We say our goodbyes in the parking lot, and I thank Stephens for his time.

He raises his palms to the sky as if to say, “That’s all folks,” before disappearing behind a parked car and into the night. Then there’s nothing but the sound of crickets and passing traffic on Route 45.

As his catfish dinner gets cold at the Twist Midtown Bar & Grill in Jackson, Tennessee, one evening in late March, Sammy Stephens directs a young waiter’s attention to his laptop. Stephens, wearing a button-down shirt under a sleeveless sweater vest, is 65 but could pass for a decade younger. He hits play on a…

As his catfish dinner gets cold at the Twist Midtown Bar & Grill in Jackson, Tennessee, one evening in late March, Sammy Stephens directs a young waiter’s attention to his laptop. Stephens, wearing a button-down shirt under a sleeveless sweater vest, is 65 but could pass for a decade younger. He hits play on a…

Black Panther 2 is wading into the messy history of Atlantis

Is it finally time to stop drug testing workers?