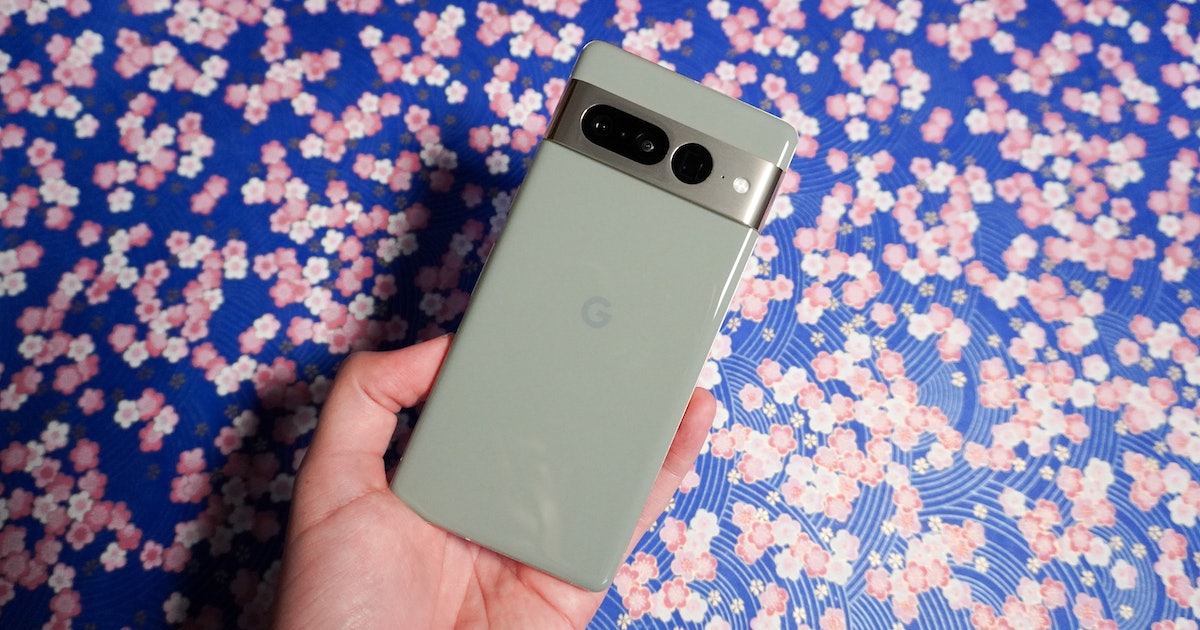 6 features ranked from best to worst

Not just because Google announced its own phone months before release to get ahead of leaks. No, the Pixel 7 Pro is familiar because largely, it looks a lot like the Pixel 6 Pro.

Google’s new $899 flagship Android phone arrives in a year when the company isn’t so much trying to sell cutting-edge software or hardware, as it is an entire ecosystem of products including the Pixel Watch, Nest smart home devices, and Pixel Tablet (coming in 2023). Apple’s “walled garden” strategy is all about making its devices easier to use together and making the advantages inside the “garden” — like iMessage — too enticing (or hard) to leave behind. With this year’s Pixel products, Google’s finally offering its far more benevolent take on the same idea.

Buying a Pixel 7 Pro isn’t just buying Google’s best version of an Android phone, it’s buying into an ambient computing vision where machine learning works in the background to make everything better, while on the surface, interacting with the Google Assistant or the Pixel’s camera are as simple as possible. That means this year’s Pixel smartphone upgrades aren’t as eye-catching as previous years, but they are quietly impressive. Whether you should upgrade from an existing Android phone or jump ship from an iPhone is entirely down to personal preference.

Inverse may receive a portion of sales if you purchase a product through a link in this article.

The best of Pixel 7 Pro

4. The hardware is better than ever

The look of the Pixel has always been an acquired taste. Even with some questionable aesthetic decisions in the rearview mirror (who could forget the “bathtub” notch on the Pixel 3 XL?), the Pixel 6 and 6 Pro were polarizing redesigns, over-emphasizing the camera bump and Google’s penchant for two-tone colors to a dramatic degree. The Pixel 7 and 7 Pro feature refinements on that vision — the metal camera bar fades smoothly into the edges without seams and the edges dig less into your hand for a more pleasant grip — without going back to the drawing board. The Pixel 7 Pro isn’t going to change anyone’s mind, and it doesn’t need to change mine — I simply love it.

The Hazel Pixel 7 Pro (Google’s gray-green option) looks great in and out of a case. The Gorilla Glass Victus front and back panels feel very sturdy combined with the recycled aluminum frame. And other than going with a glossy, easy-to-smudge finish, the whole package feels very premium. The front, slightly curved-along-the-edges 6.7-inch QHD+ screen looks good in direct sunlight and indoors — it’s big and bright. Thanks in part to a dynamic refresh rate (enabled by an LTPO display) the screen can also toggle anywhere between 10 and 120Hz refresh rates to keep things smooth while conserving battery.

Do I personally believe we’ve strayed down the wrong path by conflating high-end or “Pro” phones with curved displays? Absolutely. Did I get over it eventually? I did. Holding the Pixel 7 Pro really only becomes a problem when you feel its weight — at 212 grams, it’s lighter than the Pixel 6 Pro (210 grams) and iPhone 14 Pro Max (240 grams). With a 5,000 mAh battery (fast charging support in tow) and all that metal and glass, the Pixel 7 Pro isn’t exactly the most comfortable phone to hold for a long period of time. That could be my small phone bias, but it definitely made me miss the Pixel 6a.

The camera is often the centerpiece of Google’s smartphones and this year is no different. While the Pixel 7 Pro features some similar ideas to what Apple has packed into its latest iPhone 14s, the improvements that Google has made to its computational photography stack show there’s still more that can be achieved with machine learning.

Google highlighted multiple new AI camera tricks in the Pixel 7 Pro, but the two most impressive are the updates to Super Res Zoom and the addition of Photo Unblur.

The improved Super Res Zoom features a wider range of zoom lengths from 2x all the way up to 30x with some new tricks to make photos sharper at higher resolution and at longer zoom ranges. For 2x zoom, now the Pixel 7 Pro (and Pixel 7) crops a photo from the 50-megapixel main lens sensor and then de-noises it for what is a 12.5-megapixel 2x shot; this is the same way the iPhone 14 Pro achieves a 2x photo using its 48-megapixel main sensor. At greater zoom lengths, the Pixel 7 Pro combines a 2x shot created from the aforementioned crop of the 50-megapixel sensor with a shot from the telephoto lens, and runs both through a machine learning model to create a composite that’s sharper than what you’d normally capture at 5x zoom. At 10x, Google runs through the same cropping and de-noising process with a cropped telephoto shot as a starting place.

In practice, this system works surprisingly well. The best results are definitely still between 2x and 5x, but 10x shots absolutely look clearer and crisper, and even though 30x is maybe more than anyone needs, it’s pretty cool that Google’s pulling it off. Some of these quality improvements have to do with better stabilization across the board. In my experience, your movements feel a lot less erratic at higher zoom levels. You’ll still have to account for your movements, but nailing a stable shot is a lot easier now.

Photo Unblur is a subtler beast. Google basically uses machine learning to look at a blurry photo — whether it was shot on a Pixel 7 Pro or not (as long as you’re using Google Photos) — and attempt a touch-up pass, clearing up faces, bringing them into focus, and removing some noise. The result is clearer photos, where ideally, the people you care about are easier to see. My results were less dramatic than Google’s, but I did notice a difference. Eyes and mouths were made noticeably sharper, and in general, faces were easier to pick out than they were before, even on old photos shot on my iPhone. Photo Unblur isn’t perfect — sometimes the sharpening can look really artificial — but it’s neat when it works (you can also dial back on the sharpening in Google Photos if it’s too much).

The Pixel 7 Pro’s camera performance on the whole is as good as the Pixel 6 Pro’s, but Google differentiates itself with added perks, like accessibility features such as Guided Frame. With TalkBack (the Pixel’s screen reader) turned on in Settings, Guided Frame automatically walks Pixel 7 owners who might be blind or have a harder time seeing their screen through taking a selfie. Using the front-facing camera and knowledge of the best angles to take a selfie, Guided Frame verbally directs where to move your phone and then automatically snaps a photo. It’s a simple feature that seems obvious in retrospect, but I’m glad Google’s highlighting it as a selling point as opposed to making it a footnote.

The brain behind the Pixel 7 Pro’s machine learning and AI-enabled features is the Tensor G2 chip, Google’s second-generation custom silicon. It’s more than capable for casual mobile gaming — may I recommend Netflix’s rapidly improving catalog of games — and totally fine for heavy hitters like Genshin Impact or Diablo Immortal. The problem isn’t how much faster the Tensor G2 makes the Pixel 7 Pro at voice dictation (very fast and very accurate) but whether the chip can go the distance a few years from now. The Pixel 6 series had its fair share of hardware and software issues, and slow rollout of fixes. I didn’t notice anything unusual in my week with the Pixel 7 Pro, but that doesn’t mean it’ll be behaving the same way six months from now. As any Pixel owner can attest, it never hurts to be cautious.

The worst of Pixel 7 Pro

2. Google should have left Cinematic Blur on the iPhone

I’m less pleased with the new Cinematic Blur video option, which tries to recreate the shallow depth of field (a.k.a. bokeh effect) and rack focus you might get shooting video with a traditional camera and lens. The resulting blurs never look natural — Google’s examples have an unnatural glitchiness to them — even if they recreate the rack focus effect as they should. I have the same issues with Cinematic mode on the iPhone. Apple added the feature on the iPhone 13 and I’ve never been able to make it behave in a way that looked good. The issue isn’t really shifting the focus here, it’s having a blurred background that doesn’t appear artificial. It’s a shame because, otherwise, video on the Pixel 7 Pro is pretty great. Video stabilization is smooth — definitely on the level of current iPhones.

1. Face Unlock is not a substitute for the fingerprint reader

Google added the option to unlock your Pixel 7 or 7 Pro with your face rather than just the under-display fingerprint reader it’s used on its last few phones. The company is only using the front selfie camera to determine whether it’s actually you using your phone, and while it’s more secure than you might expect (I couldn’t fool it with a photo of me) it’s not using the same kind of 3D depth data or IR map of your face that Face ID on an iPhone uses.

The Pixel 7 Pro’s Face Unlock is less accurate in the dark, and there’s currently no option for it to work around a face mask like on iPhone. Fingerprint Unlock is just better, and I certainly had more peace of mind using it than I did Face Unlock, even though it is convenient to unlock with a glance.

The Pixel 7 Pro isn’t really selling itself, it’s selling the entire Google ecosystem, and as an onboard for the Pixel phones’ legitimately helpful features, it’s an excellent one. I can quibble at Google and Apple’s back-and-forth copying of each other, but this year’s Google phone is a good Google phone. And for over a hundred dollars less than an equivalent Samsung Galaxy or iPhone, it’s a pretty good deal, too.

The Pixel 7 Pro might look familiar. Not just because Google announced its own phone months before release to get ahead of leaks. No, the Pixel 7 Pro is familiar because largely, it looks a lot like the Pixel 6 Pro. Google’s new $899 flagship Android phone arrives in a year when the company isn’t…

The Pixel 7 Pro might look familiar. Not just because Google announced its own phone months before release to get ahead of leaks. No, the Pixel 7 Pro is familiar because largely, it looks a lot like the Pixel 6 Pro. Google’s new $899 flagship Android phone arrives in a year when the company isn’t…