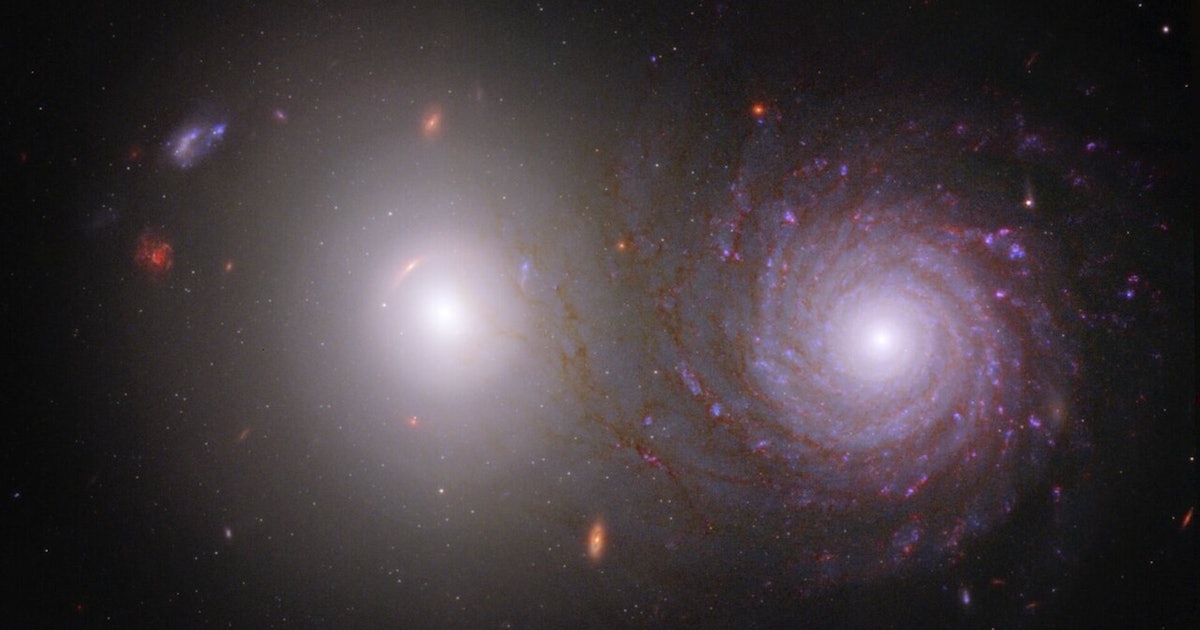 And the light being shed, in this case, comes partly from the elliptical galaxy on the left side of the image. Astronomers used Webb and Hubble to watch the light from the elliptical galaxy, which is farther away than its partner, shining through the dusty arms of the spiral galaxy. The two galaxies are close neighbors, but not quite close enough to be in danger of colliding and merging.

In fact, the elliptical galaxy on the left is doing a lot of work in this image. Not only is it backlighting the dust in its neighbor’s spiral arms, but it’s providing a gravitational lens to reveal a distant galaxy that astronomers had never seen before.

A galaxy far, far away — The reddish arc just above and to the left of the elliptical galaxy, at about the 10 o’clock position, is actually another galaxy, stretched and warped by the effects of the gravitational lens, which bends the distant galaxy’s light around the closer elliptical galaxy’s mass. A red dot at about the 4 o’clock position is another refracted image of the same distant galaxy.

That light from that far-off galaxy is so faint and so red that it didn’t show up in Hubble’s images of the VV 191 — but Webb’s near-infrared camera, NIRCam, was designed to spot galaxies exactly like this one. And that’s why team-ups between Hubble and Webb produce such stunning images; Hubble sees the universe mostly in the same wavelengths of light that our eyes see, plus ultraviolet. Webb sees the universe in infrared wavelengths. Combining the two gives astronomers a much more complete picture of objects like VV 191, and what’s happening in the distant background of the image.

Galaxy pair VV 191 is one of about 2,000 pairs of superimposed galaxies — pairs of galaxies in which one seems to be in front of the — spotted by volunteers in the Galaxy Zoo project. Galaxy Zoo recruits astronomy enthusiasts to classify different types of galaxies in images from the Dark Energy Camera Legacy Survey, or DECaLS. The volunteers help process the sheer volume of data collected by the survey, and their work sometimes yields interesting results, such as this galaxy pair.

“VV 191 is the latest addition to a small number of galaxies that helps researchers like us directly compare the properties of galactic dust,” Webb interdisciplinary scientist Rogier Windhorst and his colleagues wrote in a recent blog post for NASA.

Why dust matters — Space dust is incredibly important. Most significantly, it’s the key to building new stars and planets; dust grains give interstellar matter a place to coalesce, and eventually, those clumps of matter grow and combine into something big enough to ignite a nuclear furnace at its heart. Mapping the dust in a galaxy can offer clues about where and how stars form.

“Dust changes the brightness and colors that appear in images of the galaxies,” Windhorst and his colleagues write. The better astronomers understand where to look for dust and how it affects a galaxy’s appearance, the easier it is to tell a distant galaxy from a dusty one.

The latest image from the James Webb Space Telescope — joining forces once again with the Hubble Space Telescope — sheds light on the long, dark arms of a dusty spiral galaxy. And the light being shed, in this case, comes partly from the elliptical galaxy on the left side of the image. Astronomers used…

The latest image from the James Webb Space Telescope — joining forces once again with the Hubble Space Telescope — sheds light on the long, dark arms of a dusty spiral galaxy. And the light being shed, in this case, comes partly from the elliptical galaxy on the left side of the image. Astronomers used…

How the Moon formed and more: Understand the world through 8 images