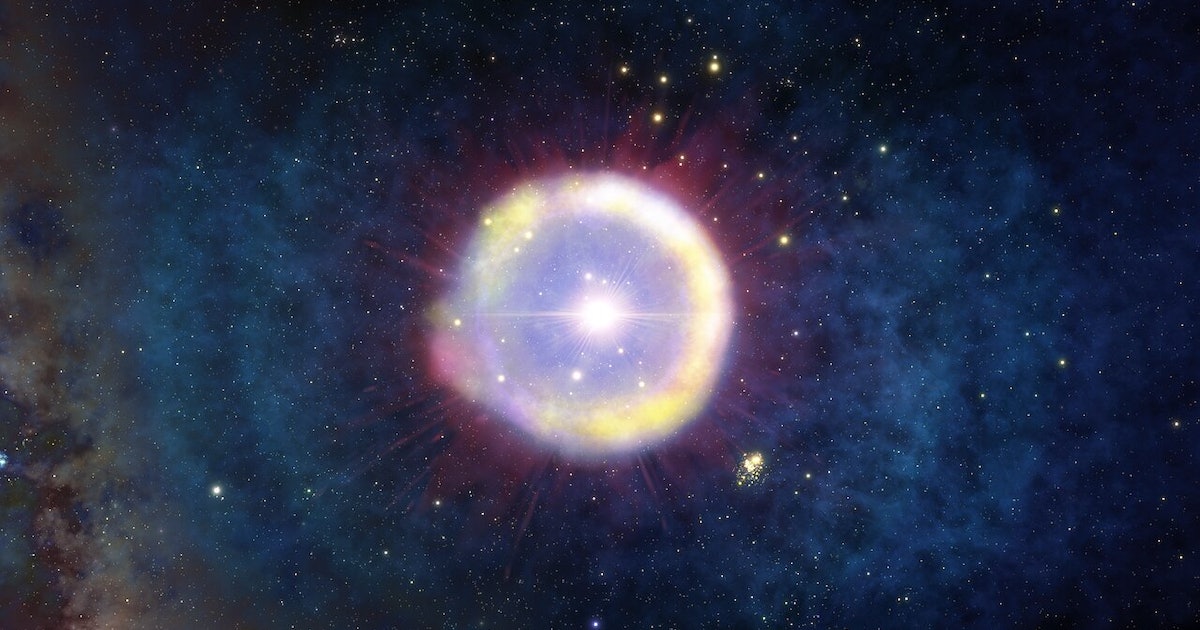 13.1 billion years ago, one of the universe’s first stars exploded.

When a massive star dies, the supernova typically blows the outer layers of the star into space, leaving the star’s collapsed core behind as either a neutron star or, for the most massive stars, a black hole. But this ancient first-generation star was so massive that its final explosion blasted every single atom of the star’s mass into space, leaving nothing behind — except the star’s chemical fingerprint, smeared across the center of its host galaxy.

Now a team of astronomers, analyzing data from the Gemini North radio telescope in Hawai’i, says they’ve identified that chemical fingerprint for the first time. They published their results in The Astrophysical Journal.

What’s New – The researchers, led by Yuzuru Yoshii of the University of Tokyo, used a new method to analyze old data from 2017 and 2019, when Gemini North first measured the bright infrared glow of gas falling into the oldest supermassive black hole ever discovered. The spiraling disk of gas around an actively feeding supermassive black hole is always bright, but the ones that release the most energy are called quasars. A quasar like ULAS J1342+0928, the one Yoshii and his colleagues studied, is thousands of times brighter than our whole galaxy.

This particular quasar is ancient even in astronomical terms. According to a study published in 2020, it’s 13.1 billion light years away, so astronomers see it as it looked 13.1 billion years ago, or about 700 million years after the Big Bang. ULAS J1342+0928 is the second-oldest quasar that astronomers have discovered so far. (The oldest is called P172+18.)

And according to Yoshii and his colleagues, it may contain direct evidence of something even older: one of the first generation of stars that ever formed.

Here’s The Background – Most of the chemical ingredients that make up our current universe were forged in the cores of massive stars, or in the tremendous pressure of their final collapse. Each new generation of stars contained a slightly different mix of elements than the last, so the chemical fingerprint of the universe’s first stars should look very different from that of a star like our Sun. And comparing the two can tell scientists something about how the universe evolved, and, in the very long run, how we got here.

Back in 2017 and 2019, Gemini North’s instruments measured the spectrum of infrared light coming from the distant quasar (in other words, they split the quasar’s light into the individual wavelengths that make it up; this is useful because astronomers can tell what an object is made of based on the wavelengths of light it absorbs and emits).

Yoshii and his colleagues found that the quasar contained an unusually large amount of iron, compared to an unusually small amount of magnesium. This was extremely unusual. In fact, it seems to match what computer simulations predict you’d end up with if a first-generation star about 300 times the mass of our Sun exploded — in a type of supernova so rare that no one’s ever seen it happen or found direct evidence of it.

Physicists predict that any star more than 150 times the mass of our Sun will meet an especially violent end. At the core of such a gargantuan star, the heat and pressure are so intense that they actually convert photons — a unit of light — into electrons and their antimatter rivals, positrons. That’s a huge problem for the star because the pressure of all those photons pushing their way upward from the center is all that keeps the star from collapsing under its own tremendous gravity. With photons getting squished into matter, gravity takes over, and the star collapses.

Astrophysicists call this a pair-instability supernova. They are so rare (because the incredibly enormous stars that cause them are so rare) that the odds of astronomers ever actually seeing one happen are vanishingly small. The best evidence of one of these epic supernovae is probably in the chemical fingerprint of the star, scattered all over interstellar space by the explosion.

And that’s what Yoshii and his colleagues say they’ve found in the spectrum of the quasar ULAS J1342+0928: the chemical fingerprint of one of the first stars in the universe, which formed about 100 million years after the Big Bang, and later collapsed and exploded in a pair-instability supernova when the universe was still just a tiny fraction of its current age.

Why It Matters – The period when the first stars flared to life is still a bit of a mystery to physicists, at least when it comes to specific details. Even with an extremely powerful telescope like the James Webb Space Telescope, the universe’s oldest stars are nearly impossible targets: They’re distant, relatively faint, and hidden behind thick clouds of hydrogen. But if it’s possible to find their chemical fingerprints on objects that astronomers can see, that could open up a whole new way to study the distant past.

13.1 billion years ago, one of the universe’s first stars exploded. When a massive star dies, the supernova typically blows the outer layers of the star into space, leaving the star’s collapsed core behind as either a neutron star or, for the most massive stars, a black hole. But this ancient first-generation star was so…

13.1 billion years ago, one of the universe’s first stars exploded. When a massive star dies, the supernova typically blows the outer layers of the star into space, leaving the star’s collapsed core behind as either a neutron star or, for the most massive stars, a black hole. But this ancient first-generation star was so…

In a first, scientists show dogs can smell when humans are stressed