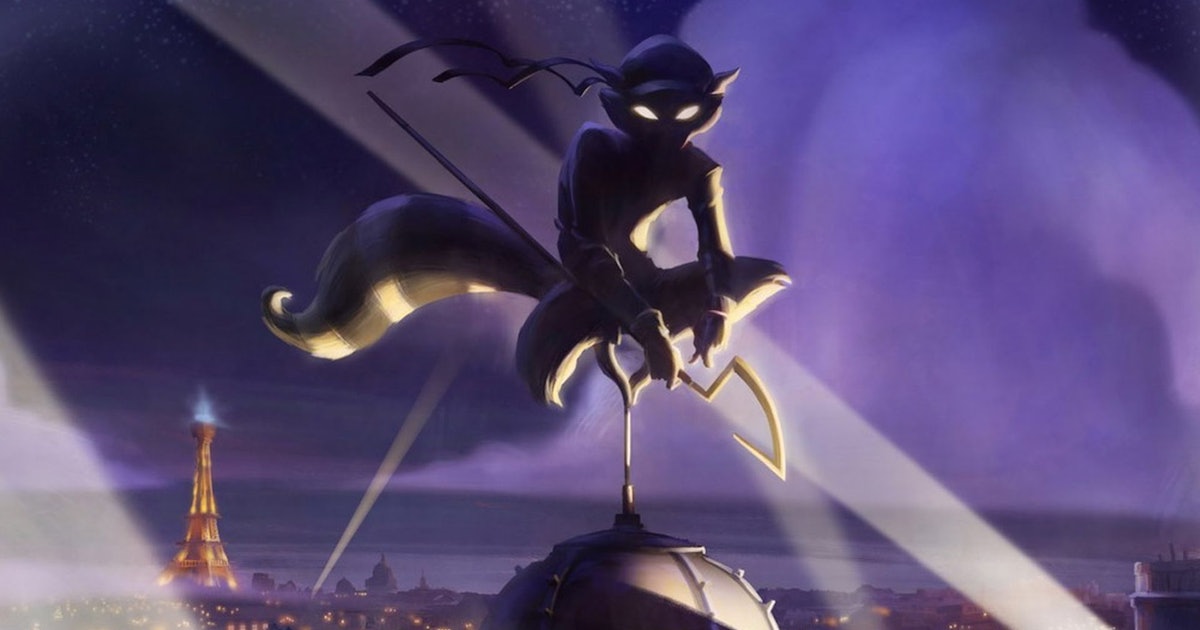 The PlayStation 2 was a formative console. Not just for Sony but also for the studios making games on the platform. the PS2 would go on to be the best-selling home console to date, defined by a myriad of classic games from now big-name developers. Naughty Dog, Sony Santa Monica, and Insomniac all have iconic franchises born out of this generation.

For Sucker Punch Productions, the cartoonish exploits of a master thief in Sly Cooper and the Thievius Raccoonus helped define what makes the studio’s games special — even after twenty years.

If you have ever looked at a raccoon and thought “their black face markings look like a cartoon robber’s mask” then you basically understand everything you need to know about Sly Cooper.

He is a raccoon who comes from a long line of master thieves, though tragically he grew up in an orphanage after both his parents were murdered. Sly Cooper and the Thievius Raccoonus puts players in control of Sly (and other members of his crew in special missions) as he tries to reclaim his family’s birthright by staging a series of elaborate heists against the group that took the lives of his parents.

Stealth mechanics are common in video games, Splinter Cell and Metal Gear Solid are both stealth forward action game franchises. Both of these are military fantasies where you play as basically a cop! In contrast, Sly Cooper makes you feel like an honorable thief, pulling off heists against absolute dirtbags.

There are five levels in Sly Cooper, each one tasks Sly and his gang with breaking into a massive evil lair of one bad guy or another. The levels are broken up into “Jobs” that narratively act as steps in a heist. There are research missions where you have to case the joint and gather information about security movements or computers that need hacking.

While Sly does have a cane to attack enemies with, he dies with one hit from an enemy. This fragility is a message from the developers that combat is definitely not the right way to go, maybe try to embody a thief. Levels are defined by lighting, paying attention to where Sly can be covered in shadow and avoiding the light means the difference between a successful job and being busted. The gameplay’s ability to speak to the narrative of the game itself helped set Sly Cooper and the Thievius Raccoonus apart from a sea of platformers that existed on the PlayStation 2.

In the holiday season of 2000, my older brother convinced our mother to buy a PlayStation 2 for Christmas. At the time I was three and too much of a literal baby to care.

Sly Cooper and the Thievius Raccoonus came out on September 23, 2002. At the time I was five and my earliest memories often involved watching my brother play games on the PlayStation 2. Sly Cooper entranced me with its cartoon style and talking animal characters. It reminded me of Disney’s Robin Hood, a movie I had watched on VHS repeatedly. I wanted to play Sly Cooper. I eventually did, after my brother beat it first. I loved it.

I played fewer and fewer games over the next several years until I convinced my mom to buy me a PlayStation 3 Slim in 2011. She drove me to GameStop and let me pick out some games. I asked the employee at the counter for recommendations. I left the store with Uncharted 2 and inFAMOUS.

The first time I played inFAMOUS, I loved it. It still holds up as one of the best superhero games around. I then learned that inFAMOUS developer Sucker Punch also created the Sly Cooper series. In hindsight, it made complete sense. inFAMOUS is a game so defined by its expertly crafted city that feels incredible to traverse, in many ways it feels like the natural open world progression from Sly Cooper’s traversal across ropes and rooftops. Both series offer the player upgrades through the course of the game that allows for new ways of exploring the game world.

Sucker Punch’s Ghost of Tsushima is often called an Assassin’s Creed clone for its stealth action gameplay, but it is equally reliant on the work done in Sly Cooper.

By creating a unique blend of stealth and world traversal, Sucker Punch found a core gameplay experience that continues to work even 20 years later. From the historical tale of Ghost of Tsushima to the cartoony heists of Sly Cooper, one thing remains constant — the view is better from the rooftops.

The Sly Cooper Collection is available now for PlayStation Plus Premium subscribers.

The PlayStation 2 was a formative console. Not just for Sony but also for the studios making games on the platform. the PS2 would go on to be the best-selling home console to date, defined by a myriad of classic games from now big-name developers. Naughty Dog, Sony Santa Monica, and Insomniac all have iconic…

The PlayStation 2 was a formative console. Not just for Sony but also for the studios making games on the platform. the PS2 would go on to be the best-selling home console to date, defined by a myriad of classic games from now big-name developers. Naughty Dog, Sony Santa Monica, and Insomniac all have iconic…