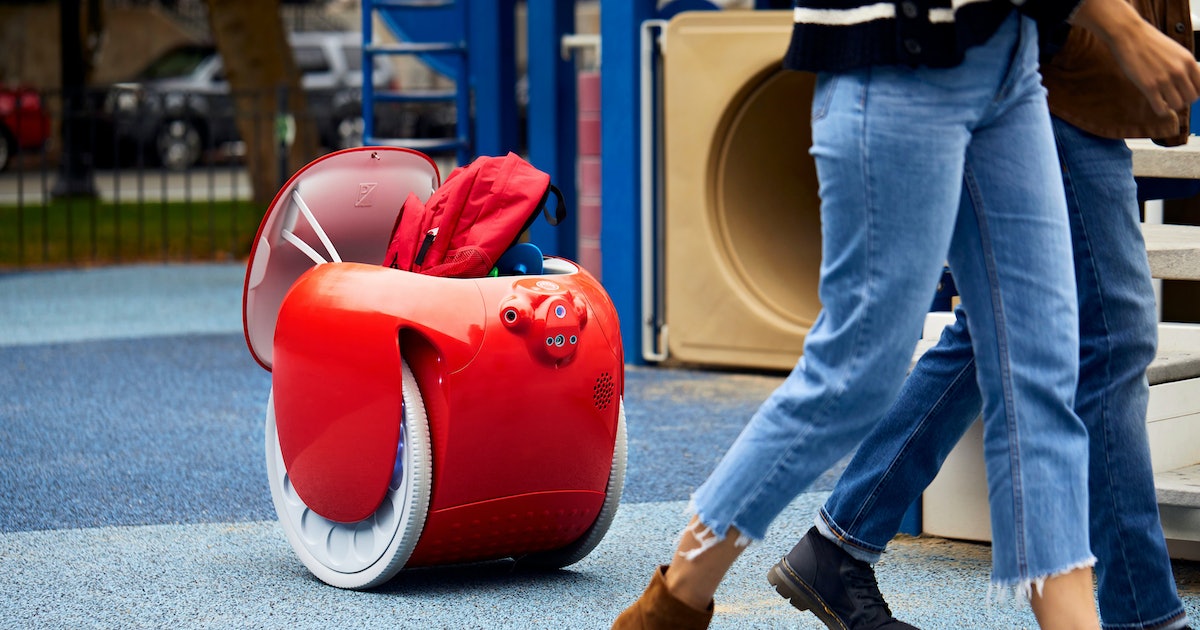 Being followed around is at best annoying (by a nagging sibling) and at worst terrifying (by a suspicious stranger). But imagine using the art of lurking to your advantage. That’s the plan for Piaggio, the Italian company behind the Vespa. Their new robots, gitamini and gitaplus, and the accompanying app can hang on to your every move, carry your crap, stream your music, and track your miles.

In a world plagued by constant screen time, the gita robots promise to hold on to your things and provide you the rare freedom to immerse yourself in the world — and finally get those 10,000 daily steps in.

“We took a position of, let’s try to compete with some of these options which are taking people out of the built environment more and more and on a screen,” says Greg Lynn, the co-founder and CEO of the robot-making subsidiary Piaggio Fast Forward (PFF). Lynn, who is also an architect, is interested in the ways people move about their environments.

You can currently buy the smaller gitamini, which can hold up to 20 pounds and comes with “pedestrian etiquette,” or the ability to dodge people and pass through the doorways, for $1,850. The gitaplus, which holds twice that, runs for $3,475 and will begin shipping in October.

The age of lurking robots

With the gita bots, Piaggio wanted to put its own spin on the rideshare and autonomous vehicle boom, Lynn says.

As he points out, Americans’ walking trips tend to be around a mile or less. People may be discouraged from longer strolls if they’re sporting, say, a heavy backpack, Lynn says. But he thinks a cargo-carrying robot could encourage people to go the distance instead of driving or hailing a ride.

“When it gets to be a mile and a half each way, people say, ‘You know, I’ve gotta carry this thing,’” Lynn says. “We focused on these kinds of environments where there’s a lot of people moving around and doing longer distances.”

For instance, it could be easier to walk to a somewhat distant Trader Joe’s via a route packed with pedestrians if you have a cargo-carrying robot that’s been trained to navigate crowded areas.

Instead of simply trying to adapt self-driving vehicle technology to sidewalks and assuming how pedestrians would react, Lynn and his colleagues took to the streets and studied how people meander through the world.

PFF has also recruited people to walk around six hours a day on custom-built sets that feature real-life obstacles like slopes, changes in terrain, and doorways. The company even tests with barriers like dogs, children, and suitcases that could, for instance, block the gita in an elevator.

The gita line is just one example of the pricey tracking robots that are increasingly present in our daily lives. You may have spotted the menacing yet hilarious Knightscope robot that patrols areas like malls and neighborhoods. It’s been criticized for its questionable efficacy and invasive methods of data collection.

This relatively recent technology could open up a whole new can of worms.

Amazon, meanwhile, is now selling limited quantities of the Astro, which can roam your house to detect intruders, follow you to deliver calls and reminders, or even provide entertainment — but unless you’re a special early adopter with an invite, most people will have to pay $1,449.99 for it.

This new batch of trailing devices poses fresh questions about data privacy: Similar to smartphones, they’re designed to move with us throughout our days. And just as iPhones and Androids have threatened the security of our personal information over the past decade or so, this relatively recent technology could open up a whole new can of worms.

How gita does its thing

The gita robots use multiple sensors to navigate their surroundings and move closely behind users. These include an RGB color camera, which replicates how people see the world, and a stereo depth camera, which simulates the way we perceive depth. There’s also a 4D radar-on-chip (RoC) that uses radio waves to determine the distance and angle of an object.

All of this information is captured and processed by the gita’s hardware every 33 milliseconds, mapping the robot’s precise path forward. “That’s pretty intense. It’s a lot of operation we have to do to make the motor drive in the right direction and follow the leader,” says Jean-Claude Coutant, the chief technology officer at PFF.

“When you walk around with a robot, people tend to come talk to you.”

The gita models are meant for a wide range of consumers, Lynn says, and the company is working to ensure that they can help people with disabilities. PFF has done research with people who use wheelchairs, walkers, canes, and service animals to learn how the gita can follow their movements.

In the U.K. at the Newcastle Center for Aging, researchers were surprised to find that gita robots can act as helpful conversation-starters for older users. “Frankly, when you walk around with a robot, people tend to come talk to you,” Lynn says.

The idea of a roaming companion that can help people with disabilities isn’t new, says Rory Cooper, a bioengineer at the University of Pittsburgh who researches assistive robotics.

Designing such a device comes with challenges: For example, it needs to fit in a car, airplane, or public bus. But it could potentially offer plenty of benefits for this demographic, he points out, such as the opportunity for wheelchair users to take them on a grocery trip.

“[The gita robots] are a good start, and if the manufacturers seek and integrate guidance from users, especially people with disabilities and older adults, the product and its interface could evolve and improve to be more inclusive,” Cooper says.

But the devices could complicate wheelchair navigation, he explains, which can already be challenging. He thinks the robot may have trouble tracking a powered wheelchair, which can move around 8 miles per hour — more than double the average walking speed.

Overall, he says, the design makes certain assumptions about gita users. “[The gita robots] are largely designed for people with high cognitive functioning and who are technologically savvy,” Cooper explains. “The cost is likely to be prohibitive for many people with disabilities.”

Older adults and people with walking challenges would benefit from a seat on the gita to rest on, Cooper adds.

Besides potential accessibility issues, the gita models also raise security concerns. This type of technology could potentially collect even more personal data than other consumer devices or robots already do, says Anna Chatzimichali, an engineer at the University of the West of England Bristol who co-wrote a 2020 paper on data privacy in human-robot interactions.

Chatzimichali and her colleagues found that the privacy policies vary widely between consumer robotics companies, including Dyson (which makes a robotic vacuum cleaner) and UBtech (the manufacturer of several service robots). Overall, these companies don’t have to meet any legal standards for data security practices — yet more following robots are bound to emerge in the next few years.

“Companies need to be more prepared to discuss privacy more openly,” Chatzimichali says. “There is currently a lot of reluctance to talk to researchers about these issues.”

As more following robots roll out, Chatzimichali recommends that manufacturers clearly define the information that stays with the robot versus what’s sent back to the company for troubleshooting or other purposes. Ideally, all of the data is handled on the machine itself, which makes it harder for hackers to intercept compared to information that’s delivered to a cloud system.

“At the moment, local processing is still challenging, but technologically this is becoming increasingly possible,” she says. “This might require more expensive hardware and more energy.”

As for the gita models, PFF says that all information stays on the devices. The company doesn’t send any data elsewhere, according to Coutant, and it disappears after it’s processed. The same goes for the accompanying phone app. If PFF were asked to locate a specific robot, Lynn says he wouldn’t be able to help them.

When gita links up to Wi-Fi, it uploads data such as battery level information and any software issues so that the company can improve its devices.

The Amazon Astro, on the other hand, sends some data, including video and voice recordings, to the cloud and encrypts it. But Amazon doesn’t really have the best track record of securing personal information.

As critics have pointed out, bringing robots with high-tech sensors into your daily life could leave you at the mercy of companies that have a financial incentive to sell your data. But we don’t truly know how things will play out — until more of these futuristic products actually show up on people’s doorsteps.

Being followed around is at best annoying (by a nagging sibling) and at worst terrifying (by a suspicious stranger). But imagine using the art of lurking to your advantage. That’s the plan for Piaggio, the Italian company behind the Vespa. Their new robots, gitamini and gitaplus, and the accompanying app can hang on to your…

Being followed around is at best annoying (by a nagging sibling) and at worst terrifying (by a suspicious stranger). But imagine using the art of lurking to your advantage. That’s the plan for Piaggio, the Italian company behind the Vespa. Their new robots, gitamini and gitaplus, and the accompanying app can hang on to your…