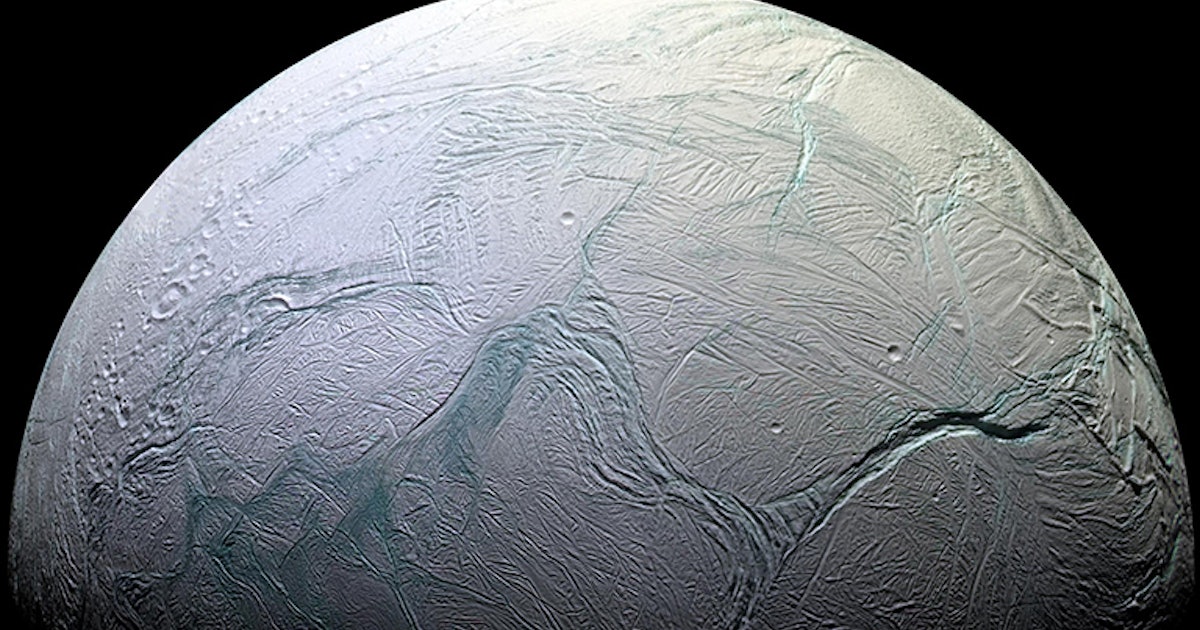 You need more than water to support life, and a recent model suggests that Saturn’s icy moon Enceladus could have the right stuff.

NASA’s late Cassini spacecraft didn’t find evidence of a key ingredient for life in the giant space geysers erupting from Enceladus, an ocean-world moon of Saturn, but planetary scientist Jihua Hao (of the University of Science and Technology of China) and his colleagues say their computer models of the icy moon’s geology and chemistry suggest it could be there anyway. They published their results in a recent paper in the journal Proceedings of the National Academy of Sciences.

What’s New — You need phosphorus to build a cell. It’s a key part of DNA and of ATP, the molecule that cells use to store and transport energy. There may be alternative ways to build those things, but we haven’t found them yet; life as we know it needs phosphorus.

“We don’t know if phosphorus is present in Enceladus’ ocean water,” planetary scientist Christopher Glein (of the Southwest Research Institute), a co-author of the recent study, tells Inverse, “although our modeling results make us optimistic that it is.”

They found that over time, phosphorus in the planet’s rocky core leaches out into the water lying on top of it (and flowing through it if the rock is porous in some places, which Hao and his colleagues, and other planetary scientists, say it probably is). It only took about 100,000 years for the simulated Enceladus ocean to dissolve about the same amount of phosphorus as the seas here on Earth.

“We found that the predicted concentration remained relatively high over a wide range of model possibilities,” says Glein. “This makes us confident that phosphorus will be abundant enough to support life, if life exists on Enceladus.”

Here’s the Background — So far, scientists haven’t found any sign of phosphorus in the data NASA’s Cassini spacecraft gathered when it swooped through Enceladus’s plumes back in 2017

But five years after the Cassini mission’s dramatic finale, scientists here on Earth are still combing through all the data the spacecraft sent home, and Hao and his colleagues say that so far, only the most common chemicals in the plumes have been accounted for — things like sodium and chlorine ions, for instance. Finding the chemical fingerprints of ingredients that show up in smaller amounts, like phosphorus, is going to take more work.

“Phosphorus is usually a trace component in surface waters of the Earth,” Hao tells Inverse.

The analysis that could identify trace elements like phosphorus — if they’re there at all — is now in progress. In the meantime, Hao and his colleagues wanted to explore the possibilities.

Why It Matters — Models like Hao and his colleagues’ can give the people sifting through Cassini’s data some hints about what to look for, and how much of it to expect. One important thing their model suggests is that it’s worth the effort to keep looking for traces of phosphorus in the Cassini data, because there’s a good chance of finding enough of it to support life.

Phosphorus seldom shows up on its own; most often, it binds to oxygen molecules to form a chemical compound called phosphate. But finding certain other phosphorus compounds — combinations of phosphorus and other elements — could suggest not just a livable environment, but actual life on Enceladus.

“If phosphate is present near the upper range of our concentration predictions, then we might hit pay dirt, so to speak,” says Glein. “Finding phosphate would be very exciting, because it would provide one more line of evidence that the ocean of Enceladus is habitable.”

What’s Next — Here on Earth, some microbes produce phosphates as a byproduct of all the other chemistry that keeps them alive. And on Enceladus, in particular, these complex molecules probably don’t just fall together by happenstance, because it takes energy input to form the specific bonds that hold them together, and that probably means some kind of life.

“On the other hand, life detection is such an important question that we can’t rely on any one potential biomarker to reach a definitive conclusion,” Glein says. “Instead, we need to assemble a large body of evidence to convince ourselves that only life can explain the data.”

And doing that may be a job for a future mission to Enceladus, depending on how much new knowledge scientists can eventually wring out of the data Cassini left behind. If that ever happens, models like Hao and his colleagues’ could be useful in mission planning.

“Geochemical modeling could provide useful guidance for the selection of equipment and targets in future missions, for example, the search for organic phosphorus species in Enceladus’s plume,” says Hao.

Meanwhile, the habitability checklist doesn’t stop at phosphorus. Life needs a lot of ingredients to pull itself together and then to thrive: liquid water, but also elements like carbon, hydrogen, nitrogen, and sulfur, which, along with phosphorus, form organic compounds. It also needs a group of elements called transition metals; these include elements like copper, iron, manganese, and nickel, and they’re an important ingredient in enzymes, which kickstart the chemical reactions that make life work.

“A next step is to consider other elements that would be needed by life,” say Hao and Glein. “We’re not sure how much other nutrients, including sulfur or transition metals, are present in Enceladus’s ocean. We also have a lot more to learn about which organic compounds are present and how they might have been formed and evolved.”

You need more than water to support life, and a recent model suggests that Saturn’s icy moon Enceladus could have the right stuff. NASA’s late Cassini spacecraft didn’t find evidence of a key ingredient for life in the giant space geysers erupting from Enceladus, an ocean-world moon of Saturn, but planetary scientist Jihua Hao (of…

You need more than water to support life, and a recent model suggests that Saturn’s icy moon Enceladus could have the right stuff. NASA’s late Cassini spacecraft didn’t find evidence of a key ingredient for life in the giant space geysers erupting from Enceladus, an ocean-world moon of Saturn, but planetary scientist Jihua Hao (of…