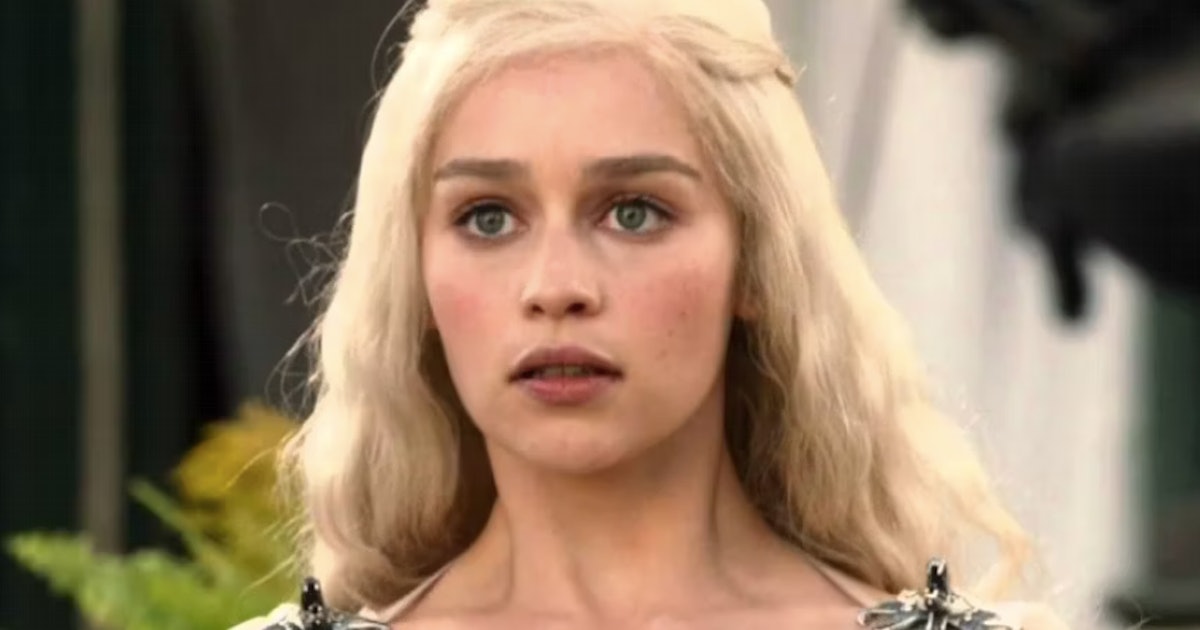 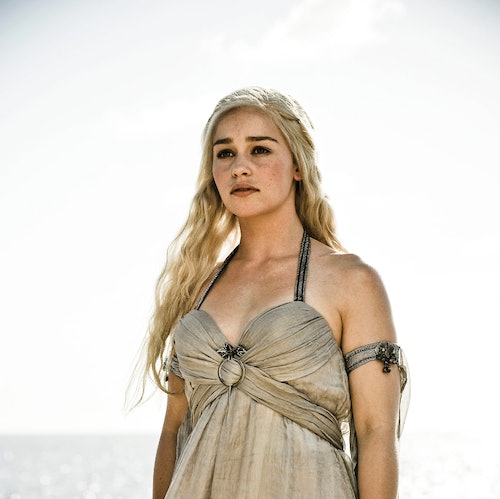 Acts of dutiful intimacy, lust-for-power, and innocent love. Sex plays a major role in House of the Dragon Episode 4, particularly for the show’s two female protagonists, Queen Alicent Hightower (Emily Carey) and Princess Rhaenyra Targaryen (Milly Alcock). If you’re a Game of Thrones fan, you might be worried for these young characters — and the actresses who play them — but House of the Dragon Episode 4, “King of the Narrow Sea,” manages to significantly improve on how sex is depicted in Westeros.

Warning! Spoilers and graphic language ahead.

Game of Thrones notoriously relished in showing women — even those playing teenage female characters — getting brutalized during sex or even raped. This included main characters like Daenerys Targaryen (Emilia Clarke) in Season 1, Cersei Lannister (Lena Headey) in Season 4, and Sansa Stark (Sophie Turner) in Season 5. The series also often depicted its secondary women characters (mostly sex workers) getting maimed — for example, Ros (Esmé Augusta Bianco) in Season 3 — with seemingly no concern for the impact these graphic scenes had on its viewership. The series did slightly better in later seasons, perhaps most notably with a sex scene between Grey Worm (Jacob Anderson) and Missandei (Nathalie Emmanuel), but the damage was already done.

House of the Dragon has set out to do better. After one unfortunate interview before the show’s premiere, writer and executive producer Sara Hess clarified to Vanity Fair that the Game of Thrones prequel would not explicitly depict sexual violence.

So after a notably sex-heavy fourth episode, how is House of the Dragon doing? Let’s break down the context and execution of each of Episode 4’s sex scenes. 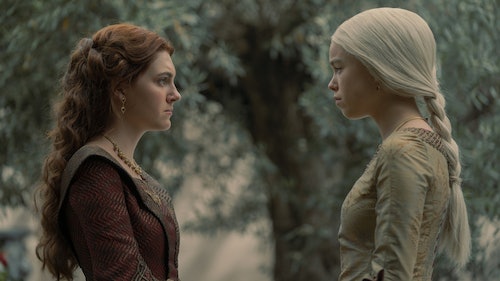 The intercourse between Alicent and King Viserys I Targaryen (Paddy Considine) is not intended to be the stuff of fairy tale romance. The intimate scene highlights their wide age gap, his frailty due to a mysterious dermatological condition, and her obvious unhappiness with this particular matrimonial obligation.

That being said, while Alicent is caught in a relationship that does not fulfill her sexually or emotionally, she is depicted as having some agency. Her father Otto essentially orders Alicent to woo the king for the sake of House Hightower, but Alicent doesn’t seem to mind and clearly sees the benefits of the crown. In exchange for sleeping with an older king, she gets to enjoy the perks of being a queen. It’s complicated, but it doesn’t feel completely coercive. 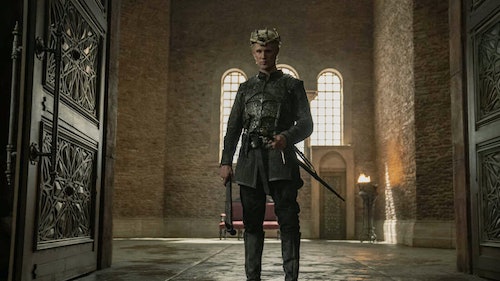 The episode’s second, much more upsetting sex scene is between Rhaenyra and her uncle, Prince Daemon Targaryen. Over the course of the episode, Daemon very explicitly grooms Rhaenyra, leading her away from her home environment into the city beyond the Red Keep. Daemon gets his niece drunk and high, takes her to watch a street show that roasts her claim to the Iron Throne, and then takes her to a brothel for further humiliation.

Amid an orgy, Daemon suggests to Rhaenyra that she needs to be like a king and learn how to have sex before taking control of the Seven Kingdoms. Overwhelmed and under the influence of multiple substances, Rhaenyra acquiesces — given the situation, it would be a stretch to call this consent. Some heavy petting and kissing ensue, and eventually, both begin undressing each other. Daemon is impotent and thus incapable of penetrating Rhaenyra, halting him in his tracks, but the encounter is no doubt traumatizing. The scene is notably intercut with Alicent’s evening with her husband, exposing how the former friends’ coming-of-age stories have diverged exponentially since Alicent married Rhaenyra’s father.

Following the sexual coercion, Rhaenyra walks back to the Red Keep alone and in search of the person she actually wants to be with. We also follow Daemon as the show further clarifies that this encounter was simply his latest villainous attempt to secure power. When Viserys confronts his brother, the king notes angrily that Daemon doesn’t lust for Rhaenyra, he only lusts for proximity to the Iron Throne. So Viserys banishes Daemon from King’s Landing.

If this encounter between Rhaenyra and Daemon were shown in a different, more isolated context, it might feel too similar to Game of Thrones’ irresponsible depiction of sexual violence and coercion against women. Instead, House of the Dragon uses a familiar trope to tell a more complicated story about sex and power. 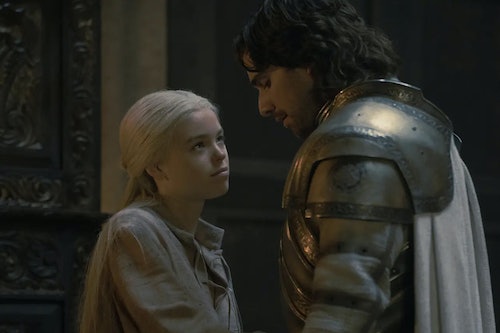 The last sex scene in this episode is shared between Rhaenyra and her crush/personal bodyguard, Ser Criston Cole (Fabien Frankel). This moment between both parties is tender, though not without its complex power dynamics. Because Criston is seduced by Rhaenyra to abandon his vow of celibacy as Lord Commander of the Kingsguard, his role in this initial embrace could be seen as one that he is pressured into (not unlike Jon Snow’s loss of virginity to Ygritte in Season 2 of Game of Thrones).

House of the Dragon and Game of Thrones 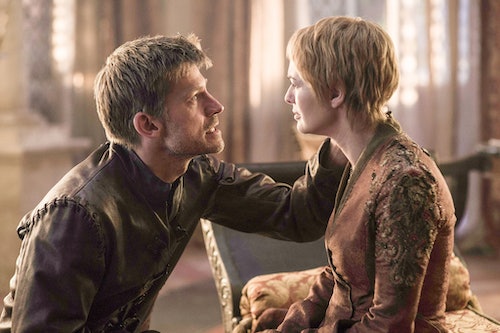 House of the Dragon depicts a variety of sexual situations for its two female protagonists within the complexities of this dark fantasy world. Not every act of sex is “positive,” but Alicent and Rhaenyra retain a certain level of agency in each depiction, and neither character is subjected to graphic sexual violence for cheap audience shock or titillation.

“King of the Narrow Sea” demonstrates different shades of intimacy to make points about consent, and then uses these scenes to juxtapose Alicent’s commitment to the King versus Rhaenyra’s ability to have more choice and freedom over her body within the constraints of both Targaryen and Westerosi norms.

Sex isn’t as “gratuitous” in House of the Dragon as it was in its predecessor, Game of Thrones, which had no problem mangling female prostitutes and raping its main female leads. The explicit torture of girls in Game of Thrones, even if make-believe, brought up real-life ethical debates on the treatment of women in modern media and in real life. It seems that House of the Dragon’s writers and executive producers may have finally gotten the memo.

House of the Dragon airs Sunday at 9 p.m. Eastern on HBO and HBO Max.

Acts of dutiful intimacy, lust-for-power, and innocent love. Sex plays a major role in House of the Dragon Episode 4, particularly for the show’s two female protagonists, Queen Alicent Hightower (Emily Carey) and Princess Rhaenyra Targaryen (Milly Alcock). If you’re a Game of Thrones fan, you might be worried for these young characters — and…

Acts of dutiful intimacy, lust-for-power, and innocent love. Sex plays a major role in House of the Dragon Episode 4, particularly for the show’s two female protagonists, Queen Alicent Hightower (Emily Carey) and Princess Rhaenyra Targaryen (Milly Alcock). If you’re a Game of Thrones fan, you might be worried for these young characters — and…