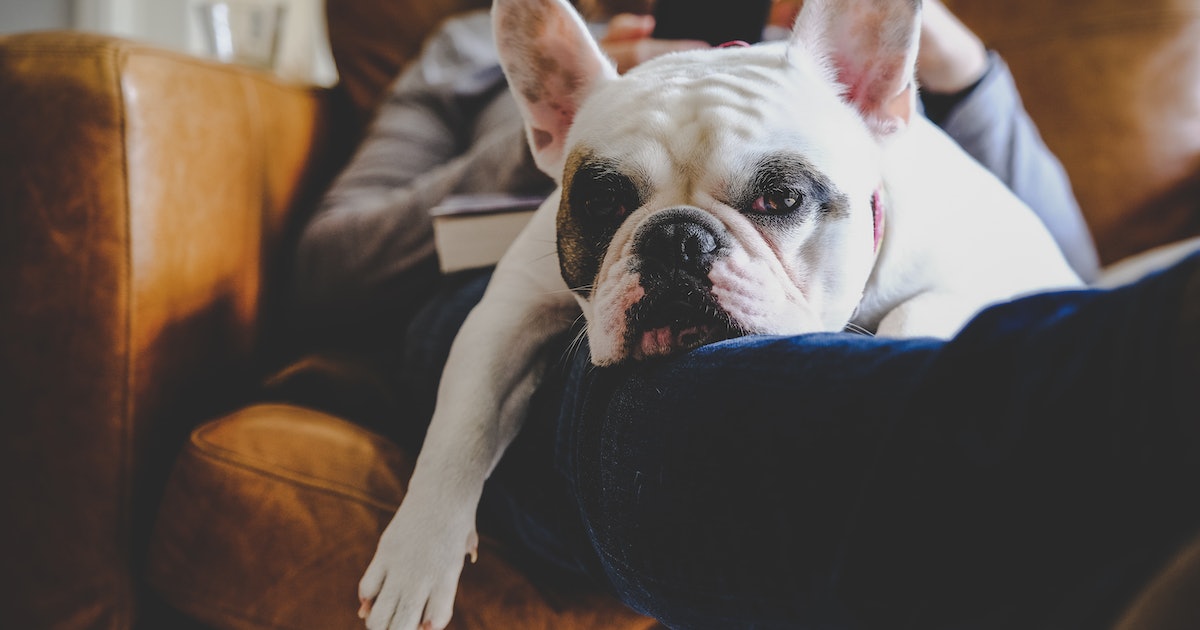 Why is my dog lazy? New research explains the frustrating answer

Are you worried that your beloved Fido isn’t as active as the other pups at the dog park?

There may be a concrete reason for that lack of exercise, according to two new studies published this week in the journals PLOS One and Scientific Reports. Their findings offer implications for both your relationship with your dog and canine health. Let’s get into it.

Your lack of exercise impacts your dog

Body, or, rather, dog owner: Heal thyself. The first study published in PLOS One examines the relationship between an owner’s exercise habits and their perceptions of their dog’s own activities and weight. The researchers sent an online survey to dog owners in the U.K., Germany, France, Canada, and the U.S., receiving more than 3,000 responses. Activities commonly reported included walking, running, hiking, and swimming.

According to the results, owners who did not perform more than 15 minutes of vigorous exercise each week were less likely to report that their dog vigorously exercised, too. These very active individuals also were more likely to consider their dog’s body weight ideal compared to other owners.

“Anecdotally, these results are not surprising, however, this is the first study to provide data to support that those who are more active themselves are more likely to exercise their dogs more,” lead author Sydney Banton tells Inverse. Banton is researching dog diets at the University of Guelph.

Breaking down the findings further, if dogs displayed exercise levels under 30 minutes, then their owners were also less likely to engage in even moderate exercise. The inverse was also true: Dogs whose activity levels were higher — more than a half hour, up to an hour, or exceeding 90 minutes — also had owners who were more likely to exercise moderately.

Compared to participants from other countries, respondents from Germany were more likely to exercise their dogs for longer periods of time and rate exercise as “extremely important.”

The study sheds light on the close and little-studied connection between human and dog health.

“Understanding how owner behaviors influence the same behaviors in their dogs provides us with further insight into how to improve [the dogs’] overall health,” Banton says.

Because dogs and humans co-habit the same space and canines are reliant on their owners for diet and exercise, inactivity in humans naturally impacts pups as well. Dog owners who reported their dog’s body weight was not ideal were more likely to change their dog’s diet but not their activity levels.

Banton says prior research “suggests both mental and physical benefits to both humans and dogs when they perform exercise together.” Plus, exercising with your pet could be a fun bonding activity.

“The results from this survey suggest that veterinarians should encourage dog owners to include consistent exercise as part of their dog’s daily routine in order to promote an active lifestyle, especially if this can be started when the dog is at a young age,” Banton adds.

A potential link between canine health and inactivity

In the second study published in the journal Scientific Reports, researchers analyzed data from pups enrolled in the Dog Aging Project, which seeks to expand the field of scientific knowledge behind dog aging.

Specifically, the scientists wanted to understand potential factors behind canine cognitive decline (CCD), which the study describes as a “neurodegenerative disease in aging dogs.”

Their analysis found a strong link between age and the prevalence of CCD. With each year of aging, a dog’s risk of getting CCD went up by more than 50 percent.

But what’s perhaps less obvious was the link between dog activity level and CCD. According to the data, dogs who were inactive — according to their owners — had 6.47 times higher odds of developing CCD compared to pups who were very active. The researchers suspected this link might exist, but they wanted to test it out in their study.

“There have been numerous studies describing this association in human cognition, as well as some evidence of this association in canines, so it was something we wanted to explore in our cohort of dogs,” Sarah Yarborough, lead author of the study, tells Inverse. Yarborough is researching infectious diseases at the University of Washington’s Department of Epidemiology.

The paper discusses other studies that have shown the beneficial effects of exercise in warding off Alzheimer’s disease in rodents, possibly owing to a reduction in inflammatory cytokines — small proteins involved in cell signaling — that can damage the brain.

But there are a few caveats. First: The study didn’t provide a definition of what a “very active” dog would look like, so it was left up to the owner’s interpretation. Second: The dogs may have been less active because they already developed cognitive decline, not the other way around.

“Further research needs to be conducted to identify any causal links between CCD and canine activity level,” Yarborough concludes.

So while we can’t exactly say exercise is a prescription for preventing canine cognitive decline, the study’s findings could help veterinarians screen for this concerning disease.

“I think studies like this can help bring more awareness to CCD and how it manifests in canines,” Yarborough says.

The Inverse analysis — Just as health and activity level are closely connected in humans, the same goes for dogs. If you notice your dog isn’t as active as it used to be, consult your veterinarian, since it may be a sign of declining mental and physical health.

But in some cases, the answer might be as simple as hopping off the couch and heading out the door for a walk — and your pup will follow.

Are you worried that your beloved Fido isn’t as active as the other pups at the dog park? There may be a concrete reason for that lack of exercise, according to two new studies published this week in the journals PLOS One and Scientific Reports. Their findings offer implications for both your relationship with your…

Are you worried that your beloved Fido isn’t as active as the other pups at the dog park? There may be a concrete reason for that lack of exercise, according to two new studies published this week in the journals PLOS One and Scientific Reports. Their findings offer implications for both your relationship with your…