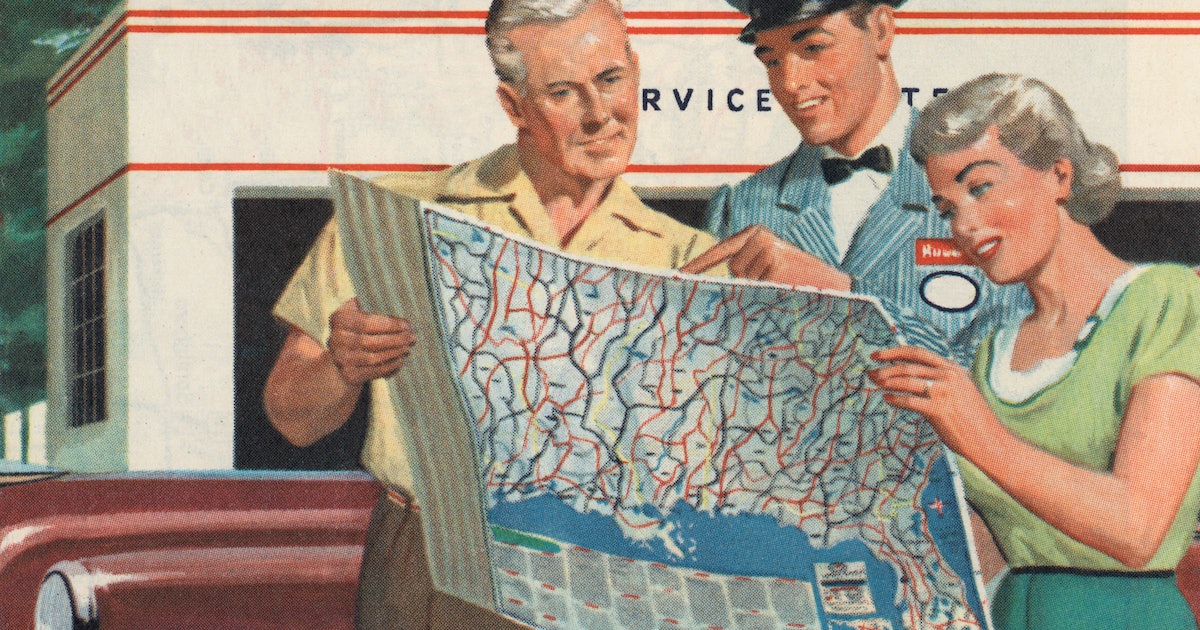 Want to take a road trip in your electric vehicle? Prepare to go off track

Road trips are perhaps only as good as the playlists that accompany them. You know you picked a banger when you’re yelling at the car’s voice directions to shut up and let the music play.

So when you’re out in the country, driving along an open highway with nothing but you, the sky, and Bruce Springsteen hollering through the speakers, it’s so much more irritating to have to silence the tunes and instead start frantically hanging on to Google Maps‘ every word so you can locate the nearest EV charging station. You must then commit to sitting there, flicking flies off your face, while you wait hours for your car to charge back up.

And, not to mention, it’s pretty damn inconvenient to drive an EV for anything longer than a couple of hours. Compared to the more than 145,000 gas stations lining America’s roads, you can only find about 46,000 EV charging stations. These few tend to be concentrated along the coasts and are even sparser in the country’s middle. In other words, if you are in Kansas near the Missouri border and need to charge your Tesla, you could end up on a detour so great you (literally) won’t be in Kansas anymore.

These drawbacks are particularly annoying because today’s EVs have a median driving range of 234 miles on a full charge, according to the EPA, or about the same range as the Jaguar I-Pace 2022 model. The most you can score is up to 520 miles if you’re willing to drop over $170,00 on the Lucid Air 2022 model. Meanwhile, gas-powered cars have a median range of 403 miles.

Add that electricity-powered car trips can involve plenty of waiting around — and we don’t mean sitting in traffic. Charging up an EV can take between 20 minutes to several hours, depending on the charging equipment (which may not be working). A cut-and-dry gas run takes five minutes. In New Jersey, the gas station attendants even pump it for you. If there’s a line for the charging station, then add another 40 minutes of waiting on to your odyssey.

“That’s something that’s clearly a waste of time, so that’s where we can improve in the planning phase,” Matteo Muratori, a senior engineer at the National Renewable Energy Laboratory (NREL) who studies EV infrastructure, tells Inverse.

To see the problem firsthand, let’s hit the road. You, a Tesla driver, are planning to drive from Washington, DC, to Joshua Tree National Park in California. A Tesla Model X requires over nine hours of optimum charging, and the trip would take about 51 hours. Driving the more affordable Tesla Model 3 entails approximately 10 hours of charging time and a 52-hour journey time. Both of these scenarios assume you never have to wait for available chargers at any point. In comparison, a traditional car ride would take about 37 hours. It is possible that you could charge overnight by staying at hotels, but again, not all hotels have an EV outlet as standard.

Things are getting better, though. EVs like those made by start-up Lucid have increasingly longer driving ranges — although they are expensive now, the competition pushes other carmakers in the same direction. And the number of EV stations in the U.S. has grown rapidly over the past few years. In the last quarter of 2021, public EV charging ports increased almost 5 percent over the previous quarter.

Still, these hold-ups help explain why EV owners drive about half of the annual miles that gas-powered car owners put away. So if Americans want to keep road-tripping amid our climate crisis, we must seriously streamline extended EV journeys.

Not all electric-vehicle charging stations are equal. They’re divided into three categories:

“I wonder when to say, ‘Ok, this [charging speed] is good enough.’ I think we’re really close.”

For the consumers eager to ditch their gas-powered rides sooner rather than later, it’s important to focus on increasing accessibility to the technology that’s already available rather than just setting our sights on the fastest possible chargers and the cars with the longest feasible ranges. That means we need to reimagine U.S. driving culture, at least for now: Try to map out the stations on your route before hitting the road, and get comfortable spending a bit of time at rest stations as you charge, Muratori of NREL says. Tesla models already do the planning for you.

“I wonder when to say, ‘Ok, this [charging speed] is good enough,’” he says. “I think we’re really close. It doesn’t mean we can’t keep improving, but I don’t think we need to keep improving in order to provide a good experience to consumers.”

Plus, the high-tech changing stations and fancy cars with relatively long mile ranges currently in development will likely be unaffordable for most consumers. But today’s adequate technologies can still offer an efficient and environmentally friendly experience for broader swaths of the population, says Eric Wood, a senior engineer at NREL.

“There is a tradeoff with the convenience of that [quicker] charge and the cost of that technology,” Wood explains.

“We’re trying to find that sweet spot where we’re providing people with enough speed to meet their needs, but not doing so in a way that’s not sustainable financially.”

But what will it take to trick out these rides? The key may be new-and-improved batteries that scientists and automakers can only dream of. Today’s EV batteries can withstand up to around 150 kW, or approximately 7.5 miles of battery range per minute in a single charging session before they overheat and degrade. Because batteries aren’t able to keep up, even the fastest publicly available charger, which provides 350 kW or around 23 miles of battery range per minute, isn’t super useful.

Researchers are now looking into a range of solutions for this problem. For example, just as concepts from quantum physics have infiltrated everything from computers to lighting, we may encounter quantum batteries in the (distant) future. Dominik Šafránek, a physicist at South Korea’s Institute for Basic Science, envisions batteries that are powered by quantum states.

The race to charge vehicles at speeds comparable to gas fill-ups could strain our aging infrastructure, threatening the transition to renewable energy.

Quantum entanglement, for instance, occurs when two or more particles — commonly called qubits — link up and remain connected no matter how far apart they travel (just like a devoted long-distance relationship). Thanks to this property, quantum batteries could send power to these qubits and charge multiple cells simultaneously, unlike traditional batteries that can only power up cells independently.

“It’s using these non-classical states to your advantage,” Šafránek tells Inverse. “The voltage determines the speed at which [traditional] batteries are charged, but with quantum charging, you can take a shortcut from the uncharged state to the charged state.”

Quantum batteries could achieve high speeds without the constraints faced by the materials in today’s lithium-iron ones, such as the specific temperature range that must be maintained to avoid damage. It’ll also give you more bang for your buck since the charging speed is proportional to the number of qubits (so a battery with six qubits would take only ten minutes to charge, assuming that one qubit requires an hour to charge).

This isn’t likely to happen any time soon, though. Šafránek says we’ll probably have to wait until quantum computers advance further, since these technologies are closely related — but that could take multiple decades.

Another innovation that could take several decades: Wireless charging solutions could eliminate the need to stop at all by adding juice as you drive. Scientists believe wireless EV charging could be possible by inductive charging, which uses an electromagnetic field to transfer power to the car battery, somewhat like how wind or water push turbines to generate electricity. In the car, an induction coil would get an electromagnetic “push” from the charger, converting the vibrations into energy.

Solid-state batteries, meanwhile, could be ready a whole lot sooner. In most batteries, lithium ions flow through a liquid electrolyte. The solid-state batteries currently in development include a solid electrolyte often made from ceramic material. These may provide a safer, faster-charging option — they are less likely to catch fire and may only need 10 to 20 minutes to get the job done. That’s because they can hold far more energy than current lithium-ion batteries. Solid-state batteries will likely hit the market in a few years, according to ambitious company estimates. But the invention seems to be bogged down by engineering problems, so the proposed timeline may not be realistic.

In addition to the drawbacks of today’s batteries, we can only put so much stress on the power grid. The race to charge vehicles at speeds comparable to gas fill-ups could strain our aging infrastructure, threatening the transition to renewable energy. Fortunately, researchers are looking into ways to speed up charging without maxing out local electricity infrastructure.

And in the coming years, potential EV adopters can expect plenty more charging options: The federal government announced this February that it would provide $5 billion over five years to beef up the country’s public charging infrastructure. Each state will receive millions of dollars over that time period, which will largely go toward stations focused along the Interstate Highway System (good news for road trippers).

Given current limitations, this money likely won’t go toward building quantum chargers but rather the range of currently available, tried-and-true technologies. So if you’re looking to get electric while not breaking the bank, the future’s looking bright.

Road trips are perhaps only as good as the playlists that accompany them. You know you picked a banger when you’re yelling at the car’s voice directions to shut up and let the music play. So when you’re out in the country, driving along an open highway with nothing but you, the sky, and Bruce…

Road trips are perhaps only as good as the playlists that accompany them. You know you picked a banger when you’re yelling at the car’s voice directions to shut up and let the music play. So when you’re out in the country, driving along an open highway with nothing but you, the sky, and Bruce…