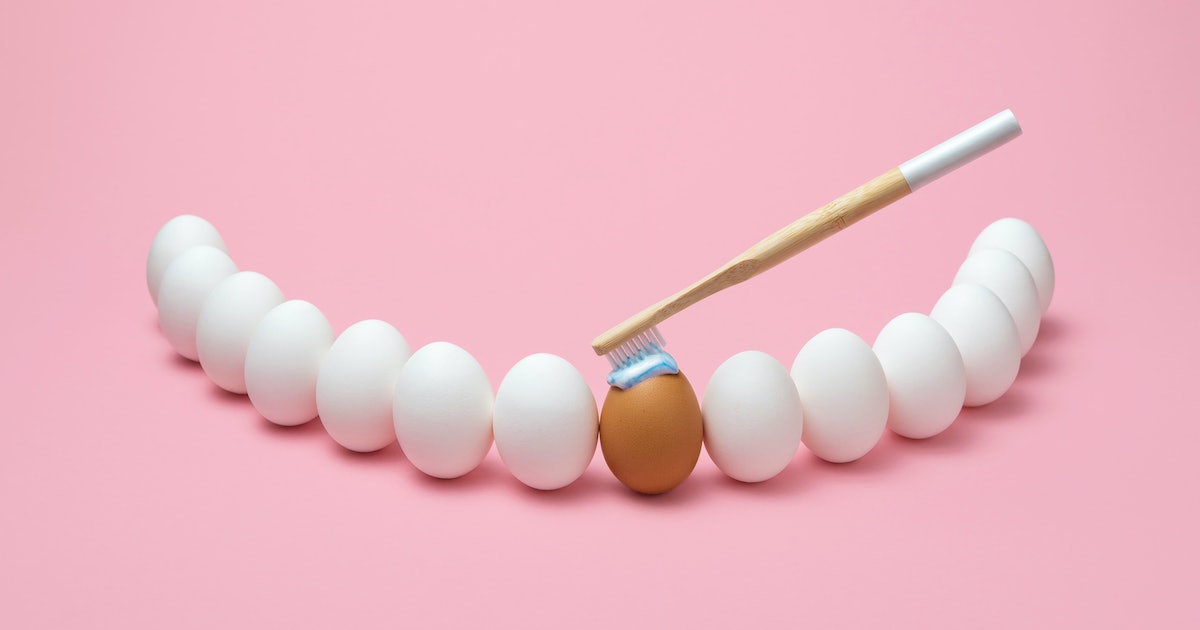 No one wants cavities. There’s the searing pain of a toothache, the inability to eat your favorite foods, and, worst of all, the unavoidable trip to the dentist. Imagine if there was a way to nix cavity-forming bacteria in the bud while whitening your less than ivory ivories? That, dear reader, may soon be the future of dentistry.

A group of Chinese researchers has developed a two-in-one hydrogel product that both kills bacteria and whitens your teeth, according to a recent study published in the journal ACS Applied Materials & Interfaces. When applied to teeth and blasted with some green light, the novel hydrogel killed nearly 94 percent of oral bacteria used in the experiment while also freshening up stained teeth. The hydrogen gel is still a work in progress, but it may one day replace your Crest Whitening Strips’ coveted place in your medicine cabinet.

Here’s the background — Coffee, tea, and wine drinkers may be all too familiar with stained teeth. These drinks contain tannins — complex chemicals widely found in many types of fruits, berries, and other foods like chocolate — which are not only acidic (so they soften your tooth enamel) but also cling to the plaque on teeth and can build up over time.

On top of this, the wearing away of your pearly whites encourages the growth of bad, harmful bacteria, pushing the balance of your oral microbiome to the dark side. Bad bacteria eat up any sugar leftover in the mouth, upping the acidity and further demineralizing the hard tissues of the teeth (enamel on the outside and the softer dentine right below).

When this protective layer erodes away, this leaves the teeth exposed to infiltration by these bad bacteria. They burrow through to the nerve and blood vessels, which causes irritation and swelling. This, in turn, causes pain because the swelling is trapped inside the tooth with nowhere to go. If left untreated, a cavity can have far-reaching and sometimes fatal, albeit rare consequences like an infection under the gums that spreads to other parts of the body.

What’s new — Currently, there’s no way to whiten your teeth and also prevent cavities. In fact, whitening products can often damage our teeth. This is because the combination of blue light and hydrogen peroxide gel used in conventional whitening treatments creates chemicals called reactive oxygen species, which attack and destroy enamel. (High-intensity blue light also runs the risk of damaging nearby skin and eye tissue.)

To sidestep this, the researchers of the new study concocted a mixture containing sodium alginate (a natural compound from brown algae), bismuth oxychloride (a mineral compound commonly used by makeup companies to add a pearly shimmer to cosmetics), and copper nanoparticles (studies have found copper packs an antimicrobial wallop).

The hydrogel comes together when a solution of calcium chloride is sprayed on top after the mixture is smeared on a tooth. Light activates the chemical components, which still make those reactive oxygen species needed for whitening. But instead of blue light, the researchers turn to green light as a safer alternative.

In single teeth kept in Petri dishes (a bit of a freaky sight, trust me) and stained with coffee, tea, blueberry juice, or soy sauce, the treatment of hydrogel and green light brightened the chompers over time without causing harm to the enamel compared to the conventional whitening treatment.

In another experiment, the researchers showed that the novel treatment effectively killed about 94 percent of bacteria contained in biofilms (the collection of microscopic organisms living on your teeth) the team prepared using Staphylococcus aureus, E. coli, and of course Streptococcus mutans, the main strain of bacteria that causes cavities to form.

This sounds all great and good, but would it still work in a living and breathing person? While the researchers have not tested their method in people yet, they have tried it out in mice (the little rodents develop tooth decay much the same as us). The researchers put cavity-forming bacteria in the mice’s mouths, let those bacteria grow, and then hit them with the green-light activated hydrogel. The treatment appeared to work really well: It cleared out plaque and seemed to effectively prevent moderate and deep cavities, all the while whitening murine molars.

Why this matters — According to the World Health Organization, cavities and tooth decay are the most common noncommunicable disease worldwide. In the U.S., more than one in four adults have untreated tooth decay, a statistic that jumps higher for individuals coming from low-income households, lack a high school education, are non-Hispanic, Black, and current smokers.

Even if you’re among the lucky ones with dental insurance, fixing your teeth doesn’t come cheap. There’s the cost of x-rays, filings (which can vary depending on the type of filing used), and surgery, which can all rack up to thousands of dollars, if not more. Professional teeth whitening is also expensive, averaging about $1,200, according to Glamour. It’s also generally not covered by dental insurance since it’s considered a cosmetic procedure.

So taking care of your cavities and whitening your teeth? A double whammy of crazy expenses but one the researchers hope to cut down to only one with their invention.

What’s next — The hydrogel is still a work in progress, the researchers write in their paper.

“The viscosity of [the sodium alginate, bismuth oxychloride, and copper nanoparticles mixture] can be further improved, and the long-term stability of [the mixture] needs further experimental exploration as well.”

But they are hopeful that with additional improvements, a tube of their goo and some green light polishing up those whites while fighting cavity-fomenting bad bacteria will be “a promising strategy for oral health care in the future.”

No one wants cavities. There’s the searing pain of a toothache, the inability to eat your favorite foods, and, worst of all, the unavoidable trip to the dentist. Imagine if there was a way to nix cavity-forming bacteria in the bud while whitening your less than ivory ivories? That, dear reader, may soon be the…

No one wants cavities. There’s the searing pain of a toothache, the inability to eat your favorite foods, and, worst of all, the unavoidable trip to the dentist. Imagine if there was a way to nix cavity-forming bacteria in the bud while whitening your less than ivory ivories? That, dear reader, may soon be the…

Wastewater can track viruses like Covid-19 — can it do the same for superbugs?

Want to take a road trip in your electric vehicle? Prepare to go off track