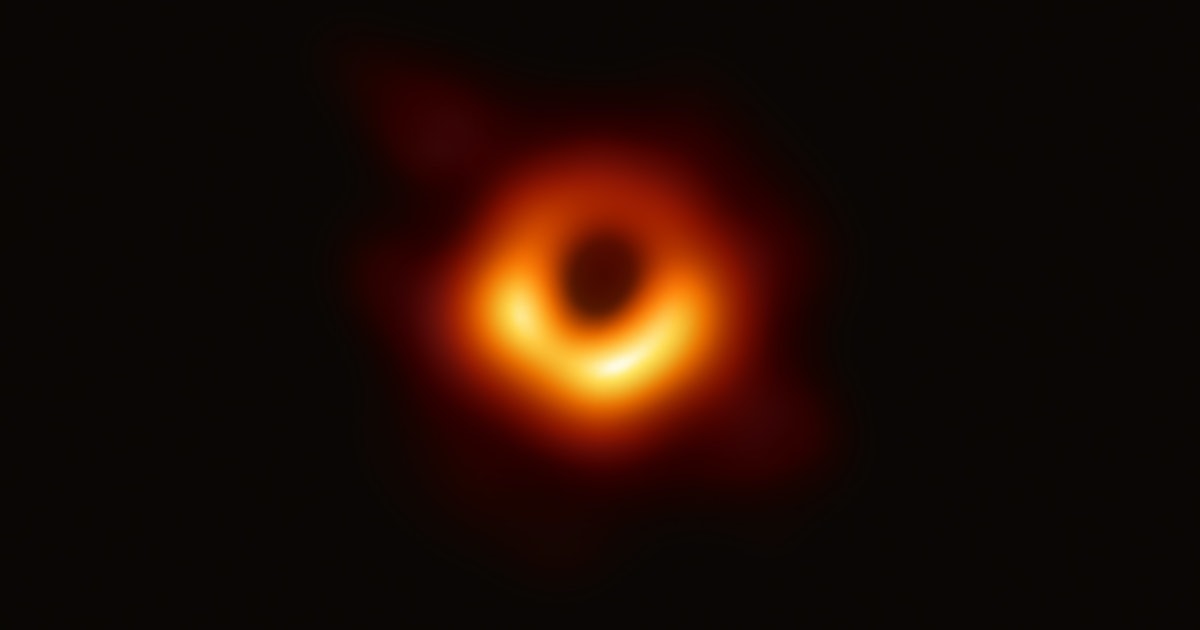 In 2019, the Event Horizon Telescope gave us the first-ever image of a singularity, peering at light emitted just outside the boundary of the supermassive black hole M87. Now, by sifting through the data from that image, researchers have picked out an even more elusive feature hidden inside the vortex of light, giving us our first glimpse of a phenomenon unique to black holes that scientists call a “photon ring.”

Photons are the particles that light is made of. A black hole like M87, which is vacuuming up gas and dust from the galaxy around it, actually emits a huge amount of light as infalling matter is heated to extreme temperatures and whipped around the event horizon by crushing gravitational and magnetic forces. Those photons allow astronomers to actually see the event horizon of the black hole, using a network of radio telescopes spread out across the surface of the Earth.

Here’s the background — When something like our Sun emits photons, they shoot out in pretty much a straight line. But the gravity of a black hole is so intense that it can actually cause some photons to turn around, like a stunt driver executing a screeching U-turn. Those particles of light can end up coming out on the other side of a black hole, creating what looks like a thin ring of light. That’s what the astronomers were looking for.

The original M87 image that the EHT released in 2019 looks something like a fiery donut, albeit one that’s been smudged a bit. That more messy image was mostly made up of light from what astronomers call the “primary image,” or photons that shot straight out of the black hole’s event horizon. The photon ring, made of light that originated on the other side of M87, was hidden inside that primary image. The team of scientists details their findings in a new paper in The Astrophysical Journal this month.

How they did it — Teasing out the photon ring from the rest of the light from M87 took some clever algorithmic filtering, Avery Broderick, an astrophysicist with Canada’s University of Waterloo and the Perimeter Institute for Theoretical Physics, and a paper coauthor, tells Inverse via email.

“The Event Horizon Telescope is as much a computational instrument as a physical, as dependent on the algorithms that form its ‘eye piece’ as the steel in its radio dishes,” he says. “What is different here is the algorithm used to process the data and generate the associated images.”

The researchers essentially had to turn off some of the data from the original image, he says. It’s something like using polarized sunglasses to block the glare from the Sun.

The result looks like a thin, bright ring, which fits nearly exactly with what astronomers had predicted. It’s another strong confirmation of Einstein’s theory of general relativity, which deals with how things behave near massive gravitational fields, as well as a chance to study photons that have come closer than almost anything else to a black hole.

As the photons that make up the ring were bent back around the black hole, they skimmed right by the event horizon, the point past which even light cannot escape. That makes these photons rare scouts of a region that’s been almost impossible to study.

One takeaway from the photon ring is that M87 is even more massive than was previously thought.

“There is a strong relationship between the diameter of the photon ring and the black hole mass,” Broderick says. By looking at the size of the ring, the team estimates that M87 is around 7.13 billion times as massive as the Sun, beating previous estimates that pegged it at the mass of 6.5 billion Suns.

The new image also gave astronomers insights into the massive jets that emanate from M87, the result of powerful gravitational forces that spin gas and dust from near the black hole into a beam of matter that stretches for thousands of light years into space.

With the newly processed data, Broderick says they were able to trace the faint footprint of the jet almost to the event horizon itself. That let them see not only the place it was coming from, but also the tornado-like spin of the jet itself.

The trove of data from the EHT’s observation campaign of M87, which amounted to about 5,000 terabytes, has given astronomers years of information to work with. In 2021, astronomers with the telescope consortium announced new images showing polarized light from the supermassive black hole, which let them better understand its magnetic field. The EHT has continued to observe M87, as well as our own supermassive black hole, Sagittarius A*, with tons of new data still to come. What else will we discover inside these mysterious objects?

In 2019, the Event Horizon Telescope gave us the first-ever image of a singularity, peering at light emitted just outside the boundary of the supermassive black hole M87. Now, by sifting through the data from that image, researchers have picked out an even more elusive feature hidden inside the vortex of light, giving us our…

In 2019, the Event Horizon Telescope gave us the first-ever image of a singularity, peering at light emitted just outside the boundary of the supermassive black hole M87. Now, by sifting through the data from that image, researchers have picked out an even more elusive feature hidden inside the vortex of light, giving us our…

Look! Webb Telescope snaps a startling picture of one of our nearest galactic neighbors