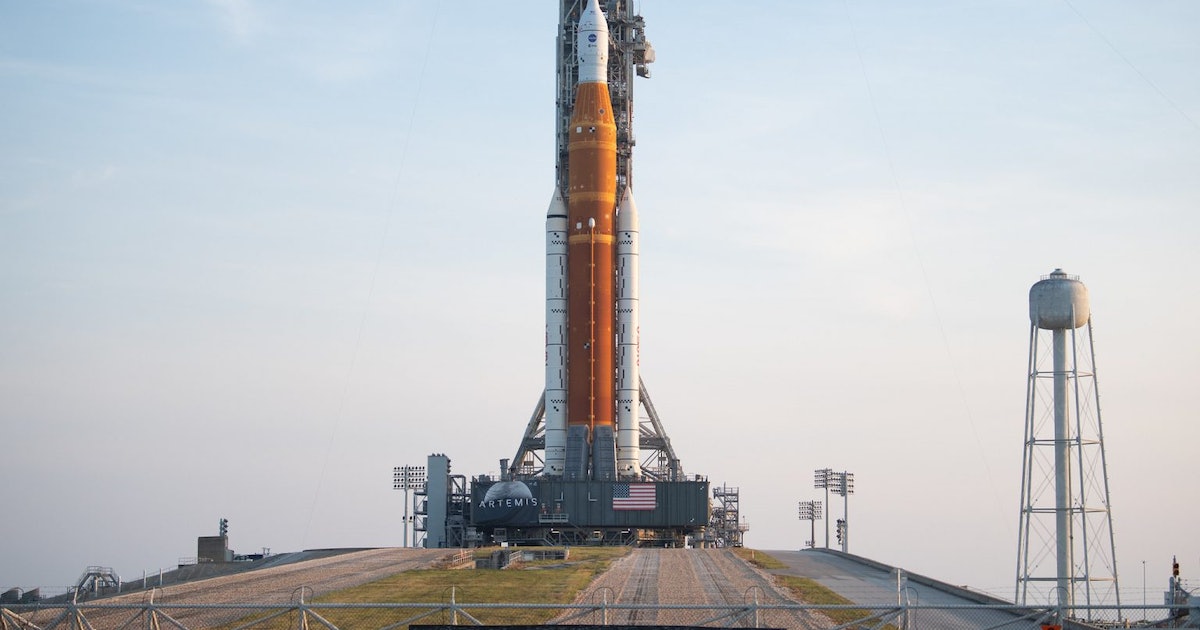 Behold! NASA’s Artemis I is on the launch pad, ready for the Moon

The Artemis I rocket is officially on the launch pad as of early Wednesday, August 17. If all goes well over the next 12 days, it will finally blast off on its journey to the Moon on August 29. New images, released by NASA on Tuesday and Wednesday, show the rocket’s last trek to the launch pad before it lifts off in all its jaw-dropping glory.

This first unmanned stage of NASA’s multi-step Artemis program will likely launch from the Kennedy Space Center in Florida on Monday, August 29. The mission, Artemis I, is designed to test the rocket’s safety and performance before NASA uses the same kit to send astronauts back to the Moon later this decade.

What’s new — The Space Launch System rocket and Orion spacecraft began their red-eye journey to the pad on Tuesday, August 16 at around 10:00 p.m. Eastern. The SLS and Orion made it in one piece to Launch Complex 39B at about 7:30 a.m. Eastern on Wednesday, August 17.

To make the trip, the rocket balanced atop a giant, tank-like “crawler” and zoomed out its home in the massive Vehicle Assembly Building at a blistering top speed of 0.82 miles per hour.

Nine and half hours later, the giant rocket — taller than the Statue of Liberty — arrived at Launch Complex 39B, where it will undergo a final battery of telemetry checks and engineering tests before it takes off. On the pad, the rocket is positioned in front of a giant banner that reads “WE ARE GOING.”

Historically, Launch Complex B has been used to launch missions to the Moon, including Apollo 10, which involved an orbital flight around the Moon.

When will Artemis I launch?

If all goes well in the next 12 days, the countdown to liftoff will begin on Monday, August 29, as early as 8:33 a.m. Eastern. NASA’s engineers will have a two-hour window for launch that morning, so it is possible the rocket could be on the pad as late as 10:30 a.m. Eastern that day before take off.

If the weather doesn’t behave or there is a chance of another craft colliding with the rocket, then liftoff may be pushed back to Friday, September 2. The four-day delay is necessary because the rocket relies on solar power once in orbit, and it would find itself in the Earth’s shadow if it launched in the intervening time.

And if September 2 doesn’t work out, they’ll try for September 5 — but hopefully, it won’t come to that. After all, they are “GOING.”

Artemis I has already suffered a series of delays before getting to this stage. This spring, it made the ten-hour trek to the launch pad for multiple liftoff rehearsals, which were interrupted by liquid hydrogen leaks. Engineers tried the wet dress rehearsal again in June, which was more successful, but a fuel leak scuppered progress. Back to the Vehicle Assembly Building it went. Finally, however, it is free.

The Artemis I mission

Now, back on the launchpad once again, engineers are ensuring everything is in working order for Artemis’ inaugural flight. The Orion spacecraft will orbit the Moon for six days while engineers study its performance for future manned trips before splashing down on Earth.

The Artemis program will rely on the Space Launch System or SLS, and it’s the world’s most powerful rocket, according to NASA. It can blast 59,500 pounds of cargo out of Earth’s atmosphere — about as heavy as your average fire truck and enough firepower to blast off with the Orion spacecraft.

All aboard — For the upcoming Artemis I mission, the Orion capsule won’t be entirely empty. A mannequin named Commander Moonikin Campos will ride in the pilot’s seat with sensors that measure the forces and radiation experienced in the cockpit. The Commander gets his name from Arturo Campos, a NASA electrical engineer that helped bring Apollo 13 home safely.

Artemis I is just the beginning, however.

Artemis II, which is supposed to launch in 2024, will carry four astronauts to orbit the Moon. This will be the first manned flight outside of Earth’s orbit since Apollo 17 landed on the Moon in 1972 if it happens.

NASA plans for humanity to return to the Moon’s surface with Artemis III around 2025.

The Artemis I rocket is officially on the launch pad as of early Wednesday, August 17. If all goes well over the next 12 days, it will finally blast off on its journey to the Moon on August 29. New images, released by NASA on Tuesday and Wednesday, show the rocket’s last trek to the…

The Artemis I rocket is officially on the launch pad as of early Wednesday, August 17. If all goes well over the next 12 days, it will finally blast off on its journey to the Moon on August 29. New images, released by NASA on Tuesday and Wednesday, show the rocket’s last trek to the…

Can we terraform Mars? Scientists may have made a major breakthrough