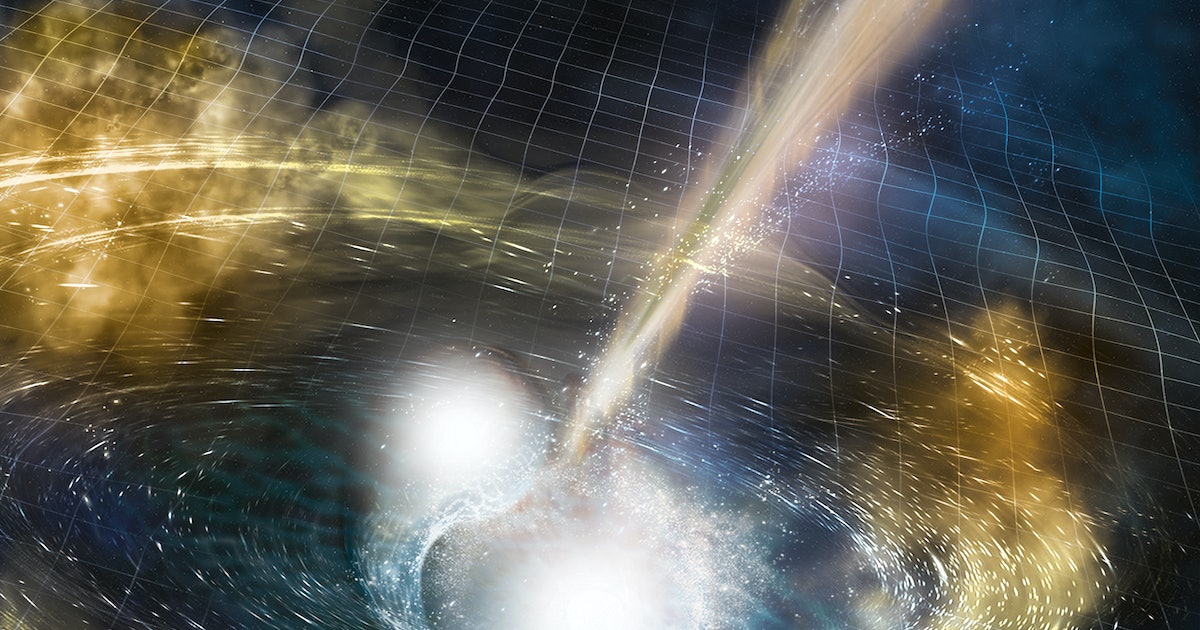 5 years ago, scientists observed a new kind of cosmic explosion

On August 17, 2017, scientists made a discovery that rocked the world of physics: they directly observed two neutron stars slamming into each other.

Formed in the collapse of a massive star, when these incredibly dense and small stellar cores can come so close to each other that they begin a terrible orbital dance to the death, when two become one. That cataclysm is great it literally ripples the fabric of the universe, sending out electromagnetic energy and gravitational waves in the form of a kilonova. It was the first time anyone had seen the phenomenon, first predicted in Einstein’s theory of general relativity, which was conceived between 1907 and 1915.

When a massive star dies, it produces a giant supernova. After the explosion, the remnants of the supernova condense into a ball of neutrons about the size of a city here on Earth, held together by the force of gravity, explains Yvette Cendes, an astronomy postdoctoral fellow at Harvard Smithsonian Center for Astrophysics. A kilonova forms from two of these so-called neutron stars — it’s name a hint at the sheer magnitude of its luminescence. These explosions are 1000 times brighter than a nova, and one-tenth to one-hundredth as bright as a supernova.

Gravitational waves and a kilonova

Einstein’s theory of general relativity envisions spacetime almost as a liquid-like substance. When extremely large masses accelerate in this fluidlike medium, it might generate waves that travel like ripples at the speed of light, temporarily bending and reshaping spacetime. Relativity predicts that two massive objects orbiting each other could produce these types of waves, giving away their existence. The gravitational waves would draw energy away from the orbiting pair, forcing them to merge.

Einstein thought gravitational waves would never be detected. But in 1974, scientists found indirect evidence that these waves existed. And in 1993, the Noble Prize in Physics was awarded to Russell Hulse and Joseph Taylor for that discovery. In 2017, the Nobel Prize in physics was awarded to the three physicists, Rainer Weiss, Barry Barish, and Kip Thorne, who used the Laser Inferometer Gravitational-Wave Observatory to directly detect the first gravitational waves from a black hole merger in September, 2015 — proving Einstein’s predictions half right: Gravitational waves exist, but they can also be seen. But LIGO’s work did not end there.

Using LIGO, Fermi, and the INTEGRAL satellite, scientists identified the general source area of the neutron star merger. Using a different telescope, they then honed in on a galaxy called NGC-4993. NGC-4993 is in the constellation Hydra, and while astronomer Cendes says it is relatively close to Earth in the framework of the universe, it is 140 million light-years away.

Over the two weeks following the initial detection of the merger, scientists from around the world started to unpack the data. The measurements revealed the states of the neutron stars leading up to the merger and during the explosion.

Where did the universe get its heavy metals?

By studying the electromagnetic emissions, the scientists discovered that a vast majority of heavy metals distributed around the universe come from neutron star mergers.

Cendes says the light spectrum from the crash was very, very high in the heavy metals. Before this discovery, astronomers thought all the heavy metals in the universe were created by supvernovae, she says.

“If you think of the gold in my wedding ring, maybe a very, very, tiny fraction, one or 2 percent was from a supernova, but the majority of this was created a neutron star merger,” says Cendes.

“In an astrochemistry sense, it was a huge revolutionary shift about the heaviest elements and where they come from in the universe, which is, of course, an important question.”

Cendes uses another analogy: If a galaxy were a chocolate chip cookie, then you can use the distribution of sugar and chips to represent where heavy metals originate in the universe.

Undoubtedly, there’s still a lot to learn from this neutron star merger, GW170817, and future discoveries await, too. For example, scientists have never observed a black hole colliding with a neutron star — but they could! Meanwhile, everyone can look at their gold jewelry in a slightly new light.

On August 17, 2017, scientists made a discovery that rocked the world of physics: they directly observed two neutron stars slamming into each other. Formed in the collapse of a massive star, when these incredibly dense and small stellar cores can come so close to each other that they begin a terrible orbital dance to…

On August 17, 2017, scientists made a discovery that rocked the world of physics: they directly observed two neutron stars slamming into each other. Formed in the collapse of a massive star, when these incredibly dense and small stellar cores can come so close to each other that they begin a terrible orbital dance to…

Part 2”s most important, untold story will be on HBO Max