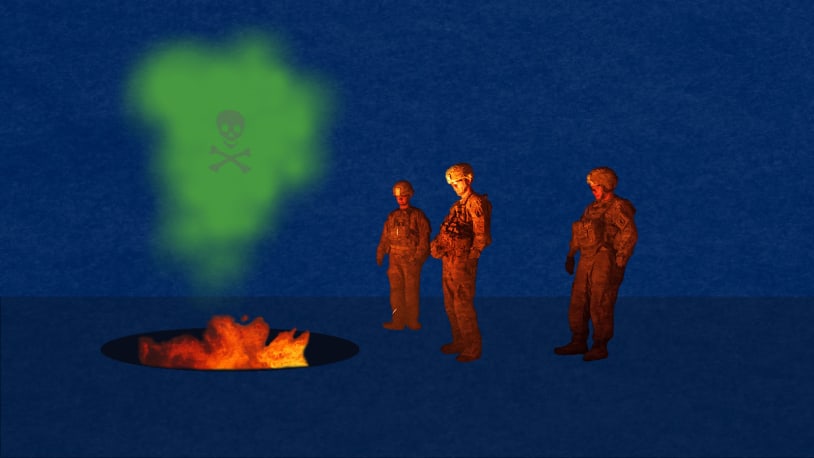 What are burn pits and why were they central to a Senate showdown?

Then Senate voted 86-11 on Tuesday to pass a bill expanding healthcare benefits for veterans exposed to toxic fumes from burning trash pits. Here’s everything you need to know:

What are burn pits?

U.S. troops on bases in Iraq, Afghanistan, and elsewhere routinely burned their garbage, which could include plastics, tires, batteries, jet fuel, and medical waste. A 2020 survey found that some 86 percent of Iraq and Afghanistan veterans said they were exposed to burn pit fumes or other toxins during their deployments.

“It turns out when you invade a country, they don’t tell you when trash day is,” comedian Jon Stewart quipped on his Apple TV+ show The Problem with Jon Stewart. He described the issue as “our generation’s Agent Orange,” referring to a defoliant used during the Vietnam War that produced increased rates of cancer and birth defects in the Americans, Vietnamese, Laotians, and Cambodians exposed to it.

Kelley Vlahos, a senior adviser at the Quincy Institute for Responsible Statecraft, wrote last week that veterans exposed to fumes from these burn pits are “suffering from myriad illnesses … which include everything from irreversible respiratory conditions to cancer.”

The most famous person whose illness could be linked to the pits is probably Beau Biden, the president’s eldest son, who was exposed to toxins from burn pits during deployments in Kosovo and Iraq. He died of brain cancer in 2015 at the age of 46.

President Biden said in 2018 that he was not aware of “any direct scientific evidence” of a link between the burn pits and his son’s cancer. By 2022, he seemed surer, announcing in his State of the Union address that “[o]ne of those soldiers” who was “never the same” after breathing “toxic smoke” from the pits “was my son, Maj. Beau Biden.”

What does the bill do?

Vlahos notes that veterans’ groups “have been fighting for recognition for their maladies … for some 15 years.” The Departments of Defense and Veterans Affairs claimed that there wasn’t enough scientific evidence to tie those illnesses to the burn pits and that, therefore, the suffering veterans were not eligible for health benefits.

The legislation passed by the Senate, which The New York Times described as “the biggest expansion of veterans’ benefits since the Agent Orange Act of 1991,” would allocate some $280 billion over the next 10 years to treat veterans suffering from maladies linked to burn pit exposure. It also requires the VA to presume that certain illnesses are linked to burn pit toxins, making it easier for veterans to access care.

How was the bill passed?

The Honoring our PACT Act — “PACT” stands for “Promise to Address Comprehensive Toxics” — was introduced in the House last summer but got a major boost when Biden named it as a top priority during his State of the Union Address. Biden evoked the suffering of veterans exposed to the burn pits, citing “headaches, numbness, dizziness, a cancer that would put them in a flag-draped coffin,” at which point he was interrupted by Rep. Lauren Boebert (R-Colo.). “You put them in, 13 of them!” Boebert yelled, referring to the 13 U.S. troops killed in a bombing during the Afghanistan withdrawal.

In March, the bill passed the House 256-174, with all Democrats and 34 Republicans voting in favor. Rep. Mariannette Miller-Meeks (R-Iowa), a U.S. Army veteran, described the legislation as “fiscally irresponsible.”

The Senate passed the bill 84-14 in June — all 14 nays and both abstentions were Republicans — “but a do-over was required to make a technical fix,” PBS reported. That do-over was supposed to be a mere formality. Instead, it hit a serious snag. Last week, Sen. Pat Toomey (R-Penn.) joined with 40 other Republicans to block cloture on the bill. Toomey accused Democrats of pulling “the oldest trick in Washington” by inserting $400 billion in unrelated spending and then relying on public sentiment to ram the bill through. Stewart dismissed Toomey’s claim as “bulls–t.”

Soon, though, things were back on track. Senate Majority Leader Chuck Schumer (D-N.Y.) said Sunday that he would hold another vote on the bill and give Toomey a chance to propose an amendment. Toomey’s proposals — “to cap the amount of money that could be put into the fund every year” and to shift the fund “into so-called discretionary spending after a decade” — both failed, the Times reported. Toomey voted against the bill, but he no longer had enough allies to block it. The Honoring our PACT Act passed 86-11. Biden, who has described the bill as part of “our sacred obligation” to veterans, is certain to sign it.

For Republicans, they haven’t been great. CNN’s Chris Cillizza called Boebert’s State of the Union outburst “a new low — even for her.” Rep. Eric Swalwell (D-Calif.) called it a “national disgrace.” Even Republicans weren’t thrilled. Sen. Lindsey Graham (R-S.C.) averted his eyes and muttered to himself. Rep. Ken Buck (R-Colo.) said the State of the Union was “not a time for theater.”

When most House Republicans opposed the bill in March, Speaker Nancy Pelosi (D-Calif.) heaped scorn on them. “Oh really? You just gave tax cuts in 2017 to the richest people in America,” she said. “Tax cuts for the rich. Cancer for our veterans.”

Then came last week’s vote to block the bill in the Senate. Stewart launched into a tirade against the “cruelty” and “hypocrisy” of the GOP “motherf–ckers” who voted to block the bill. Vlahos wrote that Republicans had “really stepped in it” and had “all but ceded pro-veteran issues to the Democrats.” It was, she wrote, “the wrong time” for Senate Republicans “to stiffen their backbones on an issue of fiduciary responsibility.”

Then Senate voted 86-11 on Tuesday to pass a bill expanding healthcare benefits for veterans exposed to toxic fumes from burning trash pits. Here’s everything you need to know: What are burn pits? U.S. troops on bases in Iraq, Afghanistan, and elsewhere routinely burned their garbage, which could include plastics, tires, batteries, jet fuel, and…

Then Senate voted 86-11 on Tuesday to pass a bill expanding healthcare benefits for veterans exposed to toxic fumes from burning trash pits. Here’s everything you need to know: What are burn pits? U.S. troops on bases in Iraq, Afghanistan, and elsewhere routinely burned their garbage, which could include plastics, tires, batteries, jet fuel, and…