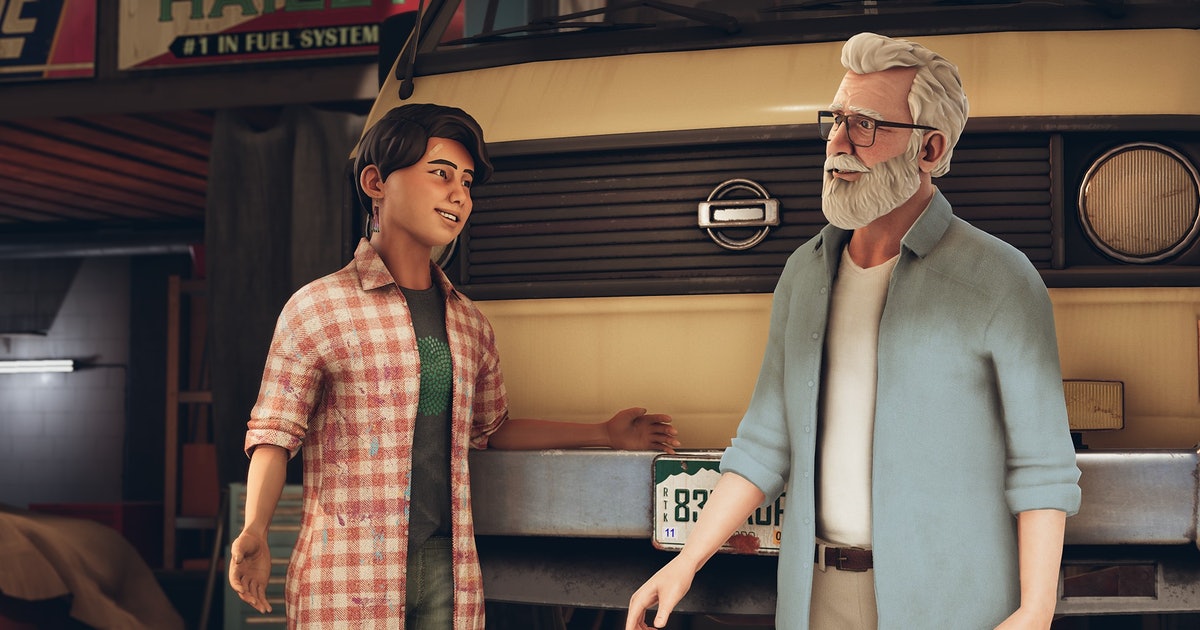 Narrative adventure games have been experiencing a renaissance in recent years, from the wildly popular Life is Strange series to Stray, which took the world by storm with its adorable feline hero. Annapurna Interactive has made a name for itself with narrative-heavy artistic games, and it’s partnered with a developer named Third Shift for another unique narrative experience: Forever Ago is a delightful road trip experience that bucks one of the most common trends in video game history: its protagonist is an elderly man.

Older protagonists are a rarity in video games, even in a genre as broad as narrative adventures. “We explore themes of grief, how to deal with grief, and redemption within the story of this game,” says Third Shift Co-Founder Kai Brueckers tells Inverse. “And we always thought it might be interesting to see how an elderly man as a protagonist for a video game, would tackle those things in life.”

With some exceptions, video games at large — especially big-budget triple-A games — still struggle when it comes to diversity and representation. Many of the biggest games in the last decades feature cis-gendered white male protagonists. (Think Joel from The Last of Us, Kratos from God of Wår, and Peter Parker in Marvel’s Spider-Man, just to name a few). Even games with customizable player-characters struggle with inclusivity. As The Verge astutely points out, 2022’s biggest and most widely praised game, Elden Ring, “fails Black players.”

Forever Ago is a small step in the right direction to help fix this problem within the industry.

“I think having more diverse characters, particularly main characters, is important,” Third Shift’s other co-founder Fabian Denter says. “Not only in age, but also different ethnicities, and backgrounds of the characters. We try to not have your typical 30-year-old white male character at the center of the game.”

Forever Ago’s protagonist, Albert, sets out on a road trip across the West Coast of the United States. Players won’t visit real cities in the game, but the locations are inspired by an actual road trip Brueckers took with his family. Other narrative games like Life Is Strange served as a major inspiration, and Denter notes that Life Is Strange 2, in particular, was a big influence because of its road trip theme.

Along the way, Alfred meets various characters, including a dog that becomes his constant companion. Forever Ago will have multiple smaller stories that play out across the experience, and the developers hope people will be able to connect with the various characters that come into Alfred’s life.

Denter hopes people might see some of their personal experiences with their grandparents represented in the game, and foster a sense of empathy for the older folks in players’ lives. The nostalgic nature of the plot may make even the youngest players reflect upon their mortality in tenderhearted ways.

“Since we are dealing with such serious topics, like grief, or redemption, or memories, maybe the game can help people overcome some of those problems themselves,” Denter tells Inverse.

An especially interesting feature in Forever Ago is the photography system, which goes far beyond simply taking pictures of the beautiful locations you visit. It’s a full-on gameplay mechanic that lets Alfred dive into his own memories in a series of vignettes.

“Alfred has the ability to use this camera as his sort of lens into the past,” Brueckers says. “So Alfred will come across certain places and objects that remind him of something that he’s visited many years ago, and with this camera, he can unlock memories that the player can then re-experience.”

In more ways than one, Forever Ago is a trip down memory lane.

Forever Ago looks like a fascinating narrative adventure with a relatively novel protagonist that explores relatable themes through some unique gameplay mechanics. It’s clear the developers of Third Shift are drawing on their own experiences for the game, and while Forever Ago will deal with plenty of heavy topics, present throughout is a feeling of hopefulness.

It’s the kind of epiphany that Alfred learns in Forever Ago as he ironically drives up and down the peaks and valleys of the Pacific coastline, searching for something he may not be able to identify.

Forever Ago is currently in development for PC and consoles.

Narrative adventure games have been experiencing a renaissance in recent years, from the wildly popular Life is Strange series to Stray, which took the world by storm with its adorable feline hero. Annapurna Interactive has made a name for itself with narrative-heavy artistic games, and it’s partnered with a developer named Third Shift for another…

Narrative adventure games have been experiencing a renaissance in recent years, from the wildly popular Life is Strange series to Stray, which took the world by storm with its adorable feline hero. Annapurna Interactive has made a name for itself with narrative-heavy artistic games, and it’s partnered with a developer named Third Shift for another…