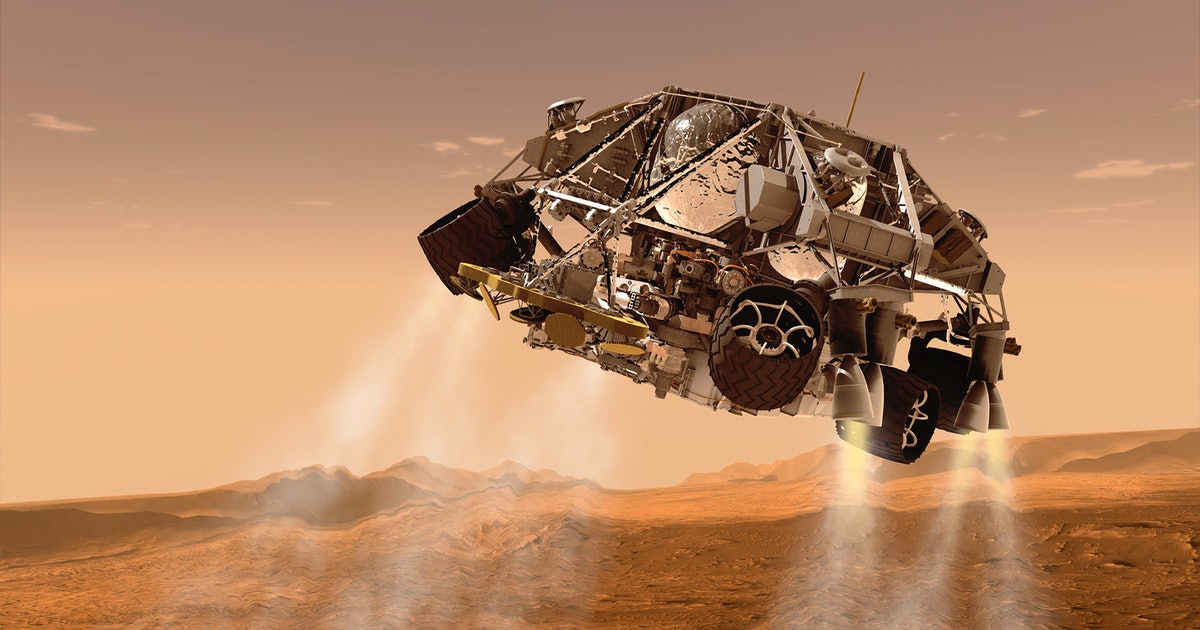 10 years ago, the Curiosity rover arrived on Mars — and revolutionized the hunt for alien life

Ten years ago today, NASA’s rover Curiosity landed on Mars to identify clues that could help to answer the burning question, “Is there life beyond Earth?” This mission has thus far been a raging success, and Curiosity still roams the planet’s surface today, continuing to provide data to scientists, allowing them to reconstruct Mars’ history and unravel the mystery of life on the planet.

Curiosity was launched on November 26, 2011, from Cape Canaveral Air Force Station in Florida. It landed on Mars 10 years ago, on August 5, 2012. Plans for Curiosity started well in advance of its launch and involved hundreds of scientists from around the world.

Once Curiosity entered the Martian atmosphere, it was engineered to move similarly to NASA Space Shuttle astronauts towards the landing site. Several minutes prior to landing on the surface, Curiosity deployed a parachute to decelerate. An advanced system containing mounted retrorockets further decelerated the spacecraft, before Curiosity was descended from the lander by a tether and was placed the rover upright on its wheels.

Curiosity touched down at Bradbury Landing, at the foot of a giant mountain, Aeolis Mons, meaning Sharp Crater, with an elevation of 18,000 feet, making it taller than any mountain in the contiguous United States. Aeolis Mons resides inside Gale Crater, a 96-mile-wide crater that dates back to the early formation of Mars, 3.8-3.5 billion years ago, as a product of a comet or meteor striking the surface of the planet.

Emily Lakdwalla, planetary geologist and author of The Design and Engineering of Curiosity: How the Mars Rover Performs Its Job and (retired) science explainer for the Planetary Society who is also working on a second book, Curiosity: Science Mission, tells Inverse that ever since the Viking orbiter identified geologic formations on Mars that were likely formed by water, exploration on Mars “was united under the mantra, ‘follow the water.’”

Water is understood to be a key ingredient for life on Earth. She further explains that heavy Martian cratering, like we see on the Moon, may contradict the long-term presence of water. Put simply, lots of long-standing craters with no signs of erosion could mean water disappeared long, long ago or wasn’t around for long.

“If you’re interested in the question of life on Mars, then you need to figure out if water was ever really stable for a long time,” said Lakdawalla. “If it was, what kind of environments did it exist in? So, the idea of following water and figuring out the conditions under which liquid water had existed on the surface of Mars in the past was a uniting theme for Mars exploration. That’s what drove a lot of the science of the missions that have happened in the last 25 years or so.”

Gale Crater was chosen after much debate because of a variety of promising indicators that there would be a record of water there.

Why was Curiosity so groundbreaking?

What differentiated Curiosity initially from other Mars missions, explains Lakdawalla, was a desire to do a precision landing. All the past missions, such as Pathfinder, the Vikings, Opportunity and Spirit, had very wide designated landing areas.

“So the next idea was kind of established by NASA headquarters by saying in order to really get to interesting places that we found from orbit that could answer these questions about water, we need to have a more precise landing capability,” she says.

In addition to advanced landing capabilities, Curiosity is a powerhouse of a rover. Powered by a radioisotope system, Curiosity has already outlasted its intended mission time of 23 months, or one Martian year, yet it is still running strong and pumping out new data today.

“It was built with a lot more redundancy [than other rovers] where it has two main computer brains, two motor controllers, two pumps for its cooling fluid, it has to two of the very most important things, but it only has one of each science instruments,” recalls Lakdawalla.

The rover weighs in at 1,980 pounds, which is significantly lighter than a standard car (3,300 pounds). Despite its relatively small weight, NASA likens its dimensions to that of a small SUV (10 feet long by 8.8 feet wide by 7.2 feet tall). It is much larger than other Mars rovers like Spirit and Opportunity. In addition to its body, Curiosity also has an arm that can reach 7.2 feet. That arm is essential for Curiosity’s operations because it can actually collect samples from Mars’ surface.

Curiosity conducts analyses of the rock, soil, and air to determine if the planet was ever suitable to host life. The rover itself acts as a laboratory and is the “largest and most capable rover ever sent to Mars,” according to NASA.

Some of the tools in Curiosity’s lab include a mass spectrometer and an X-ray diffraction and fluorescence instrument that can identify the chemical composition of the soils collected by the arm. The Mars Hands Lens Imager is a camera attached to the rover’s arm that can take pictures so small, they would be able to image a human hair in great detail. It can also take high resolution photos of fine material arms length away from the lens. In fact, snippets of images of the Curiosity itself were amassed into “selfie” portrait.

“There are lots of obvious delta deposits where sediments were deposited into a standing water. That shows you signs of ancient lakes, or clay minerals everywhere. There’s an incredibly thick succession of rocks that got deposited over time,” Lakdawalla says. “The mission is just basically driving monotonically up hill, which means you’re driving from earlier to later. So you’re reading history in order. So that’s actually very handy.”

Fortunately, Curiosity quickly scored after its touchdown on the Martian surface. The conglomerate rock near the rover’s landing site consisted of rounded pebbles and sand that normally formed by flowing water.

After its initial landing, Curiosity was remotely navigated to a region of Gale Crater called Yellowknife Bay. There, it collected its first drilled sample of rock from Mars, called “John Klein,” which gave exactly what researchers were hoping for.

The chemical and geological analyses conducted on John Klein identified the rock as the Sheepbed mudstone that was interpreted to be formed from an ancient lake. Evidence for a large body of still water confirmed that Mars had water that was sustained on the surface over a long period. It contained sulfur, nitrogen, oxygen, phosphorus, and carbon — all necessary requirements for life as we understand it on Earth. The pH levels also indicated that the atmospheric chemistry of that era could support life. This type of rock can sustain the type of microbial life that would consume energy from chemicals within the rocks.

A second sample from Yellowknife Bay provided another major first in space history. While rocks from other worlds, like the Moon, have been dated through laboratory analyses back on Earth, Curiosity provided the first laboratory age of a rock conducted by analysis on another planet.

Ken Farley, a professor of geochemistry at Caltech, proposed using Potassium-Argon dating to date the rock itself. Some rocks contain a radioactive potassium isotope, potassium-40, that decays into argon-40, which remains stable. The isotope decays at a known rate, so the ratio of potassium-40 to argon-40 can provide an approximate age. The results showed that the rock itself formed 3.86 to 4.56 billion years ago.

Curiosity used Surface Age Dating, which counts the number of isotopes from cosmic rays that penetrate the first few meters of a planetary surface to determine how long a surface has been exposed. Curiosity’s analysis revealed the rock sample had only been exposed to the surface 80 million years ago. Cosmic ray isotopes can degrade the quality and quantity of organic samples, but in the scale of geologic time 80 million years is not so long. This is good for the search for evidence of life on Mars.

The discrepancy between the age of the rock and the timing of its recent exposure to the surface is attributed to wind erosion. As Curiosity witnessed in 2018 during a dust storm that covered the entire planet, dust storms on Mars are no joke. Theoretically, this information can help scientists to identify improved locations for collecting rock samples that may have less exposure to wind erosion and thus cosmic rays, which can break down organic matter — an important aid in the search for life.

Although it took years of planning to get Curiosity to Mars, part of Lakdawalla’s interest in Curiosity stemmed from the fact that unlike other missions, she describes the nature of the Curiosity mission as being like a road trip.

“The rover’s mission isn’t planned months ahead of time, it’s planned every day that new data comes down, to decide what to do with the rover the next day,” she explains.

For example, Curiosity spent much longer in Yellowknife Bay than expected. Lakdawalla recalls, “They got stuck there for a year. And so they didn’t start driving to the mountain [Aeolis Mons], until nearly the first anniversary of their landing.”

Since arriving at the base of Aeolis Mons, Curiosity has been moving slowly, sampling fine layers of the geologic record as it ascends in elevation and moves forward in Mars’ history, continuing to find promising evidence of a planet that once may have been suitable for life.

Now, Curiosity is still hard at work and is en route to its next destination to collect more samples at the base of Aeolis Mons. We will have to stay tuned to see what else it has to reveal to us in the future.

If there is one thing Lakdawalla would want people to know about the Curiosity mission as it continues, it is that “they can look at every picture taken by Curiosity. They arrive on Earth and go out to the web as soon as they are available to the science team. It’s become a tradition for Mars missions. Some other NASA missions do it too. It’s great because it means that the public can follow the road trip.”

Ten years ago today, NASA’s rover Curiosity landed on Mars to identify clues that could help to answer the burning question, “Is there life beyond Earth?” This mission has thus far been a raging success, and Curiosity still roams the planet’s surface today, continuing to provide data to scientists, allowing them to reconstruct Mars’ history…

Ten years ago today, NASA’s rover Curiosity landed on Mars to identify clues that could help to answer the burning question, “Is there life beyond Earth?” This mission has thus far been a raging success, and Curiosity still roams the planet’s surface today, continuing to provide data to scientists, allowing them to reconstruct Mars’ history…