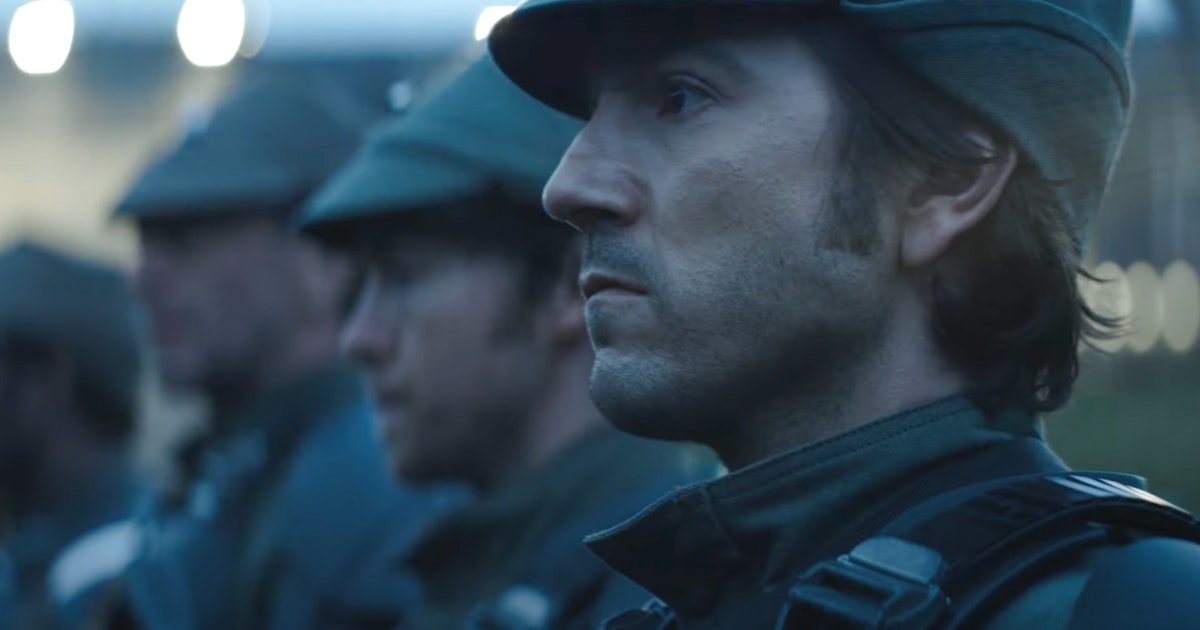 Ever since Luke Skywalker whined about not being able to rebel against the Empire, Star Wars has faced a bizarre narrative problem. How do you depict what the Rebellion looked like for people who aren’t directly related to either Darth Vader or the guy who designed the Death Star? 45 years later, Star Wars: Andor may finally have the answer.

As with previous glimpses of the new Disney+ series — now debuting on September 21 — Andor is striking insofar as it looks like a Star Wars series that doesn’t seem to be having a lot of wars happening in the stars. While this is arguably true of much of The Mandalorian, The Book of Boba Fett, and Obi-Wan Kenobi — three shows which had a lot of planetside action — Andor is different for one simple reason.

Other than familiar imagery of Imperial Star Destroyers and shots of the Senate, we’re not getting characters who scream nostalgia. As much as Mando felt like a departure for Star Wars, ultimately it starred a guy who wore a familiar helmet and a little baby that looked like Yoda. Meanwhile, The Book of Boba Fett and Obi-Wan Kenobi are obviously about legacy characters, which is evident by both their titles and the content of the shows.

Andor is the opposite. We’re mostly dealing either with entirely new characters — like Stellan Skarsgård’s Luthen Rael — or characters who are from very recent continuity — like Cassian Andor. And unlike Rogue One, it appears that Andor isn’t fixated on giving fans the money shots of X-wing fighters (although we do get a looming Imperial ship in the trailer). The short scenes we get of space battles are few and far between, and the ship flown by Rael is new. In other words, even the Star Wars-y space scenes here feel more grounded.

This Andor trailer gives us our first look at how Saw Gerrera (Forest Whitaker) appears in this series, and when Rael says, “Call it what you will,” Saw replies “Let’s call it…war!” It’s a shame he didn’t say “Let’s call it a Star War,” but close enough?

All kidding aside, Saw getting a little on the nose in this scene is a great microcosm of the potential of Andor. Despite the fact that the context of Star Wars is about, well, wars in the stars, a huge majority of stories are about characters who are either brought into those conflicts already in progress or who are trying to sidestep the wars completely.

In other words, even though we’ve had years and years of Star Wars material, other than Rebels, we haven’t gotten a real sense of just how hardcore the Rebel Alliance was prior to A New Hope. And because Rebels was, by nature a kids’ series, it was somewhat limited in just how far it could go in terms of really fleshing out the adult implications of what the Rebels were doing. This isn’t to say Rebels didn’t do a good job at showing us the history of the Alliance. It did! It’s just that there’s a big difference between an animated series for kids called Rebels and a live-action series poised to unpack the nitty-gritty of the Rebel Alliance.

If Andor follows through on this trailer, then the show could finally make the harsh reality of the Empire feel real. Even with Rebels and The Bad Batch, there’s something about the evils of the Empire that feel somewhat abstract by the time we get to A New Hope. Luke has straight-up apathy about fighting the Empire until he’s forced to care. And some of the audience feels the same about the Empire. We’re apathetic about the need for the Rebellion, not because we don’t believe it, but because we haven’t seen the struggle actually lived.

The tagline for the show says “Witness the beginning of Rebellion.” This is actually a great idea because, without this beginning, the entire conflict that drives the classic trilogy can’t exist.

Star Wars has always had the potential to explore the morally dubious area of the freedom fighters of the Alliance. Now, as Saw says, the franchise is putting the “war” back in Star Wars. And that means things might start to get very messy.

Ever since Luke Skywalker whined about not being able to rebel against the Empire, Star Wars has faced a bizarre narrative problem. How do you depict what the Rebellion looked like for people who aren’t directly related to either Darth Vader or the guy who designed the Death Star? 45 years later, Star Wars: Andor…

Ever since Luke Skywalker whined about not being able to rebel against the Empire, Star Wars has faced a bizarre narrative problem. How do you depict what the Rebellion looked like for people who aren’t directly related to either Darth Vader or the guy who designed the Death Star? 45 years later, Star Wars: Andor…

Why is ‘Andor’ delayed? A surprising Marvel leak could reveal the answer