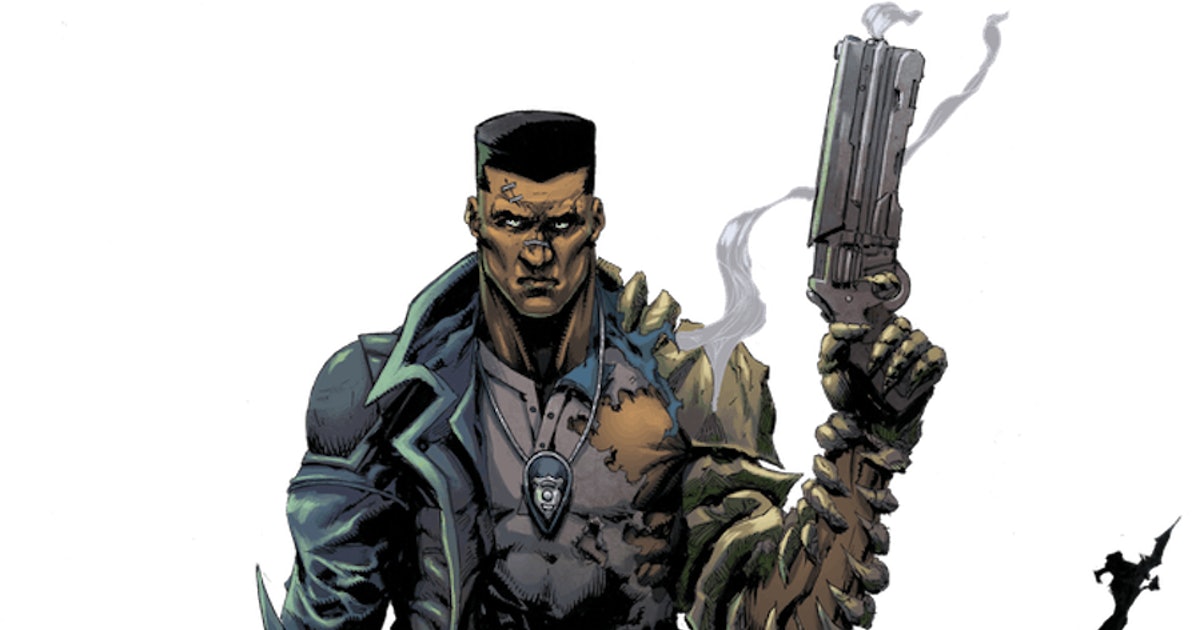 Wesley Snipes dives into a cyberpunk apocalypse in ‘The Exiled’

Wesley Snipes stars as a burnt-out detective on the trail of a vicious serial killer in a post-apocalypse who murders victims with an ancient spine-ripping tool … sort of.

Blade actor Wesley Snipes launched a Kickstarter campaign last month for a graphic novel called The Exiled. Its protagonist Niles “Roach” Washington intentionally bears a striking resemblance to Snipes himself. The hope is to attract interest in other media such as a live-action feature film, a TV anime series, a mobile app, and even a first-person shooter video game. A 48-page prequel titled Exiled: The Forgotten Wars is also in the mix, and they’re interested in everything from spinoffs to prequels.

“One of the early decisions was to give the character a background similar to mine,” Wesley Snipes tells Inverse. “He comes from the Bronx. We’ve got all of that: the movement, the energy, the creativity. The idea is to represent what’s dynamic and interesting with certain movements, martial arts styles, or even weapons.”

The dark sci-fi/noir setting takes place in a gritty cyberpunk apocalypse that feels like a mix between Ridley Scott’s Blade Runner and David Fincher’s Se7en. The oversized 140-page thriller follows Roach as he descends into a nightmarish world to discover the Earth’s most chilling secret.

After rising to the pinnacle of bankable action stars in the ‘90s with hits like Demolition Man and Rising Sun, Wesley Snipes ushered in the dawn of modern superhero sagas starting in 1998 with Blade and its two sequels. With Marvel Studios’ renewed interest in resurrecting the Blade franchise, Snipes is back into the A-list conversation at studio lunches.

So far, The Exiled Kickstarter campaign has already blown past its initial funding goal of $20,000 and is currently sitting at over $129,000. There are numerous stretch goals available like signed editions, collector cards, and a linen print. Pledges will be accepted through July 31.

Snipes developed The Exiled with co-writers Adam Lawson and Keith Arem, whom he first hooked up with during the days of Demolition Man when a video game adaptation was in the works. The team recently welcomed artist Gabriel “Eskivo” Santos and colorist Valentina Bianconi to the project to render the story’s bleak, near-future imagery.

Inverse spoke to Wesley Snipes and Adam Lawson to learn about their creative team-up, what readers can expect from Roach’s story, and so much more about The Exiled’s dark world.

The Exiled seems like an organic fusion of creative minds. What was the genesis of the project?

Adam Lawson: We all ran into each other at a party for Radical Comics at San Diego Comic-Con. Several years later, Keith and Wes were talking about doing a comic book together about this detective pursuing a serial killer, and as he tracks down this character, he uncovers a dark secret that flips the whole world on its head.

Wesley Snipes: Keith is a futurist who appreciates not only the creative but the technical aspects of things and how technology could be augmented and enhanced in the storytelling process. And I appreciate him for that. I’m a technophile in my own little way.

Lawson: On the crowdfunding side of it, we felt like this was a great chance to be true rebels. When you can build your own story and throw it out to the fans, you can craft your own tale. Comics are cool because you can explore huge worlds without necessarily huge budgets in the same way that a Hollywood movie works.

How has your acting experience helped define the character of Roach?

Snipes: Before Hollywood, I went to Purchase College in New York, which was a professional training school for liberal arts for actors or dancers and a temporary way to Julliard and NYU.

One of the things they focused on was the “5 Ws,” which were “Who, What, When, Where, and Why.” Once you answered those five Ws, that would make a foundation for your character and the direction that character would go in. That was acting training for one-man shows and theater, and that’s kind of my base. So I bring that training and those five Ws to all my work, be it film, a documentary, or a graphic novel.

Artists Gabriel “Eskivo” Santos and Valentina Bianconi deliver a gritty style and tone to The Exiled. How does their artwork enhance your story?

Lawson: Color is such a unique part of comics because it tells you the tone, the vibe, and the mood. It’s almost like a film’s music in many ways. I think what we liked about Valentina is that she was less of a traditional American comic book colorist and had more of a Euro vibe to it. Which gave it a general sense of maturity, and she’s also insanely talented and incredibly good at her job.

Getting artists is tough because of scheduling, and it’s a 140-page book which is a huge task to undertake. Gabriel came out of left-field. He’s not a mainstream artist in the sense that he had years in the comic book industry, but he has obvious talent and endless drive. His line art for that first hero cover image really sold us on it.

Snipes: The color allows for a certain kind of energy to emerge from the page. Colors are frequencies, and they vibrate with individuals at different rates. The right color can engage the reader and inspire or stimulate the imagination, which is the basis for what graphic novels and comic books are all about. You fill in the blanks for things that you don’t actually see.

What were some of the rewards and challenges of building out the world of The Exiled?

Lawson: Our thoughts early on were, “How do we have this noir city itself be a character?” It breathes; It has life. Which makes it brutal for the artists because then they have to create detailed backgrounds and other scenes that are time-intensive. It’s set in New York in a rough city and had this reflection of a rugged tough town, not quite in the present day but one step farther into the future. But then Wes brought coolness to it, right? He’s gonna drive a cool car, he’s gonna be in an old El Camino. He’s got to be stylish, too. Wes brings so much style to the character design.

Snipes: You don’t see many African American lead characters in this kind of world. Even in the graphic novel space, you don’t see that type of representation. And of course, I want to bring the cool!

Part of your plans involves expanding your graphic novel into other entertainment arenas. Where else might be a good fit for The Exiled?

Snipes: One thing that excites me is the next generation of technologies for storytelling and interactivity. With this particular project, we have some secret codes in the book that you can follow to find out more details and take you down a rabbit hole.

There are other technologies out there that lend themselves to a very unique experience beyond just reading our graphic novel. And those tools are very attractive to me. What you can do in gaming, in VR, and the Metaverse, if that’s a possibility. Who knows, you may end up with a theme park back in the Bronx based on the whole thing!

Snipes and Lawson be attending San Diego Comic-Con this week with a special panel on Friday, July 22, 2022 at 5:30 p.m. called Wesley Snipes: The Exiled. Joining them at the event will be co-writer Keith Arem and their partners at the Whatnot Publishing booth, where Snipes will be doing signings as Gabriel “Eskivo” Santos sketches original art.

The Exiled is slated for completion early next year with delivery scheduled in June of 2023.

Wesley Snipes stars as a burnt-out detective on the trail of a vicious serial killer in a post-apocalypse who murders victims with an ancient spine-ripping tool … sort of. Blade actor Wesley Snipes launched a Kickstarter campaign last month for a graphic novel called The Exiled. Its protagonist Niles “Roach” Washington intentionally bears a striking…

Wesley Snipes stars as a burnt-out detective on the trail of a vicious serial killer in a post-apocalypse who murders victims with an ancient spine-ripping tool … sort of. Blade actor Wesley Snipes launched a Kickstarter campaign last month for a graphic novel called The Exiled. Its protagonist Niles “Roach” Washington intentionally bears a striking…