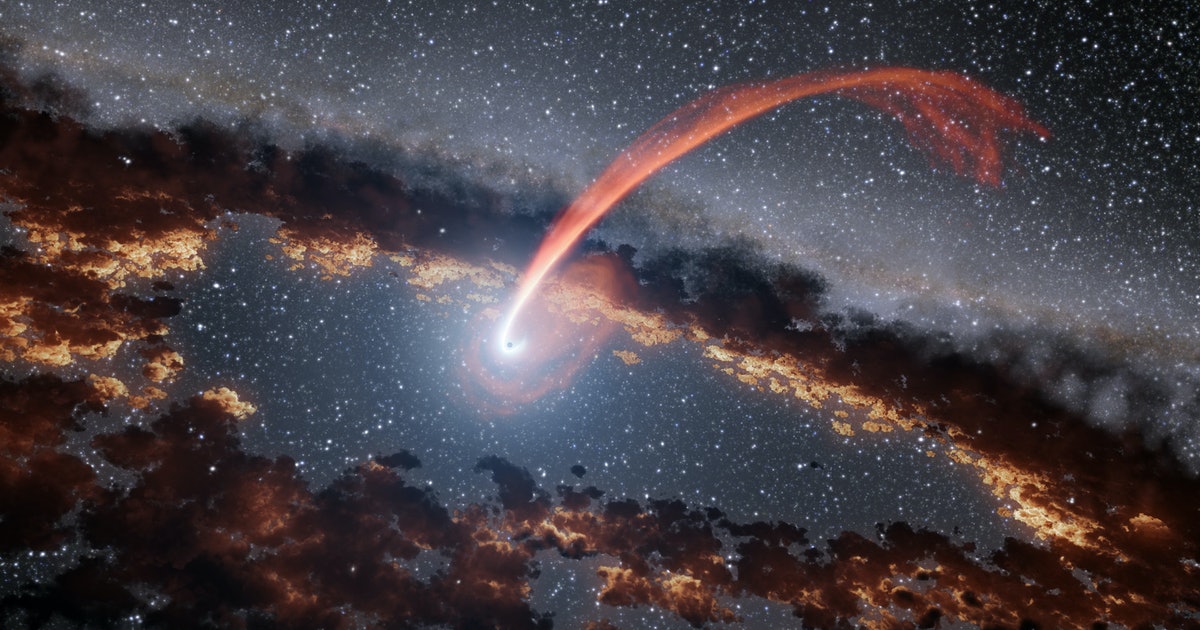 How did supermassive black holes grow? Webb could reveal this key part of the early universe

But JWSTs biggest discoveries are still yet to come and may not be quite so picture-perfect when studying the origins of ancient supermassive black holes (SMBH) lurking in the inky darkness all around us. For astrophysicists like Jinyi Yang, a post-doctoral researcher at the University of Arizona planning to work with JWST data, studying SMBHs with JWST offers a cutting edge perspective on the field’s hottest topic.

“SMBHs are one of the most exciting topics of extragalactic astrophysics,” Yang tells Inverse. “Study[ing]… SMBHs in the young universe will help to answer the questions of how SMBHs form and grow up, [that] are still highly unclear.”

How JWST could reveal black holes in infrared

SMBHs made news recently when scientists from the Event Horizon Telescope captured images of the black hole at the center of our Milky Way galaxy called Sagittarius A* for the first time. Our local black hole was imaged using a ground based telescope which can limit the clarity and depth of its sight due to atmospheric disruptions, but JWST isn’t restricted by the same kinds of terrestrial barriers — though it won’t be able to stare directly into an event horizon.

Roberto Maiolino, an professor of experimental astrophysics at the University of Cambridge and a member of the Near-Infrared Spectrometer (NIRSpec) science team for JWST, says that the telescope and NIRSpec will play an important role in identifying ancient black holes which may stud the center of other, more distant galaxies.

“Webb’s unprecedented sensitivity will be revolutionary for our understanding of supermassive black holes,” Maiolino tells Inverse.

One way JWST will do this, says Maiolino, is to use its infrared instruments to see through “curtains of dust” that currently obscure many active black holes from the view of ground-based telescopes searching only in the visible light spectrum. In some cases, these black holes are something called “quasars”, which are formed when the radiation emitted from black holes “gobbling” up matter outshines the galaxy they call home.

Yang and colleagues from the University of Arizona hope to study quasars using data from NIRSpec and other instruments in the coming months to learn more about their origins.

“In the early Universe, both black holes and galaxies evolved rapidly,” Yang says. “We hope the research of black holes using JWST could tell us how the first generation black holes and massive galaxies form and how their evolutions connect to each other.”

This exploration will be possible in part because JWSTs infrared vision is especially good at seeing into the past thanks to the way light shifts as it moves further away from us, Maiolino says.

“Even more interesting is the possibility offered by Webb about finding and characterizing black holes in the early universe,” he says. “Because of the expansion of the universe, the light of distant galaxies is shifted to the infrared. So Webb can discover and reveal the properties of distant quasars in the early Universe much better than current ground-based telescopes.”

From this ancient perspective on the universe, Maiolino says he’s particularly excited by the possibility of studying something called black hole “seeds,” which can grow into SMBHs. Studying these types of baby black holes could give researchers crucial insight into the lifecycle of a SMBH.

Currently, there are a number of theories already on how this evolution takes place, including that they’re the result of “primeval” clouds of massive gas collapsing, the result black hole mergers, or the offspring of first-generation stars which accrete gas at incredibly fast rates.

Studying the lives of these SMBHs will also help scientists better understand how they impact the galaxies they live in — which could be crucial information to apply to our own SMBH.

“Webb might be able to detect these very first black holes while they are in the process of accreting matter and reveal their nature,” Maiolino says. “Therefore enabling us to discriminate among different theories.”

Of course, it’s also possible that the data from JWST will be completely unexpected and throw all these theories out the window. Either way, we’ll hopefully have a better understanding of these mysterious stellar objects in the coming years.

“Webb is really opening a new discovery space,” Maiolino says. “Therefore, the unexpected is not unexpected.”

A little more than six months into its stellar journey, the James Webb Space Telescope (JWST) is already rivaling Hubble as the world’s favorite spacefaring observatory. Last week, JWST delivered jaw-dropping looks into the universe full of furling gas, smudged distant galaxies, and dazzling starlight. But JWSTs biggest discoveries are still yet to come and…

A little more than six months into its stellar journey, the James Webb Space Telescope (JWST) is already rivaling Hubble as the world’s favorite spacefaring observatory. Last week, JWST delivered jaw-dropping looks into the universe full of furling gas, smudged distant galaxies, and dazzling starlight. But JWSTs biggest discoveries are still yet to come and…