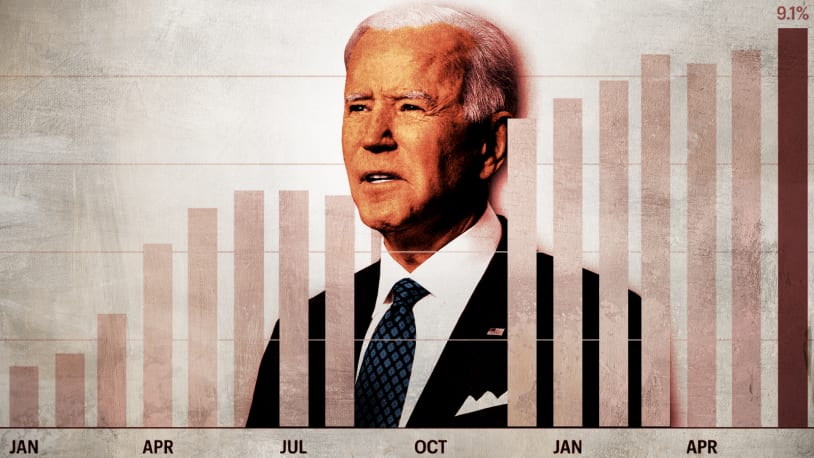 The implications of the latest sky-high inflation data

Inflation reached a fresh 40-year high last month, with consumer prices surging 9.1 percent from a year ago, the U.S. Labor Department recently reported. The June analysis poses yet another headache for the Biden administration, which is struggling to disassociate itself from rising prices, and also serves to solidify expectations that the Federal Reserve will once again raise interest rates by three-quarters of a percentage point at its next meeting in July. In the meantime, however, here’s a quick look at what some of the experts have to say about the implications of the worse-than-expected numbers:

The markets aren’t panicking, which could be a good thing

Financial markets “largely shrugged off” the news out of last Wednesday’s report, opinion columnist Paul Krugman wrote for The New York Times. They “appear to believe that the worst” of inflation is “behind us” — but why?

For one thing, the rising gasoline prices that drove much of the inflation in June have already begun to decline. And secondly, there are “a bunch of other factors that should dampen inflation but aren’t yet reflected in government reports.”

“[T]he message we’re getting from the markets — a message backed by a lot of data that hasn’t yet made it into official consumer price numbers — is, don’t panic,” Krugman opined, while noting, however, that he could be wrong. “Inflation is not, in fact, out of control, though the pain many consumers are feeling right now is.”

The effect on American workers is the real ‘tragedy’

“Well, that was ugly,” The Wall Street Journal Editorial Board began a column released hours after the Labor Department’s report. “No wonder Americans are in a sour mood.”

Though some analysts have taken comfort in the fact that the so-called core consumer price index — which excludes volatile food and energy categories — rose only 0.7 percent in June, said prices “accelerated in June from May, and are up at an annual rate of 8 percent in the last three months. Inflation can’t be dismissed as largely the result of energy prices and Ukraine,” the board argued.

But “[t]he greatest tragedy” here is for “American workers, who are suffering the largest reduction in real wages since the 1970s.” That said, “the policy implications are clear enough. The Fed has every reason to keep tightening” interest rates, the board continued.

Further, “rising inflation should take more domestic Congressional spending sprees off the table,” including any version of Biden’s once-flagship Build Back Better legislation. “The return of virulent inflation didn’t have to happen, and the experience should discredit the policies that brought it on,” the board added, flagging excessive spending under both the current and previous administrations, as well as Democrats’ “trillions of dollars in welfare payments” as probable cause.

Actually, argued David A. Super, a professor at Georgetown Law that previously worked as general counsel for the Center on Budget and Policy Priorities, “the recent inflation report provides a compelling reason” for Democrats to move forward with their economic plan.

Writing for The Hill, Super posited that, though 9.1 percent inflation is “jarring,” “finalizing and passing the pending economic package is one of the most important things that can be done to lower inflation while safeguarding the strong jobs market” the U.S. has “enjoyed” since the end of the pandemic-induced recession.

“Perhaps the biggest concern in fighting rising prices is preventing inflationary expectations from permeating the economy,” Super mused after detailing a number of other pressures, including supply chain problems and the war in Ukraine. If consumers expect prices to continue rising, it could set off a dangerous wage-price spiral in which rampant inflation becomes self-fulfilling.

“We can keep inflationary expectations low — and lower inflation in the process — if we show the markets that we are diversifying our energy supply,” Super wrote. “Seeing Congress acting proactively to reduce the deficit also should reassure the markets that Congress and the Federal Reserve are working in harmony to reduce inflation rather than pulling against one another, as has sometimes been the case in the past.” Further, such action should serve to “dampen fears of a recession.”

There’s no doubt that the June report was bad, and that the Fed must move aggressively to bring down prices. But in preparing to act, it must also consider “the risk presented by the next presidential election,” opined Washington Post columnist Sebastian Mallaby.

“For now, the Fed is lucky to be working alongside a supportive executive. President Biden is old enough to remember the 1970s and the cost of letting inflation go unchecked,” Mallaby wrote. But “[h]istorically speaking, this is unusual.” Plenty of U.S. presidents, including former President Donald Trump, have “attacked the central bank whenever inflation reared its head and the Fed tried to quash it.”

“If Trump or a Trumpist wins in 2024,” Mallaby continued, “he or she will probably attack the Fed for attacking inflation at the expense of growth and jobs, even though the best thing the Fed can do for the economy is to deliver stable prices. … Because of this political factor, the inflation fight is especially urgent.”

“If the Fed fails to control prices in the next 2.5 years,” Mallaby concluded, “its job might become much harder.”

Inflation reached a fresh 40-year high last month, with consumer prices surging 9.1 percent from a year ago, the U.S. Labor Department recently reported. The June analysis poses yet another headache for the Biden administration, which is struggling to disassociate itself from rising prices, and also serves to solidify expectations that the Federal Reserve will…

Inflation reached a fresh 40-year high last month, with consumer prices surging 9.1 percent from a year ago, the U.S. Labor Department recently reported. The June analysis poses yet another headache for the Biden administration, which is struggling to disassociate itself from rising prices, and also serves to solidify expectations that the Federal Reserve will…

Is Biden’s age really what Democrats are worried about?

Is Liz Cheney finished? | The Week