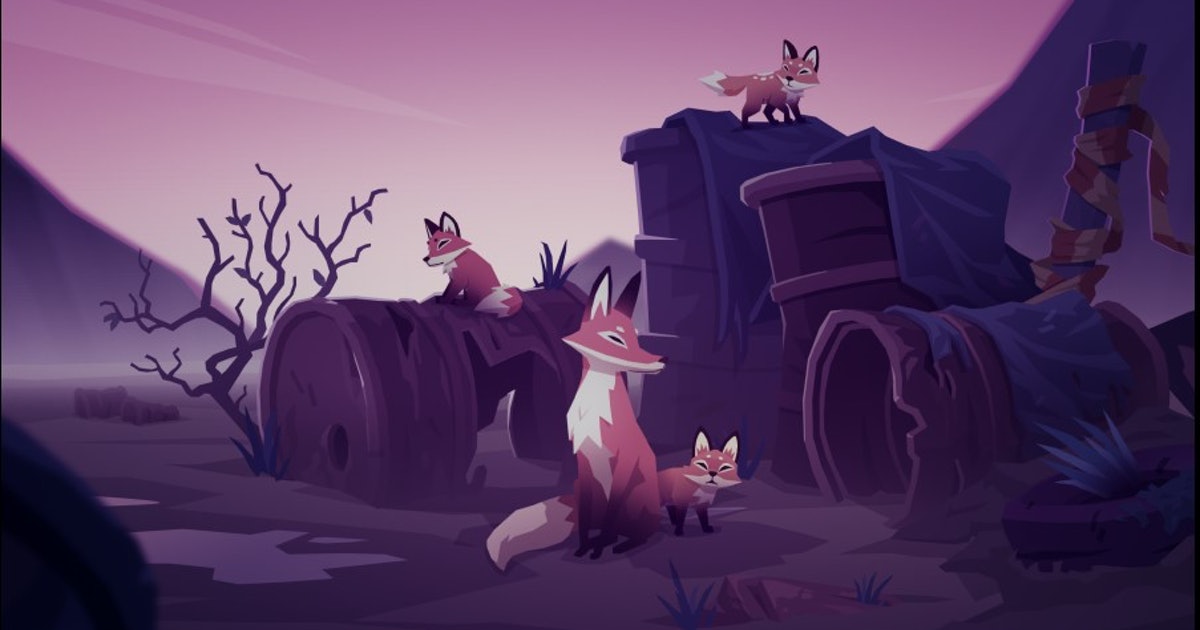 Looks pretty but says nothing

As the trees burn, a lick of flame dashes across the ground.

No this isn’t fire; it is a fox. She tries to escape the home crumbling around her, desperately hoping to survive for the sake of the four hearts that beat within her belly. The trees that have lived for centuries turn to ash, and the fox finds shelter in a rocky refuge. With doom surrounding her, life springs forth. Four cubs brought into a dying world.

These opening moments from Endling: Extinction is Forever are some of the most gorgeous I have experienced in a game. The first title from developer Herobeat Studios, Endling follows the last fox on Earth, struggling to keep her cubs alive in a world that grows more hostile daily. With one cub kidnapped by a hunter, you must balance the responsibilities of keeping your remaining cubs alive while also searching for your missing child.

This is life in Endling: Extinction is Forever, a side-scrolling survival game from developer Herobeat Studios. Endling’s themes of environmentalism are admirable, but the game’s exploration of the issue never goes deeper than surface-level. Despite jaw-dropping visuals, Endling’s simplistic story and restrictive gameplay fail to deliver on the promise of the game’s opening minutes, leading to a disappointing and tedious experience.

Survive. That is the main goal of Endling. Survive the pollution that grows more widespread every day. Survive the humans who are looking to hunt you down to turn a profit on your pelt. Survive, even with a dwindling food supply. The game engrains this instinct into the player by using a day-night cycle. Each night, you venture outside of your shelter to explore the world. As the day approaches, so do bigger threats, and you must return to your home.

Early into the game, one of your cubs is kidnapped by a hunter, while your other three cubs are too young to fend for themselves. The finite time in each day must be split between looking for clues about your lost cub and hunting prey to feed the three you still have. This dichotomy should add tension to the minute-to-minute gameplay of Endling, but it never delivers on the stakes.

Taking care of the three cubs still by your side proves to be an incredibly simple task. They can go for extended periods of time without needing food, and the threat of starvation has no impact on gameplay. Once the bar that tracks food is empty, a timer will start above a cub. If they aren’t fed before it runs out, they will perish. That sounds tense, but it only happened once in my four-hour playthrough. That’s because food isn’t all that scarce in Endling, even though humans are actively cutting down forests and polluting rivers. To make the most of each day, I found myself sprinting through the map, often leaving my cubs unsupervised, and only feeding them every couple of days when it became absolutely necessary.

Exploring the map in search of your lost cub becomes the primary drive. You might catch a scent of them which will lead to new areas and clues about where they are. Yet search as much as you want, you will not find your cub any quicker than another player. Clues to the whereabouts of your cub only become discoverable on set days. Endling literally gatekeeps players from progressing through the story or the map by locking off entire areas, meaning you will retread the same few paths for days on end, passing the time waiting for the next clue to unlock. This might have worked if keeping your other three cubs fed and alive was at all interesting or suspenseful. Yet for a game that says “extinction is forever,” there is no real sense of danger, which leaves the game feeling monotonous.

It eventually becomes clear that Endling isn’t a game about the fox and her cubs. The clues to the whereabouts of your lost club come in the way of scents you discover. Each new day where a scent becomes available leads to three vignettes that show the journey of the hunter who captured your cub. As you find more clues, you will learn about the hunter. Having outlived his wife, the hunter seeks to provide for his young daughter by whatever means necessary. A local corporation (the same one responsible for deforestation and pollution in the world) is giving a reward to those who bring in fur.

The game looks at the player and says “That bad guy, he’s just like you. Really makes you think, doesn’t it?” The game’s themes of environmentalism and resource scarcity are a cautionary tale about the current state of the human species. We are the last of a dying species, we are endlings. Yet this ham-fisted attempt at pulling the rug out from under the player’s feet rings hollow and feels empty of any real meaning.

Environmentalism is not a new theme in video games. Final Fantasy VII, one of the most popular games of all time, is a story explicitly about the need for direct action against morally evil corporations that are LITERALLY sucking the planet of its lifeforce. “I can hear the cries of the planet,” exclaims one character to Cloud. Final Fantasy VII does not shy away from the difficult questions that come with an eco-conscious story, forcing each member of the party to grapple with their own complicity in the demise of the world to make real change. Barret even commits to protecting the condors from extinction at the hands of Shinra, understanding he needs to act to protect the ecosystem of the planet.

Endling: Extinction is Forever hides a monotonous experience behind a striking visual aesthetic and an empty message about the relationship between humanity and the environment. The gameplay never fully commits to building the relationship between the mother and her cubs, which leaves the whole story feeling emotionless and bare. The end result is more “call of the mild” than Call of the Wild.

Endling: Extinction is Forever is available on Xbox One, PS4, and PC. Inverse reviewed the game on PC.

As the trees burn, a lick of flame dashes across the ground. No this isn’t fire; it is a fox. She tries to escape the home crumbling around her, desperately hoping to survive for the sake of the four hearts that beat within her belly. The trees that have lived for centuries turn to ash,…

As the trees burn, a lick of flame dashes across the ground. No this isn’t fire; it is a fox. She tries to escape the home crumbling around her, desperately hoping to survive for the sake of the four hearts that beat within her belly. The trees that have lived for centuries turn to ash,…