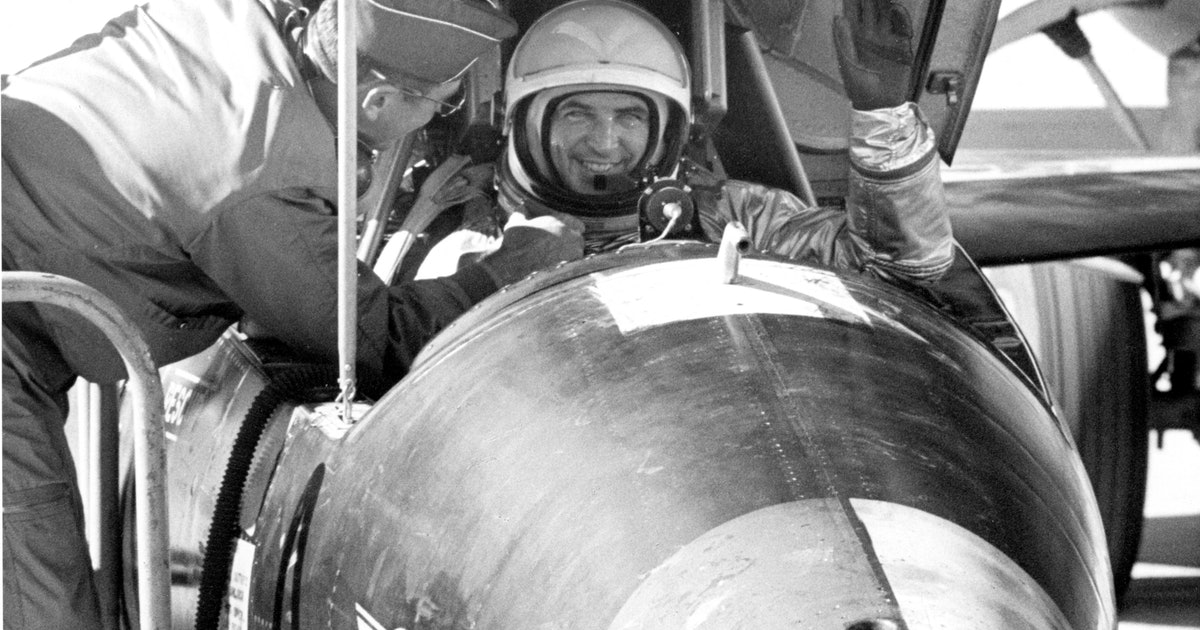 60 years ago, a military pilot made it to space — and set off a debate that rages today

Sixty years ago today, Robert Micheal White returned from space. But unlike most spacefarers, he didn’t get there in a spaceship.

Instead, he took a state-of-the-art rocket plane up, making him the first American astronaut to have arrived in space without a traditional spaceship. And his flight on July 17, 1962, paved the way for space tourism and opened up an ongoing debate about where space begins.

One of the things that made White’s flight unique was that, for the first time in spaceflight history, White had control over his own trajectory — from take-off to landing. The four Americans who reached space before White were all part of the Mercury Seven — and their launches were remotely steered by ground control.

The Mercury missions were largely an effort to balance the Soviet Union’s progress in space after the launch of Sputnik 1 in October 1957. The Mercury missions happened under the banner of NASA, founded in 1958. But White was part of a separate, joint program between the United States Air Force and NASA to test rocket-powered aircraft that traveled at hypersonic speeds called the X-15 program.

The program represented an unprecedented acceleration in the development of aeronautics. Reaching hypersonic (far, far above the speed of sound) speeds is no small feat. These aircraft, developed in the 1960s, were created and tested explicitly to travel faster than the speed of sound. These are the kind of flying machines that produce mach cones by breaking the sound barrier.

Michelle Evans, author of X-15: Rocket Plane Flying the First Wings into Space, remarks on how successful the program was, even by today’s standards. Evans explained her motivation to write about the X-15, as opposed to any other of the X-planes, Evans tells Inverse, “it is the highest and fastest research aircraft that ever flew. So it’s like, why not write a book about the best?”

Robert White quickly set a record in the X-15 program, reaching a speed of 2,275 miles per hour. He was then the first person to reach Mach 4 (3069 miles per hour), and within the next eight months he reached Mach 5 (3836 miles per hour); thus, he was the first pilot to hit Mach 3, 4, and 5. However, it was his flight into space on July 17, 1962, that catapulted him onto the cover of Life magazine in August of that year.

While White held the record at the time for the highest altitude reached in a winged aircraft, the world record for the fastest speed ever achieved by a crewed aircraft was reached by another pilot in the program, William J. Knight, when he reached a speed of 4,520 miles per hour, or Mach 6.7. A Mach unit is the ratio of the speed of an object to the speed of sound, so Knight was traveling in the X-15 6.7 times faster than the speed of sound. His record still stands to this day.

“Everybody knows the Blackbird. And yet, it only flew half as fast as the X-15 did, and nothing else has come close,” explained Evans. “And all those years, over 50 years now, nothing is even on the drawing board to take over what the X-15 did. It took until 2004 for something to finally beat the altitude on the X-15.”

As it turns out, the X-15 program, and White’s historic flight to space, not only paved the way for progress in military domains, but also for space tourism. That “something” Evans was referring to that overtook the X-15 in 2004 is SpaceShipOne, a suborbital rocket-powered aircraft that won the Ansari X prize — a prize offering $10 million to the first non-government entity that could build a vehicle that could carry passengers into space repeatedly.

SpaceShipOne gradually evolved into SpaceShipTwo, a ship now owned and operated by Virgin Galactic for space tourism. A ticket to space on the SpaceShipTwo comes with a lofty price tag of $250,000 for a space tourist, but can also be used by space agencies, like NASA, for research missions.

Where does space begin?

The definition of space for tourists, pilots, and governments alike, though, is not without controversy. The Virgin Galactic SpaceShipTwo crossed the USAF’s 50-mile border that defines space, but not yet the 62-mile Kármán line, which Jeff Bezos’ space company Blue Origin surpassed in January 2016 when the suborbital New Shepard capsule reached an altitude of 63 miles.

International law, however, never defines the actual boundary of space. There are varied definitions by institution for the meaning of the boundary of space. For instance, the Fédération aéronautique internationale (FAI), an international organization responsible for keeping aeronautical records, defines space as the Kármán line, 100 km (or 62 miles) above mean sea level, although theoretical ranges as low as 30 km and as high as 1.5 million km have been proposed.

The concept was to define a threshold where an object is more subject to the forces of the atmosphere than gravity. Since, by nature, the atmosphere — and objects in space themselves — can be highly variable, choosing a specific boundary can seem arbitrary; the Kármán line can be more dependent on its application than on its inherent properties.

Jonathan McDowell, an astrophysics researcher at the Harvard Smithsonian Institute who is part of the Chandra X-ray Observatory team, supports the USAF’s definition of the edge of space, writing about it in a 2018 paper entitled “The edge of space: Revisiting the Kármán Line.”

McDowell, who also closely chronicles aeronautics and astronautics history began working on the research for his article starting in the 1990s in an effort to resolve disputes around this value that might create discrepancies in record keeping. He took up where Kármán left off — in search of casting the widest net possible with a definition for the threshold of space that could be used for as many applications as possible, but is based on physical principles.

McDowell wrote a code to simulate the variability of the atmosphere, taking into account parameters that depend on things like solar activity, time of day, and location. He ran that model 30 million times to get the density in the atmosphere versus altitude. Then also called into question what other forces come into play, like the drag force — which also depends on the shape of an object.

McDowell explained that the shape of an object would affect how much atmospheric conditions can perturb it. Something like a balloon or a sail is subject to smaller atmospheric perturbations and would thus have a higher Kármán line, whereas something shaped like a cannonball would be less excitable and have a lower Kármán line. McDowell tested a standard satellite, but also satellites with extreme properties that may affect their interactions with the atmosphere.

In the end, it wasn’t the environmental variables that influenced the meaning of space so much as it was the objects themselves, McDowell says.

“The main difference is between the cannonball and the sail. And even there, they’re not that different, the cannonball Kármán line is about 70 km, and the sail Kármán line is about 90 km,” McDowell tells Inverse. “And so the answer is, cutting to the chase, 80 km, plus or minus 10, for almost any set of parameters you like. And I was gobsmacked because I was like, okay, that’s way more well defined than I actually expected.”

After his analysis, McDowell noted consistency with his 80 km from many perspectives.

“It agrees with the mesosphere, and it agrees with the actual minimum perigee height of satellites. So, it all hangs out,” he says. “It agrees with a sociological choice that the US made in picking 50 miles for its national value. So with all of that together, my argument is, if you’re going to pick a line and call it the common line, then it should be 80 [km] and not 100 [km].”

“You know, as you get higher and higher, obviously, the air thins out. There isn’t just all of a sudden you’ve got air and then the next foot, you’ve got no air,” she said. “It actually matched something within the atmosphere. It’s the breakpoint between the mesosphere and the thermosphere.

“So, there is a scientific justification for that,” she adds. “The FAI line, the von Karman Line at 100 km, doesn’t match anything like that. It’s just a number. So I actually tend to side with the Air Force.”

Curiously, though, Evans explained that while the USAF pilots from the X-15 project all received astronaut’s wings, NASA’s own pilots who managed to surpass the 80 km threshold, but not 100 km, didn’t receive their wings until 2005 because astronauts from private entities were being recognized for reaching similar altitudes.

“It was this weird dichotomy where we accept the 50 miles versus the 100 km [62 mi], but they just never officially recognized their pilots until much, much later. And the only reason they finally recognized them in 2005 was because of SpaceShipOne, because they were recognizing the pilots of SpaceShipOne as astronauts. There was a big uproar about NASA not accepting their own X-15 pilots. So, they finally came back to reconsider and decided, ‘okay, yeah, I guess we’ll do that.’”

Several NASA’s astronauts in the “50-61 mile club” received their wings posthumously. Fortunately, though, Robert White was part of the Air Force, and was the first astronaut recognized within the Air Force. Affiliations aside, he was one of the first pilots to see the Earth from such a new perspective. Though it may come as a disappointment to flat-earthers, one of Robert White’s more awe-inspiring quotes in the article where he graced the cover of Life magazine was regarding Earth’s curvature.

“The sky was a deep, dark, blue-black. I could see the San Francisco Bay area and all the way down to the coast of Mexico,” White told Life. “And I could see the curvature of the earth more clearly than I ever had before. It was a fabulous sight.”

Sixty years ago today, Robert Micheal White returned from space. But unlike most spacefarers, he didn’t get there in a spaceship. Instead, he took a state-of-the-art rocket plane up, making him the first American astronaut to have arrived in space without a traditional spaceship. And his flight on July 17, 1962, paved the way for…

Sixty years ago today, Robert Micheal White returned from space. But unlike most spacefarers, he didn’t get there in a spaceship. Instead, he took a state-of-the-art rocket plane up, making him the first American astronaut to have arrived in space without a traditional spaceship. And his flight on July 17, 1962, paved the way for…

“It’s a joy to finally have such high-quality data”