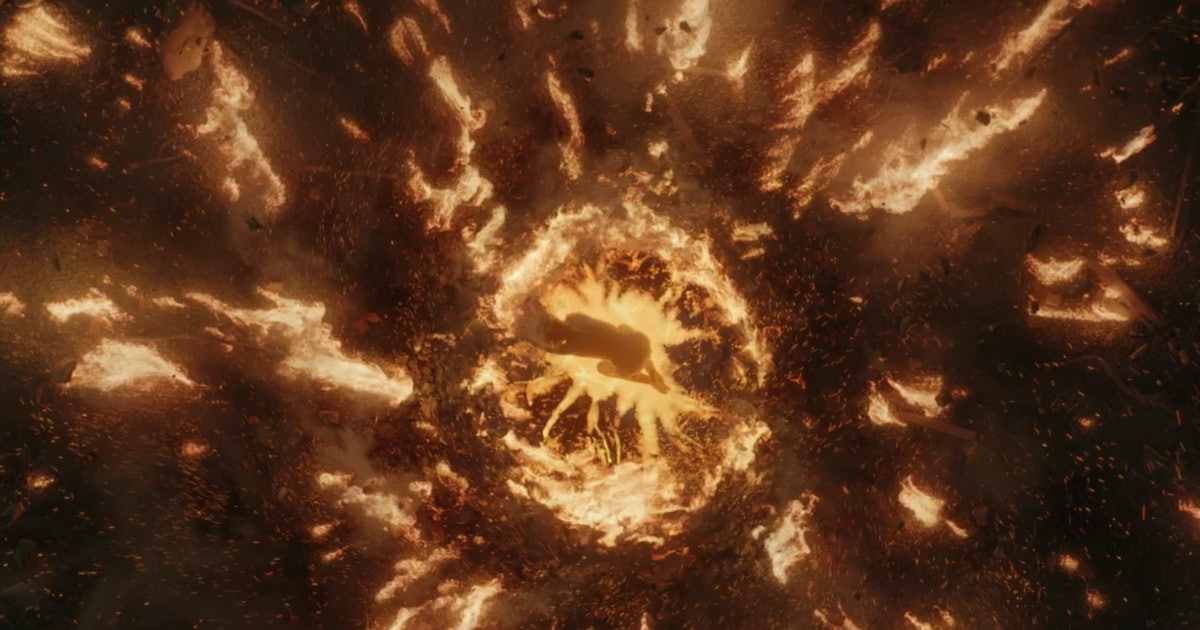 The villains of Amazon’s upcoming Lord of the Rings prequel series, The Lord of the Rings: The Rings of Power, remain shrouded in mystery. Even the latest trailer for The Rings of Power focuses more on the series’ heroes than it does its villains, spotlighting noble characters like Galadriel (Morfydd Clark), Elrond (Robert Aramayo), and Gil-galad (Benjamin Walker). This approach, notably, lines up with what the Rings of Power showrunners have said fans should expect from the show’s hero-centric first season. The second trailer released Thursday, however, is full of ominous warnings and somber images hinting at the nefarious forces at work.

Walker’s Gil-galad even predicts that “darkness will march over the face of the Earth.” As fans of J.R.R. Tolkien’s beloved fantasy world will already know, his hunch is totally correct.

In fact, even though the Rings of Power trailer doesn’t spend much time with the show’s central villains, they do still appear at different points throughout it. With that in mind, here’s everything you should know about Ar-Pharazôn (Trystan Gravelle), Adar (Joseph Mawle), and The Stranger (Daniel Weyman).

The second Rings of Power trailer offers plenty of new looks at the show’s version of Númenor, the great island kingdom of Men that is destined to fall before the end of the Second Age of Middle-earth. However, the trailer doesn’t just show us shots of ​​Númenor’s cities and coasts but also several of its key citizens, including Elendil (Lloyd Owen), Isildur (Maxim Baldry), and Tar-Míriel (Cynthia Addai-Robinson).

The trailer also features several shots of Trystan Gravelle’s Ar-Pharazôn. At the start of the series, Pharazôn will serve as a trusted advisor to Addai-Robinson’s Míriel, the queen regent of Númenor. Pharazôn’s future includes not only an underhanded royal ascension but also several disastrously arrogant decisions.

In the Rings of Power trailer, Pharazôn is briefly shown standing in front of a cheering crowd of Númenóreans. It seems safe to say that he will be far more powerful among his people than his official title suggests. Without spoiling too much, Pharazôn has the potential to be the second-biggest villain in The Rings of Power, so his presence in the series’ latest trailer is worth noting.

As of this writing, Trystan Gravelle’s Pharazôn is the only villain in the latest Rings of Power trailer who has been officially named by Amazon. But that doesn’t mean he’s the only villainous figure shown in the teaser.

One of the series’ other mysterious, supposedly antagonist figures can be seen very briefly around the 1:30 mark of the latest Rings of Power trailer. During the moment in question, a pale, humanoid figure can be seen leading an army of torch-wielding Orcs across a bridge. If early Rings of Power leaks are to be believed, this figure is Adar, a villain created for The Rings of Power who is expected to be played by Game of Thrones alum Richard Mawle.

Several reliable reports have claimed that Adar will be an evil figure who is in charge of an army of Orcs when The Rings of Power begins, which means he may serve as the show’s initial Sauron stand-in. However, Mawle’s villain is said to be a totally original character, which means he will not ultimately be The Rings of Power’s primary antagonist. That honor will, of course, go to Sauron.

The Mystery of Meteor Man

Earlier this week, we published a piece about a character in The Rings of Power who is known officially as The Stranger, but whom Lord of the Rings fans frequently refer to as “Meteor Man.” The character, who will be played by Daniel Weyman, appears to crash land on Middle-earth as part of the meteor strike that has been frequently teased throughout the early trailers for The Rings of Power.

Not much is known about Meteor Man other than the fact that he will be taken in by the Harfoots following his crash landing on Middle-earth. However, many Tolkien fans have come to believe that Meteor Man is secretly Sauron in disguise. Sauron does canonically masquerade as another person when he first re-emerges during the Second Age of Middle-earth, and several early leaks have claimed that he will spend most of The Rings of Power’s first season pretending to be someone else.

Therefore, it seems only inevitable that Sauron will be introduced as a different character in The Rings of Power, and Meteor Man seems like the most likely candidate to fill that role right now. Just in case there wasn’t enough evidence to support the theory that he is secretly Sauron in disguise, an overhead shot of Meteor Man’s arrival in the latest Rings of Power trailer (see above) makes it look like he is standing at the center of the Eye of Sauron from Peter Jackson’s Lord of the Rings films.

In other words, Meteor Man is someone that both book readers and casual viewers alike will want to keep their eyes on when The Rings of Power premieres this September.

The Inverse Analysis — The Lord of the Rings: The Rings of Power boasts an impressive and diverse ensemble of actors, many of whom are playing characters that casual Tolkien fans may never have heard of before. For that reason, it’s easy to understand why the latest trailer for The Rings of Power focuses as heavily as it does on well-known characters like Galadriel and Elrond.

However, the trailer also makes it clear that Middle-earth will not be in as peaceful of a state as many of the show’s characters believe when The Rings of Power begins. As a matter of fact, some very bad things are clearly already brewing in the series’ second trailer. Ar-Pharazôn, Adar, and Meteor Man will likely be responsible for many of the dark events that are set to unfold throughout The Rings of Power.

The Lord of the Rings: The Rings of Power premieres Friday, September 2 on Prime Video.