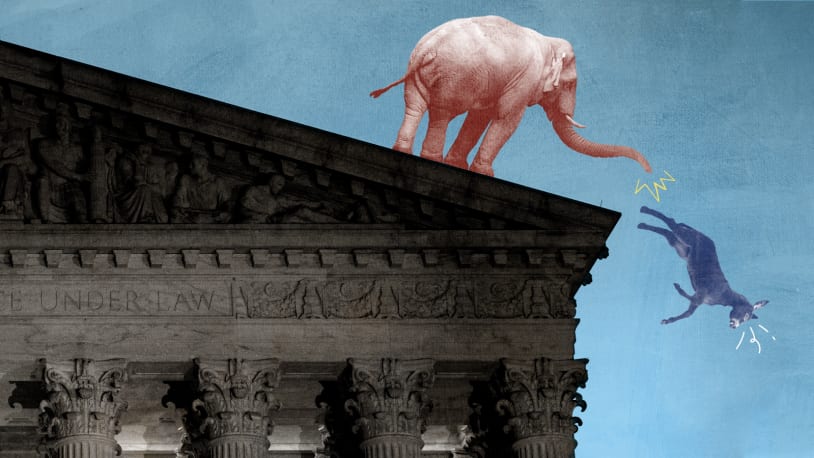 Could this SCOTUS case push America toward one-party rule?

The Supreme Court has announced its intention to take up Moore v. Harper this fall, a case that critics claim is “perhaps the gravest threat to American democracy since the Jan. 6 attack” and has the potential to inch the United States closer to one-party rule. Here’s everything you need to know:

North Carolina House Speaker Timothy Moore (R) is suing a voter named Rebecca Harper as part of a dispute over a federal electoral map drawn by the state’s Republican-controlled legislature. According to The Carolina Journal, the case will test a legal theory known as the “independent state legislature doctrine,” which asserts that “only the state legislature has the power to regulate federal elections, without interference from state courts.”

The basis for the doctrine lies in Article I, Section 4 of the U.S. Constitution, which states, “Times, Places, and Manner of holding Elections for Senators and Representatives, shall be prescribed in each State by the Legislature thereof.” Proponents of the “independent state legislature doctrine” argue that this clause gives state legislatures sole power to draw congressional districts, set rules for federal elections, and appoint presidential electors, and that state courts have no power to interfere — even if the legislature blatantly violates the state constitution.

Which, in this case, it did. The North Carolina Supreme Court ruled in February that the proposed map, which would have guaranteed Republicans easy wins in 10 of the state’s 14 districts, was “unconstitutional beyond a reasonable doubt under the … North Carolina Constitution.”

The situation in North Carolina is not so clear-cut, however. Robert Barnes noted in The Washington Post that the state’s General Assembly passed a law two decades ago empowering state courts to review electoral maps and even create their own “interim districting plan[s].” Moore’s lawyers must therefore prove that the legislature violated the U.S. Constitution by abdicating its own authority over redistricting.

The U.S. Supreme Court rejected the case in March but agreed on June 30 to hear it. Justices Clarence Thomas, Samuel Alito, Neil Gorsuch, and Brett Kavanaugh have all signaled their openness to Moore’s argument. The Washington Post‘s editorial board suggests that Chief Justice John Roberts — who three years ago left open the possibility that state courts could override partisan gerrymanders — is now “poised” to side with Moore as well. The board also considers Justice Amy Coney Barrett, a noted Constitutional originalist, as “a possible swing vote.” All three of the court’s liberals are expected to reject the independent state legislature doctrine.

The case has been picking up steam given that oral arguments will be heard by the GOP-majority Supreme Court on Dec. 7, and a decision is likely to come down sometime in the summer of 2023. This means that whatever the Court decides will likely have a direct effect on the 2024 presidential election.

What about the Electoral College?

One notable example of the domino effect of Moore v. Harper can be seen in Wisconsin, home to a Republican-led state legislature that gained even more seats during the 2022 midterm elections. In January, Ryan Cooper wrote for The Week that the state of Wisconsin “effectively exists under one-party rule.” Liberals can still win statewide elections — Democrat Tony Evers was re-elected governor during the midterms — but state legislative districts are hopelessly gerrymandered in favor of Republicans. If the Supreme Court sides with Moore, GOP-controlled legislatures in states like Wisconsin would have full authority to rig not only their own states’ legislative elections, but elections to the U.S. House of Representatives as well.

It might not stop there, either. Article II, Section 1 of the U.S. Constitution empowers each state to “appoint, in such Manner as the Legislature thereof may direct, a Number of Electors” equal to that state’s number of senators and representatives. The clause doesn’t say anything about the popular vote. This means, in theory, that state legislators can appoint whoever they want to the Electoral College, including entirely separate slates of electors. If the Court sides with Moore next summer on the question of federal redistricting, they’re likely to apply the same reasoning to presidential elections. This interpretation was floated by conservative justices — including Thomas — during the Bush v. Gore (2000) case that handed George W. Bush the presidency.

The Electoral Count Act of 1887 stipulates that each state’s slate of electors must be certified by the governor of that state. In states like Wisconsin— which has a Democratic governor — this law could prevent the Republican-led legislature from handing the state’s electoral votes to a losing Republican candidate. But if the independent state legislature doctrine is correct, then the governor has no right to usurp the legislature’s constitutionally granted powers. That provision of the Electoral Count Act (ECA) would be struck down.

This idea “is quickly becoming dogma among Republican legal apparatchiks,” Cooper wrote. Convincing Republican-controlled states won by President Biden to submit alternate slates of Republican electors was a key part of Trump lawyer John Eastman’s strategy to overturn the 2020 presidential election, though it eventually failed. His plan also rested on the assumption that the ECA is “likely unconstitutional.”

Zach Praiss of the nonprofit Accountable Tech and progressive talk show host Thom Hartmann have laid out similar nightmare scenarios that could arise if the Court rules in Moore’s favor. Hartmann imagines a 2024 presidential contest between Biden and Florida Gov. Ron DeSantis, in which Biden wins the popular vote in Georgia, North Carolina, Wisconsin, Michigan, Pennsylvania, and Arizona. The GOP-controlled legislatures of these six states then decide to disregard the will of the voters and award their 88 electoral votes to DeSantis, which would almost certainly make him the next president.

Republicans control both legislative houses in 30 states, plus the unicameral legislature of Nebraska. Those states control over 300 electoral votes, more than enough to elect a president.

“It is difficult … to see the desire to put sole control of election rules in the hands of a partisan legislative body as anything more than a power grab,” argued Christine Adams in The Washington Post. Laurence H. Tribe and Dennis Aftergut were even blunter in the Los Angeles Times: “Adopting the independent state legislature theory would amount to right-wing justices making up law to create an outcome of one-party rule.”

Additionally, Quinta Jurecic wrote in The Atlantic that “any state-level effort to upend the 2024 presidential election on the basis of … the independent state legislature theory would depend, in part, on the fact that the theory is difficult for laypeople to understand — and therefore open to distortion.”

What can be done?

There may still be a silver lining for democracy, as election-denying candidates were almost unanimously defeated during the midterms, putting a damper on efforts to swing the 2024 race. The midterm elections notably included the rejection of a number of secretaries of state candidates — the officials who certify the ballot results — who had said they would tamper with the outcome of the election.

Additionally, if Congress were to pass reforms to the ECA, it would notably close off avenues that could be used to exploit the will of the voters. The effectiveness of any of these actions, though, first depends on how the Supreme Court rules in Moore.

Nov. 30, 2022: This story has been updated with new information throughout.

November 30, 2022 November 30, 2022 The Supreme Court has announced its intention to take up Moore v. Harper this fall, a case that critics claim is “perhaps the gravest threat to American democracy since the Jan. 6 attack” and has the potential to inch the United States closer to one-party rule. Here’s everything you need to…

November 30, 2022 November 30, 2022 The Supreme Court has announced its intention to take up Moore v. Harper this fall, a case that critics claim is “perhaps the gravest threat to American democracy since the Jan. 6 attack” and has the potential to inch the United States closer to one-party rule. Here’s everything you need to…