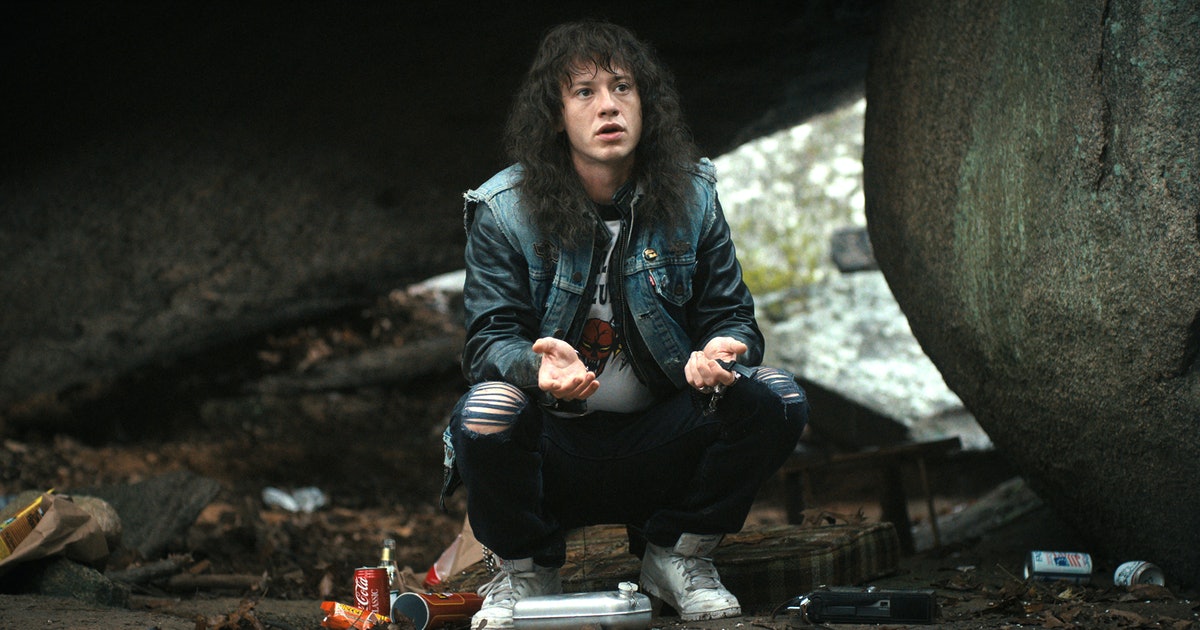 As we all know, Eddie seemingly died in the Upside Down while luring Demobats away from Vecna’s lair. He was strangled, bitten numerous times, and presumably bled out. Two days later, Dustin limps his way through the real world and tells Eddie’s uncle the half-truth: Eddie died during the “earthquake.”

Logistically, Eddie had to die, as Hawkins had branded him a murderer and public enemy number one. There could be no redemption for him in the public eye, so a noble sacrifice was a fitting end. However, a theory emerged this week that, however unlikely, would allow Eddie to rise again and help to save the day.

The most metal concert in the multiverse — and proof that Eddie is a Chaotic-Good Bard.

The Theory — Redditor u/FearlessStart7574 shared a theory to the Stranger Things subreddit.

“I have this theory that Eddie will become Kas, the vampire,” it reads. “(He is another creature of D&D.) Kas is the right-hand man to Vecna and eventually turns on Vecna and defeats him. Kas has a significant weapon, his sword, as well as [a] shield with spikes on it (just like Eddie’s trash can shield with nails in it).”

In D&D canon, Kas is a vampire and Vecna’s top lieutenant. He wielded the Sword of Kas, a sentient black longsword that convinced Kas to betray Vecna in an attempt to usurp his power. Their explosive battle led to Vecna losing his eye and hand. In the Hellfire Club’s D&D campaign from Stranger Things Season 4 Episode 1, “The Cult of Vecna,” these details match up. The D&D group is at a meeting of cultists when this happens:

“There is one you do not recognize, his skin shriveled, desiccated — and something else,” Eddie narrates as Dungeon Master. “He is not only missing his left arm… but his left eye!” Everyone at the table freaks out, having thought Vecna was dead. “He was killed by Kas!” Mike shrieks in disbelief.

If this theory is correct, then that’s some excellent foreshadowing. But just how likely is it?

The Evidence — For the record, we don’t actually get a close look at Eddie’s wounds. He just goes slack in Dustin’s arms, we cut to Lucas and Max as the sad music plays, and then we jump ahead two days.

This already creates some plot holes: Dustin, Steve, Nancy, and Robin were all still in the Upside Down when the action wrapped up. How did Dustin make it back to the real world with his busted ankle? What exactly happened to Eddie’s body?

One of the comments on this theory has a compelling idea of how this might work out.

“I just have a weird theory that they will revisit these scenes that were possibly skipped during that two days later jump in the finale. I think the Duffer Bros. did that purposefully to go back and revisit the events of those two days in Season 5 when they decide what they want to do.”

This could include a flashback to Dustin leaving Eddie’s body, only for Eddie to come back alive as an undead warrior. Perhaps the Demobats turned him into a vampire? Maybe a wounded Vecna brought him back to life, like how Eleven brought Max back to life? If particles from the Upside Down can reanimate dead Demogorgons and Demodogs in the real world, why not a dead human in the Upside Down?

In an interview with Josh Horowitz for the Happy Sad Confused podcast, Stranger Things co-creators Matt and Ross Duffer confirmed that Eddie was “officially dead.” But at one point Papa was also officially dead, right? Still, they also assured Variety that, despite Robin’s anxiety, Demobat rabies is not a thing. So Steve isn’t at risk, and the Demobat bites probably won’t transform Eddie into Demo-Vampire.

The Inverse Analysis — While fun to think about, this particular theory feels a bit unlikely. We’d all love for Eddie to return, and as much as the Duffers refrain from killing anyone off, one less character to wrangle will make for tighter storytelling. So Eddie’s death will probably stick. Still, chances seem high that Stranger Things Season 5 will lean more into D&D given that Vecna already has asymmetrical hands.

What if Eddie does become some kind of undead general who turns on Vecna in the final act? That would be the only thing in the multiverse more metal than playing Metallica in the Upside Down.

‘Echo’s ‘Daredevil’ cameos have to solve one frustrating MCU mystery