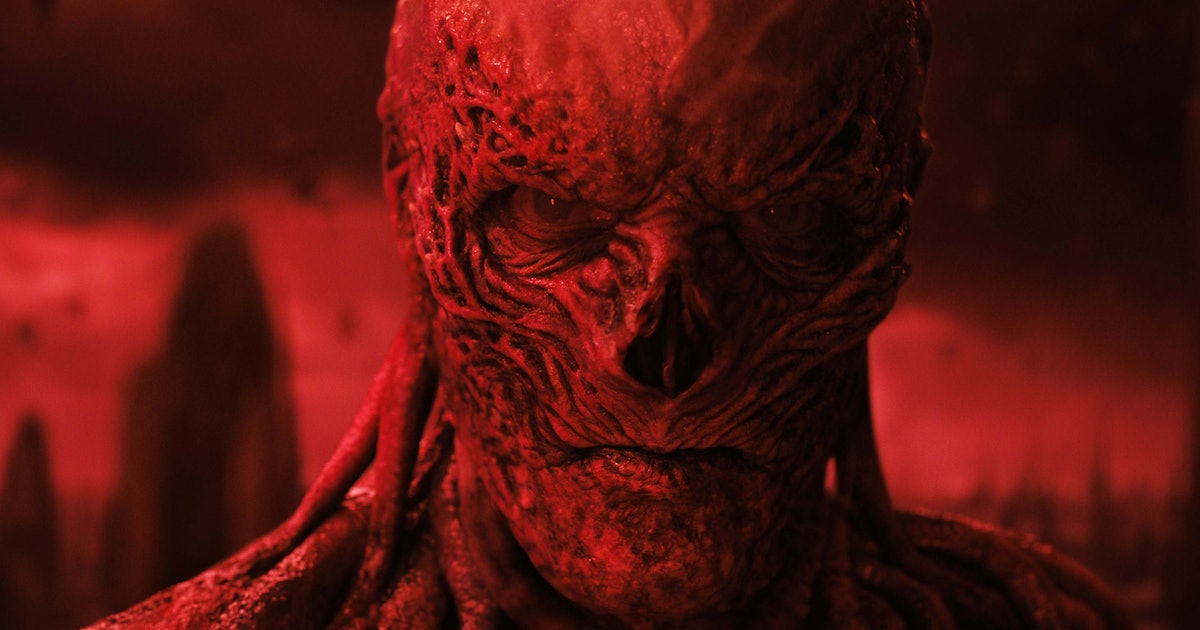 When Vecna first appears, in all of his sinister glory on Stranger Things Season 4, the monster immediately reminded us of another pop culture villain with piercing blue eyes: The Night King from Game of Thrones.

They share similarities because they’re related — well, at least by design.

Veteran makeup artist Barrie Gower and his BGFX team were behind Vecna, as well as The Night King, Zombie Strange in Multiverse of Madness, the titular Arthurian bogeyman in The Green Knight, and the bruxa Vereena in The Witcher, among others.

“It was interesting to join a project that already had this blueprint for a character they were very keen to establish,” Gower tells Inverse, noting the Duffer Brothers had a very clear idea regarding the design of Vecna. “They wanted it to be mostly practical, and for Vecna to have an on-camera, full-body presence which would require a marriage between the makeup artists and the visual effects departments.”

Plans for Vecna, including casting Jamie Campbell Bower to star as the show’s main creep, were set, and Gower was gearing up for about a traditional month-and-a-half long build process, from body casting to completion. But then, Covid-19 struck, and soon Vecna became Gower’s most challenging — but rewarding — fantasy horror character yet.

Inverse spoke with Gower the day Stranger Things 4 premiered on Netflix to discuss Vecna’s design process and how his past works inform his newest creations.

This interview was edited and condensed for clarity.

Inverse: From brainstorming to completing the prosthetics, how long was the process to make Vecna and the other Upside Down creatures in Stranger Things?

Barrie Gower: Vecna is probably one of the most extensive makeup projects we’ve done for a show to date. We cast Jamie back in January 2020, and we worked on the costume for about two and a half months, and then we went into Covid lockdown for about three months. We reconvened in June 2020, and we continued to sculpt the character and carried on with the process.

We had to create many duplicate sets of appliances and prosthetics as well, as you could only use one set most of the time, which would then be removed later on in the day. We had to use potent mineral oils to destroy all the pieces, and we needed to have replacements for about 26 days’ worth.

It was a huge production line, and probably 24-25 appliances made up the Vecna make-up. We had an art finishing team back at our studio in the UK painting all of these pieces and shipping them all out to Atlanta. It was myself, my colleague Duncan Jarman, and three US artists who were with us the majority of the show, applying Vecna’s make-up every single day. We started off with an eight-and-a-half-hour process, and we eventually got it down to just under six hours and 20 minutes. Without Covid, it probably would have been a four-month total build.

How about Multiverse of Madness?

For Benedict Cumberbatch’s makeup for Zombie Strange, that was mostly head and shoulders make-up and some hand appliances. We also did a chest piece for him as well, so it was a lot less extensive, but it was a day-in and day-out application, similar to Vecna. That build probably took six weeks from start to finish. We started off with a 3D print of Benedict and had to sculpt and mold all the silicone appliances through that time.

How often were you collaborating with the directors and producers of Stranger Things and Doctor Strange 2 to ensure you had the design “vision” down pat?

We joined quite early on Doctor Strange, and we didn’t even have a director at the time. There were script revisions going ahead, pre-Covid. And then, Sam Raimi was announced as the director. We are all huge horror fans from the 80s, and we grew up with the Evil Dead movies, so obviously we were all over the moon. Sam is extremely hands-on. He’s got a really creative head on his shoulders, and he knows exactly what he wants. In his early films, there were so many practical and prosthetics makeup effects, and he’s been there and done it for a long time. We collaborated a lot.

“Becoming part of the Stranger Things family was a huge thing for us.”

For Stranger Things, we were asked to come on board for Season 4. We were approached primarily to create Vecna, and we were responsible for a couple of other concerns as well. The makeup department head for Stranger Things, who has been with the show since Season 1, had the foresight and the responsibility for a plethora of makeup effects including swelling, eyebags, injuries, and things like that.

We were mostly in charge of Vecna and Victor Creel, played by Robert Englund. We also had to make David Harbour’s character Jim Hopper fatter for some flashbacks seen at the end of Season 3. We worked very closely with the Duffer Brothers, who were an absolute joy and super creative. They know the world of Stranger Things inside and out and were very clear and precise with what they wanted.

Throughout your career, which characters have been the most difficult to create? And the most rewarding?

Vecna was probably one of the most difficult and rewarding characters we have brought to the screen, and becoming part of the Stranger Things family was a huge thing for us. We were very excited about it because we were massive fans. It was such a technical and long build, from casting Jamie to doing the makeup tests. There were a lot of logistical challenges, but you know, you’re only as good as your team, and I’ve got an incredible one back at our company, BGFX, back in London.

The Night King from Game of Thrones was a similarly technical and long process, as it was predominantly body makeup. We also had the Children of the Forest, which required prosthetic cervical silicone appliances glued to their body, head-to-toe. They were grueling long hours, starting at about 1 a.m.

One of my most challenging make-up projects was transforming Meryl Streep into Margaret Thatcher for The Iron Lady. I regarded it as a career-high to be able to age up Meryl. Playing make-up every day with her was an incredible experience — she’s such a beautiful person. I hold that project very, very fondly in my heart.

When Vecna first appears, in all of his sinister glory on Stranger Things Season 4, the monster immediately reminded us of another pop culture villain with piercing blue eyes: The Night King from Game of Thrones. They share similarities because they’re related — well, at least by design. Veteran makeup artist Barrie Gower and his…

When Vecna first appears, in all of his sinister glory on Stranger Things Season 4, the monster immediately reminded us of another pop culture villain with piercing blue eyes: The Night King from Game of Thrones. They share similarities because they’re related — well, at least by design. Veteran makeup artist Barrie Gower and his…

5 years ago, ‘Wonder Woman’ influenced Marvel in one surprising way