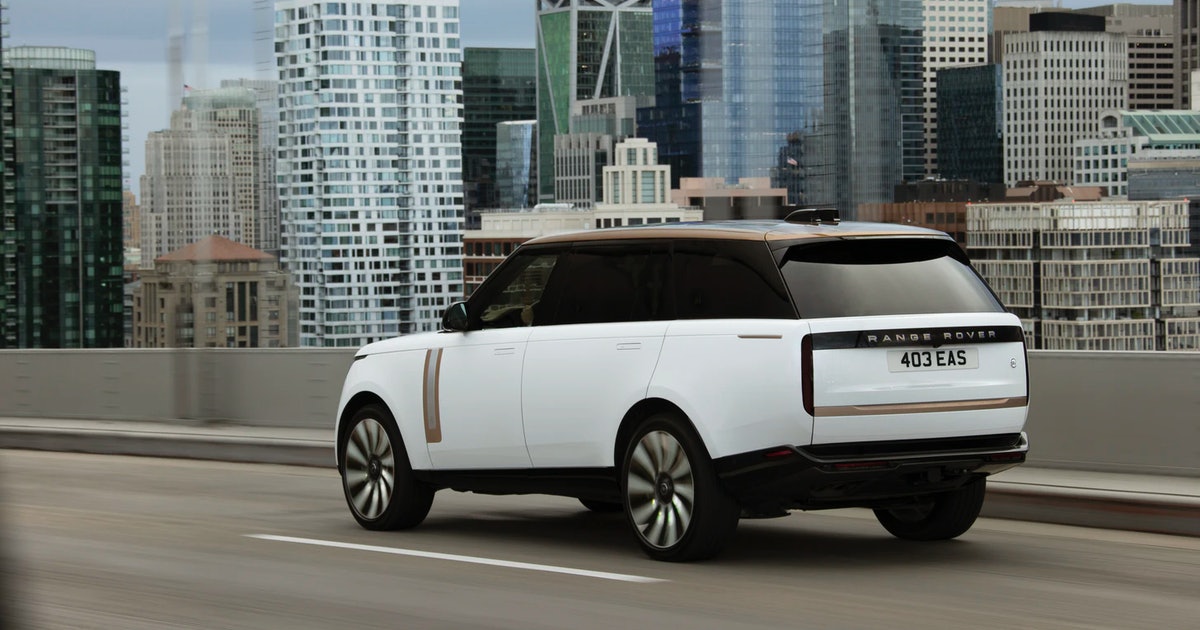 On the wonderful television show Ted Lasso, AFC Richmond owner Rebecca Welton is regularly chauffeured around in a Rolls-Royce Phantom.

The cars of Ted Lasso, as with just about everything else on the Apple TV+ show, are perfectly cast. The wise-beyond-his-years footballer Sam Obisanya drives a Tesla, while the insecure Colin (mantra: “I am a strong and capable man”) drives a flashy Lamborghini.

Family man Leslie Higgins drives a Volvo wagon, while erstwhile kit man Nate — at least in the first episode — drives an old Mini. But as much as wealthy people like to be chauffeured around, that isn’t always necessary, so they need a car to drive.

Naturally, Welton drives a Range Rover, the vehicle of choice for really rich people when driving themselves. The Range Rover is comfortable, luxurious, and effortlessly capable. The new 2022 version — my test car for this week — takes the existing comfort-luxury-capability formula and adds more to each category.

The new Range Rover starts north of $105,000 and runs well into the $200K range if you opt for the ultraluxe SV trim. But the sweet spot is somewhere in the middle, though there are more than enough variants to satisfy the pickiest of clients.

The base P400 SE models offer a delightful 3L turbocharged inline-6 that adds a mild hybrid system for 395 horsepower and 406 lb-ft of torque. This engine, oddly enough, is my favorite of the two available, and I wish I could opt it even for the higher trim models.

Move up to the Autobiography or First Edition, or SV trims, and you get a monstrous 4.4L twin-turbo V8 from BMW, crunching out a wildly unnecessary 523 hp and 553 lb-ft. Do you need a 0-60 mph time of 4.4 seconds in your enormous SUV? No, you do not. But here it is anyway.

There’s also an optional refrigerator with room for a bottle of Dom Perignon (or your preferred 750ml libation) and a pair of chilled crystal wine glasses from British glassmaker Dartington. The fridge, naturally, has a power-retracting door.

Actually driving the Range Rover is as delightful as playing with all the toys in the back seats. I took out the First Edition, a $170,000 long-wheelbase option that I’d be overjoyed to have in my driveway, and was immediately blown away by what I didn’t hear.

An epic active noise cancellation system uses a set of microphones outside of the car and even in the engine bay and accelerometers to measure wheel vibration. It then sends a canceling signal through the stereo’s 35 speakers (including a pair in each of the four main cabin headrests) to zero out any tire or engine noise that might disturb your journey.

It works so well that wind noise ends up much more noticeable. It feels like driving an EV, but the effect is remarkable at lower speeds when the wind is less of an issue. The Land Rover engineers were very proud of this system but admitted that wind noise was a tougher nut to crack because physics is a fickle beast. Still, I’m all for it.

Though I was in the long-wheelbase version, which adds an extra eight inches mostly in rear-seat legroom, the rear-wheel steering made quick work of spirited driving down some Napa Valley backroads. Not many Range Rover owners will attempt the grassy hill climbs we successfully conquered, but rest assured that your Range Rover is more than capable, even with its absurd 23-inch Pirelli street tires.

It can ford nearly 3 feet of water and even has a special Wading mode that uses ultrasonic parking sensors to determine the water depth. There’s also a new Air Quality feature that measures PM2.5 fine particles both inside and outside of the car, and it’ll make recommendations on whether you should wear a mask inside or out. This is clearly aimed at the Chinese market, but it’s nice to know whether the air you’re breathing is clean or not.

Aside from the stunning wood and leather, which is plentiful, a 13.1-inch screen running the latest Pivi Pro infotainment system sits prominently in the middle of the dash. It supports wireless Apple CarPlay and Android Auto and a wide variety of apps and modes. The Terrain Response offroad system is managed here, and it supports Amazon Alexa, too, so you can open your front gate by yelling at your car.

And if you’re feeling a bit stressed, have no fear because a hot stone massage function is available to help soothe your tensions away — and yes, it works, and it’s spectacular. There’s an active signal booster that allows your cell phone to get better reception inside the car. The ultraluxe SV edition even has a gear shifter and rotary controls made of ceramic, which is outrageously decadent.

There isn’t enough space to get through all the techs and specs of the new Range Rover. If I bought one, I think I’d still be finding new features a year or two into my ownership.

A plug-in hybrid version is coming later this year, which I’m very excited to try and could get as much as 60 miles of all-electric range from its 31.8 kWh usable battery. And a full-electric Range Rover is on the way.

For years, the Range Rover has been the best way to explore the world in style (as long as you didn’t own it for too long), and the new one takes that to dizzying new heights. Rebecca Welton would be thrilled with this new beast, and if you’re the type to drive yourself around, you will be too.

The rear of the Range Rover SV is packed with as much jaw-dropping luxury as the front. At the tap of a screen, motorized cupholders appear from nowhere and a door you didn’t realize was there opens to reveal a refrigerator with two chilled glasses and room for your favorite libation inside.

The outrageously comfortable rear seats are also heated and ventilated, but also include a wide variety of massage modes including a “hot stone” massage that works as advertised.

But my favorite is the table with an illuminated, 3D-printed stand that rises from the center console. Large enough for even the most ambitious drive-thru visit, the table (and the rest of the over-the-top features back here) is the brainchild of Land Rover’s Special Vehicle Operations group, the skunkworks responsible for the Range Rover SV.

It’s all wildly unnecessary, but you’ll never tire of showing your friends all the neat things your new SUV can do that theirs cannot. And showing off isn’t really something you can put a price on.

Land Rover covered the travel and lodging to review the Range Rover on location, as is common practice in the auto industry. Automakers or their affiliates have no oversight when it comes to Inverse editorial content, which remains wholly independent and from the brain of our extremely opinionated car analyst and critic, Jordan Golson.

On the wonderful television show Ted Lasso, AFC Richmond owner Rebecca Welton is regularly chauffeured around in a Rolls-Royce Phantom. The cars of Ted Lasso, as with just about everything else on the Apple TV+ show, are perfectly cast. The wise-beyond-his-years footballer Sam Obisanya drives a Tesla, while the insecure Colin (mantra: “I am a…

On the wonderful television show Ted Lasso, AFC Richmond owner Rebecca Welton is regularly chauffeured around in a Rolls-Royce Phantom. The cars of Ted Lasso, as with just about everything else on the Apple TV+ show, are perfectly cast. The wise-beyond-his-years footballer Sam Obisanya drives a Tesla, while the insecure Colin (mantra: “I am a…