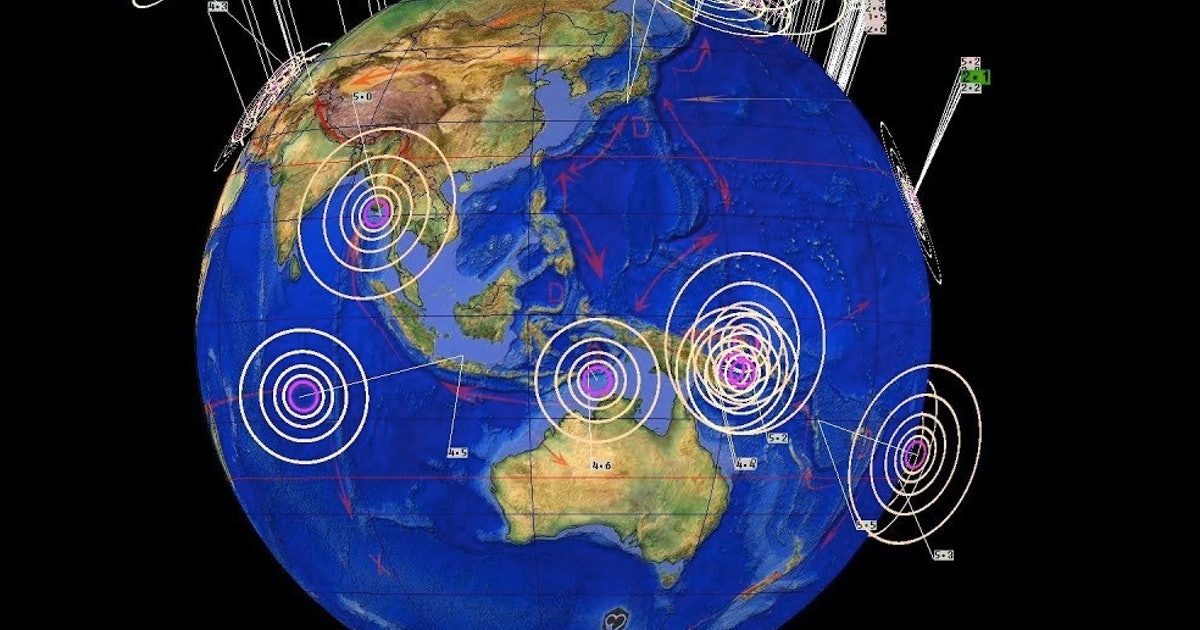 In 1990, an eccentric Texan named Iben Browning appeared on the national stage with a dramatic prediction: On December 2 or 3 of that year, a major earthquake would hit the New Madrid fault in southwestern Missouri.

Professional earthquake scientists mostly declined to even give the prediction any attention, and — to their total lack of surprise — Dec. 3, 1990 came and went without a tremor. Nevertheless, Browning’s prediction sent a number of people into a panic, who built “Browning bunkers” and brought news crews to the small town of New Madrid (pronounced in a typically American fashion as “MAD-rid”). The non-event even inspired a 1993 song from the southern Illinois alternative country band Uncle Tupelo.

On its face, predicting an earthquake in New Madrid doesn’t seem too far-fetched. On Dec. 16, 1811, a tremor struck the town large enough to change the course of the Mississippi River and create the illusion of making the water flow backward. The young city of St. Louis was heavily damaged, and New Madrid itself was essentially destroyed. The New Madrid region even experienced a magnitude 4.7 quake in September 1990, which lent a little credibility to Browning’s claim in the public eye. The area has around 200 low-magnitude quakes annually, and disaster-preparedness experts are concerned that infrastructure is not robust enough to handle larger events.

But knowing earthquakes have happened at a particular site and are likely to happen again in the future is not the same thing as being able to predict them. Browning based his “forecast” on weather patterns and other phenomena, but never fully revealed his methodology for others to evaluate. (His primary motivation may in fact have been selling videocassettes explaining his theories to a panicked population.)

Browning died shortly after the New Madrid debacle, but today, social media sports a number of his amateur earthquake-prediction heirs. Some of these are conspiracy theorists who think quakes are actually caused by nefarious forces covered up by governments. Others believe they have uncovered deep physical secrets about how the Earth operates that mainstream scientists are just too hidebound to accept.

One thing they all have in common, though: They can’t do what they claim they’re doing. Just like the myth of “earthquake weather,” earthquake predictions have no basis in reality.

“It would be amazing if we could predict earthquakes in a useful way.”

No earthquake forecaster has ever been able to predict the place, time, and strength of tremors, which makes them useless at best for disaster preparation. At worst, the predictors feed into the same culture of conspiracy and distrust that sustains dangerous movements like QAnon. And whatever the motivation, claiming to predict an earthquake can lead others to panic or make life more difficult for government services during actual disasters.

“It would be amazing if we could predict earthquakes in a useful way,” CalTech geologist Celeste Labedz tells Inverse. “It would be awesome from a human perspective and also from a scientific perspective, but there’s a bunch of things that make it hard. Earthquakes [start] way underground. Even if you knew everything about the spot underground where an earthquake was going to happen, it’s still not a guarantee that you could predict it.”

With seismologists unwilling to make specific forecasts, amateur scientists are stepping in — and they aren’t bound by the rules of ordinary scientific discourse. They don’t have to have their publications peer-reviewed by experts or compete for government grants. Instead, they take their predictions directly to the public via YouTube, Twitter, Facebook, Twitch, and other social media.

Michael Janitch, who regularly posts under the name “dutchsinse,” is one of the most popular earthquake predictors. As an affiliate on the Amazon-owned streaming platform Twitch, he posts videos regularly and gets paid to do it. Before YouTube and Facebook cracked down on conspiracy content, Janitch used both of those sites extensively as well (his YouTube is still active). He boasts over a half-million subscribers on various services, and his comment sections are full of people praising him, offering prayers for his health, and asking his advice about disaster preparedness.

However close-knit the dutchsinse community is, the content of Janitch’s videos is a mishmash of scientific-sounding language and conspiracy-mongering. Common themes include “directed energy weapons” being used by nefarious forces to cause earthquakes and wildfires, as well as regular accusations that the United States Geological Survey (USGS, which monitors seismic activity) suppresses information about quakes.

In non-earthquake content, Janitch has implied Covid-19 vaccines are part of a sinister plot, writing on his website, “I’m not taking the vaccine, my wife won’t be doing that either.. neither will my marine [sic] buddies. So.. I’m on board with not complying.” He recently scrubbed his Twitter account of all tweets, but in the past, he openly supported the QAnon conspiracy theory that (among other things) claims high-ranking Democrats and Hollywood actors ritually abuse and murder children.

Janitch has created his own visualization model for earthquake prediction and uses scientific-sounding language to describe his methodology. As a result, it’s easy to see why some people think he’s authoritative: He uses visual metaphors and maps to explain what he’s doing, and without additional knowledge from specialized training, it would be challenging to understand why his predictions are nonsense. He also provides explanations for why his forecasts don’t match what establishment seismologists say, either by invoking his conspiracy theories or by implying he understands the science better than scientists do.

Another way Janitch and other conspiracy-minded predictors preserve the appearance of independence is by making themselves difficult to reach. Dutchsinse has no contact email listed, nor does he reply to Facebook requests for comment. His Twitter DMs are closed, too (the only account he follows is Elon Musk). On Instagram, he shares selfies, scenic nature photos, and pictures of cute cats.

By contrast, earthquake-predictor Luke Holmquist is eager to talk to media and doesn’t bring up right-wing conspiracies in conversation. He goes out of his way to mention that he reads popular books by seismologists, even though they all warn it isn’t possible to do what he claims to do.

“I think humility is the only way you can accept new ideas,” he tells Inverse, which is a genuinely useful scientific attitude. At the same time, Holmquist espouses theories about earthquakes that have been long debunked, such as the idea that mass ejections from the sun add enough mass to Earth to increase its size. (To be clear, while the sun does eject a lot of material that ends up hitting our planet, all of it still amounts to a tiny fraction of Earth’s actual mass.)

Getting it right, sort of

Holmquist, unlike Janitch, also admits his models are not perfect.

“I’m doing real good with the time, like the date, time, and location,” he says. “The difficult part is the magnitude.”

Again, this sounds reasonable on its face, but failing to predict magnitude actually makes the forecast useless. When a given region like Southern California literally has quakes happening all the time, it’s easy to “predict” an event (especially if your margin of error is a day or two), but without nailing the magnitude, the forecasters haven’t actually predicted anything at all.

“The difficult part is the magnitude.”

If you predict a tremor on a particular day, but warn of a magnitude 6.5 shake when a 3.5 quake was actually what happened, your forecast was off by a substantial amount. (A magnitude 7 quake shakes the ground 10 times harder than a magnitude 6 quake, which means a 6.5 quake is a thousand times larger than a 3.5 quake.) The infamous 1906 San Francisco earthquake that destroyed much of the city was probably around magnitude 7.9, while the quake that struck Chile in 1960 was a breathtaking magnitude 9.5. A magnitude 3.5 quake is barely noticeable.

“An earthquake actually happens over an area,” she says. “Maps shown on the news usually place a single star where the ground began to shake, but the real motion is often spread out with the tremor strength varying a lot over that area.”

In movies, the isolated scientific genius is usually right (think Doc Brown in Back to the Future or Jeff Goldblum’s character in Independence Day), while mainstream scientists are at best wrong and at worst part of a conspiracy to cover up the truth. In real life, this is almost never the case. Even iconoclastic scientists like Galileo or Einstein worked within the establishment and were well-regarded in their lifetimes. Similarly, real-world conspiracies are at once less exciting and higher-stakes than their fictional counterparts.

Frankly, most of the videos from Janitch, Holmquist, and others are not terribly interesting. YouTube and Twitch both prefer viewers who watch long videos, which maximize time spent on the sites and the frequency of ad breaks. A dutchsinse YouTube video can run as long as two hours, much of which is Janitch showing low-resolution animations that zoom dizzily in and out, accompanied by unpolished commentary. Holmquist, by contrast, usually shows his face and strikes a friendly weatherman attitude.

But whether they strike a conspiratorial tone or a friendly one, whether (like forecaster Brent Dmitruk) they write grim fiction about disasters they “predict,” they fundamentally have the same issue: They’re wrong. When someone forecasts something and others believe them, they can cause a panic, as happened with Browning’s 1990 prediction. Holmquist’s warnings of earthquakes have gone viral on social media often enough for multiple official websites to caution people against believing him.

Geologists have gotten much better at characterizing risks, understanding aftershocks (the tremors that follow the initial quake), and knowing how they connect to plate tectonics and even human activity like wastewater injection from fossil-fuel extraction. Scientific earthquake forecasting may be possible in the future, but expect it to come from professional seismologists, not YouTube personalities.

In 1990, an eccentric Texan named Iben Browning appeared on the national stage with a dramatic prediction: On December 2 or 3 of that year, a major earthquake would hit the New Madrid fault in southwestern Missouri. Professional earthquake scientists mostly declined to even give the prediction any attention, and — to their total lack…

In 1990, an eccentric Texan named Iben Browning appeared on the national stage with a dramatic prediction: On December 2 or 3 of that year, a major earthquake would hit the New Madrid fault in southwestern Missouri. Professional earthquake scientists mostly declined to even give the prediction any attention, and — to their total lack…