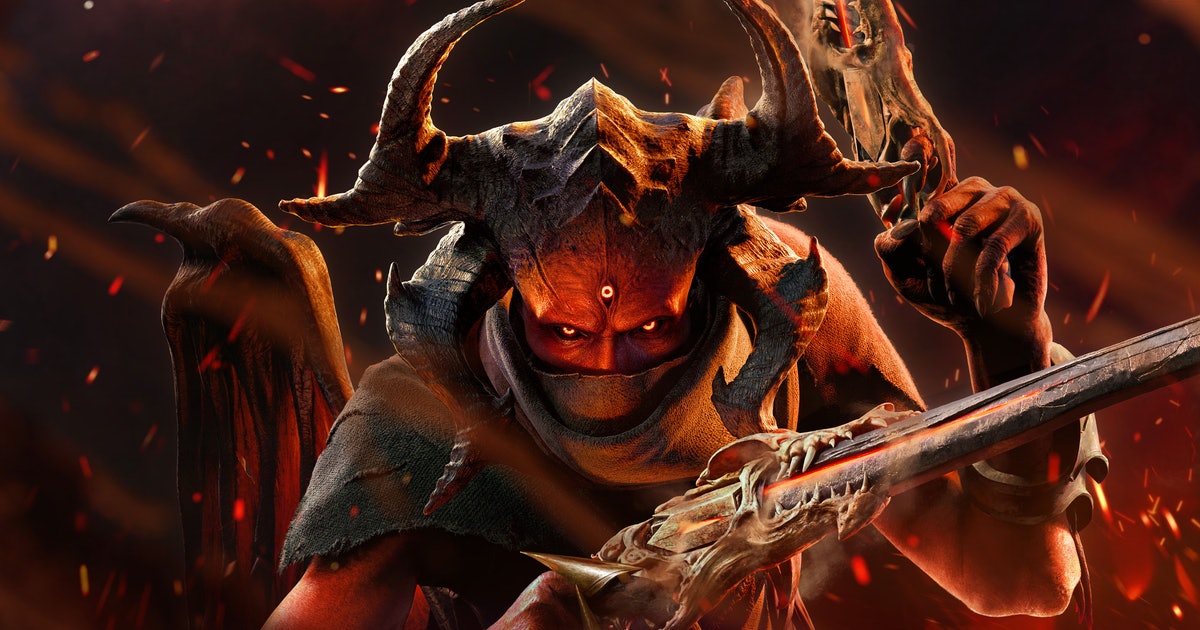 A rhythmic FPS for Doom-loving metalheads

Wielding a shotgun from hell known as Persephone, I blast my way through wave after wave of demons in Metal: Hellsinger.

The consistent pulse of the melodic guitar riff with accompanying guttural vocals serves as the driving force that keeps me going, the tempo that keeps my combo intact. Then, an ill-timed demon swipe knocks me off a ledge. Rather than plunge to my death, I spread my wings and zip back to the platform before decimating the creature standing in the way. One shot, then another, then one more — all in sync to the beat of the song.

It helps that I’m a demon too.

Metal: Hellsinger is a first-person rhythm-based shooter with an emphasis on metal music. The moment-to-moment gameplay feels a lot like a fast-paced FPS, with Doom being an obvious comparison, but you deal more damage with a combo multiplier if you shoot your enemies to the song’s beat. This adds an extra layer of depth that requires precise timing, amplifying the significance of the song being played.

Ahead of its release later in 2022, developer The Outsiders invited Inverse to try a preview build of Metal: Hellsinger, featuring the tutorial and first level of the game. While this is only a bite-sized taste of what the full version will offer, it touches upon the unique mechanics while highlighting a badass performance by Two Feathers, featuring Alissa White-Gluz of Swedish melodic death metal band Arch Enemy.

Walk with Me in Hell

Metal: Hellsinger throws you right into the deep end: a gorgeous, albeit frightening section of hell known as Stygia. The song that plays during this section is absurd, with a catchy, symphonic guitar riff that balances nicely alongside White-Gluz’s vocals. She sounds like a demon, which is fitting for this context.

The FPS mechanics work as you’d expect, but on either side of the crosshairs are pulsating icons that match up with the rhythm of the song. If you shoot when those icons align with the crosshairs, you’ll deal more damage and gain a multiplier bonus. Do it again and your multiplier will increase, adding to your score. This point system allows you to gauge how well you performed on a specific level while encouraging you to replay to get better. Even with just having access to one short level, I found myself constantly replaying it to beat my previous score, making it hard to put down.

There will be a variety of weapons in the final build, but the demo offered access to the Persephone shotgun, The Hounds dual revolvers, a sword, and the Paz, which is a skull that shoots fireballs. While The Hounds were super-effective in many situations, I found myself gravitating towards the Persephone, especially since the placement of a well-timed shot made it sound incredible alongside the music. The crunch of each blast connecting with a demon makes the shotgun feel like an instrument in and of itself.

Metal: Hellsinger takes the familiar FPS gameplay we’ve grown accustomed to in recent years, but ultimately turns it on its head thanks to the rhythm mechanics. A player can no longer rely on aimlessly shooting to get through a stage. It’s a match made in hell that really works.

Into the Mouth of Hell We March

Rather than spam the fire button, you have to drift into a zen-like state of flow, only shooting when it makes sense to, musically. Not only are you encouraged to shoot along with the music to ensure the song sounds great, but you also deal far more damage when lined up with the track. The enemies in the demo are challenging enough that you have to be as accurate as possible with the timing of each shot. Otherwise, the gunfights would easily become overwhelming.

Then, when the final boss of the stage was thrown at me, I felt prepared. This particular segment was the most challenging of all: Not only did I have to dish out gunshots timed to the music, but I had to jump and dodge rows of fireballs like a bullet-hell shooter. This test of skill was the perfect sendoff to a powerful experience, feeling like the explosive marriage of powerful game mechanics and equally as effective music.

In many ways, Metal: Hellsinger is a metalhead’s dream, not just due to the imagery and subject matter, but in the way that it highlights famous musicians from bands many fans have been listening to for 20 or more years.

These are vocalists such as Serj Tankian of System of a Down, Matt Heafy of Trivium, Randy Blythe of Lamb of God, the aforementioned Alissa White-Gluz of Arch Enemy, and one of my all-time favorites, Tatiana Shmailyuk of Jinjer.

It’s unclear if more musicians will be added further on, but as it stands, it’s a packed lineup of fan-favorites, lending their voices to original songs that absolutely shred. Based on this demo alone, Metal: Hellsinger could very well be one of the most original games of 2022. Sure, it’s targeting a niche audience, but the gameplay is solid enough that even non-metal fans should find plenty to enjoy, while metalheads will feel at home with this game, thanks to the love and care put into it.

Wielding a shotgun from hell known as Persephone, I blast my way through wave after wave of demons in Metal: Hellsinger. The consistent pulse of the melodic guitar riff with accompanying guttural vocals serves as the driving force that keeps me going, the tempo that keeps my combo intact. Then, an ill-timed demon swipe knocks…

Wielding a shotgun from hell known as Persephone, I blast my way through wave after wave of demons in Metal: Hellsinger. The consistent pulse of the melodic guitar riff with accompanying guttural vocals serves as the driving force that keeps me going, the tempo that keeps my combo intact. Then, an ill-timed demon swipe knocks…