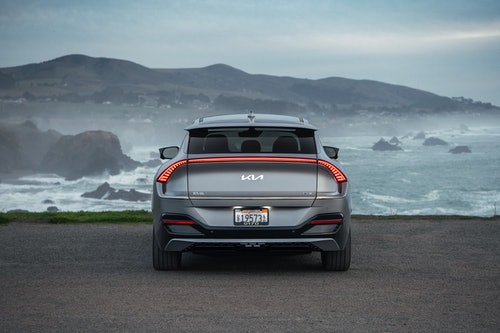 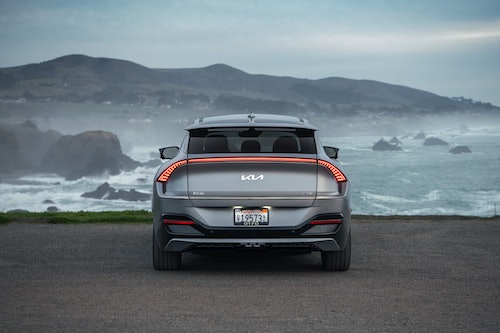 Electric cars, aside from some of those made by Tesla, haven’t been the most exciting vehicles on the market.

That’s a problem because as much as people like sensibility and good fuel economy, many car purchases are made with the heart rather than the brain.

Car dealers know this, which is why Chevy dealers always have a gorgeous new sports car sitting front-and-center when you walk in. Some guy (or gal), who has secretly always wanted a little red Corvette, will come in looking for a new Tahoe or something and walk out with a brand new drop-top simply because it was there. 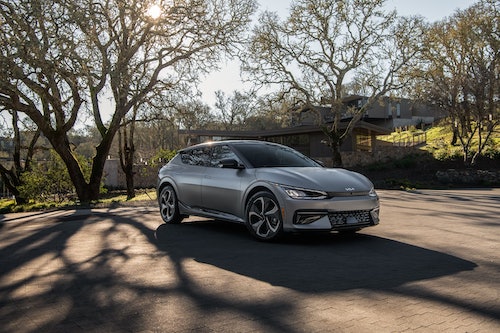 The Nissan Leaf is a fine automobile, well suited to picking up groceries or getting you to and from the office. But it doesn’t stir passion outside of its vocal but diminutive ownership. The Kia Niro EV is a great little electric crossover, but it’s far from exciting.

However, this practicality-first approach is getting tossed aside in favor of the tried-and-true automotive method of bigger, better, and bester.

The new GMC Hummer EV pickup is a 9,000-pound monument to excess, living up to the Hummer nameplate and sticking a thumb in the eye of environmentalists by taking sensible batteries and electric motors and using them to drive sideways up a cliff.

And thank goodness, because electric cars can be incredibly fun. With instant torque and a low center of gravity, cars like this week’s tester — the Kia EV6 — are a joy to behold and drive. 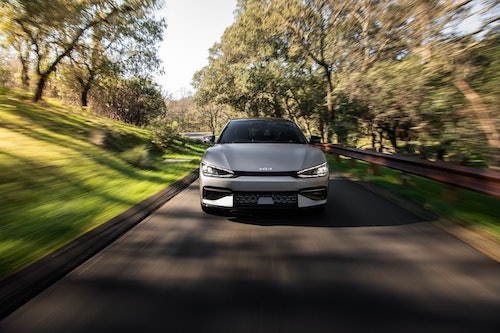 Mine was a rear-drive version with a single electric motor making 225 hp and 258 lb-ft of torque. The dual-motor all-wheel-drive version makes 320 hp and 446 lb-ft, so I was afraid I’d have the pokey, slow version. Oh, how wrong I was.

There are certainly faster versions of the EV6, including an upcoming EV6 GT that will make 576 hp — but this one was the epitome of a hot hatch, and I’d easily take it over a Volkswagen GTI.

With wheels pushed far out to the car’s corners, the EV6 handled like a go-kart. The 77.4 kWh battery pack, good for 310 miles of EPA-estimated range, sits low beneath your feet, good both for performance and overall storage in the car.

There isn’t so much power that you can’t plant your right foot and scamper away from a red light, and goosing it up an on-ramp gets you onto the highway in a flash but not at such prodigious speeds that you need to stomp on the brakes when you get there. 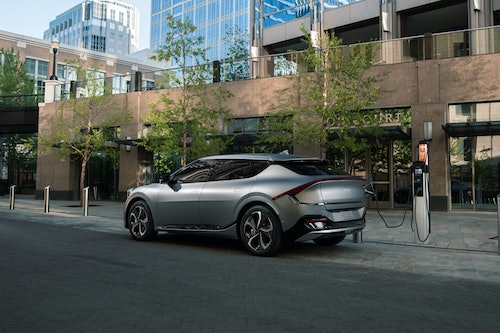 The most impressive part of the EV6 is the charging. I was able to fill the battery from 10 to 80 percent in just 18 minutes at a 350 kWh Electrify America DC fast charger, spot on with what Kia claims. That’s more than 200 miles in less than 20 minutes, twice as fast as similarly-priced competitors like the Ford Mustang Mach-E and Volkswagen ID.4.

An 18-minute fast-charge stop is not far off what you’d spend at a typical gas station on a road trip, between pumping gas, hitting the restroom, and deciding which can of Pringles you want.

Kia swears that the EV6 is an SUV or a crossover or some such, but that’s nonsense. This, like its corporate sibling, the Hyundai Ioniq 5, is a hatchback to those who know and a "crossover" to those who think hatchbacks are boring.

The outside is swoopy and slippery, and the Steel Matte Gray paint was stunning. Usually, matte paint is reserved for ultra-pricey luxury cars, but thank goodness they put it here. More cars need matte paint. 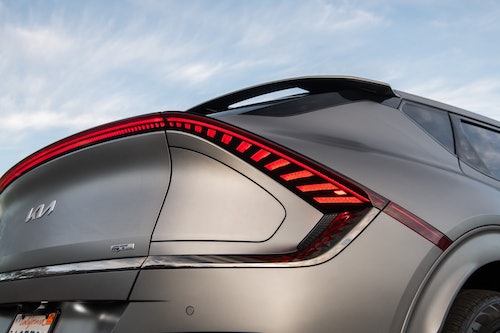 The interior is much more traditional than the wide-open design in the Hyundai Ioniq 5. There’s a gap between the floating center console and the dashboard, giving access to a large storage bin on the floor between the driver’s and passenger’s feet.

This is a striking design difference from the Ioniq 5, and if you put the two side-by-side, I suspect you’ll have strong feelings one way or the other. As is often the case with design, the better interior is solely in the eye of the beholder — or, perhaps more likely these days, the better one is whichever one you can find to buy.

The interior is a bit tight for my liking, however. The seat feels too high, which gives an SUV-style upright leg position, but my head was just a bit too close to the ceiling. I didn’t actually touch the roof, but it was awfully close. I’d make sure to find an EV6 to sit in before you buy it. 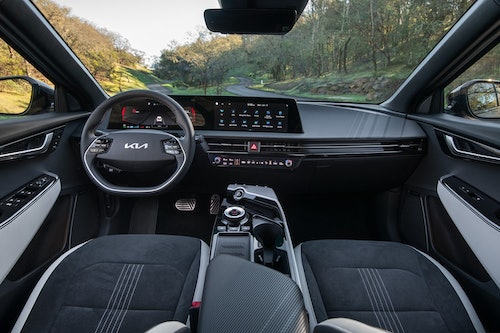 My EV6 GT-Line RWD priced out to $53,405, and it’s eligible for a $7,500 federal tax credit. Lower-priced versions are available, including one with a smaller battery starting around $43,000.

I liked the Ford Mustang Mach-E, and I’ve long-recommended the Tesla Model 3 and Y solely on the back of the Tesla Supercharger network. But now, the Kia EV6 and Hyundai Ioniq 5 get my wholehearted recommendation on the back of incredibly high-speed charging and excellent driving experience.

It might not be an electric red Corvette, but EVs are finally tugging on heartstrings. 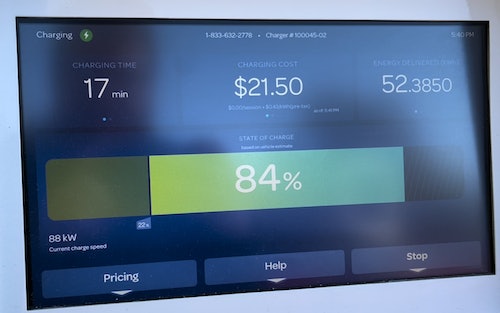 At the risk of beating this topic to death, this is a fast-charging session screen from an Electrify America charger. There are a few things of note here.

For one, the EV6 is at 84 percent battery state of charge and is still charging at 88 kW, showing how aggressive the charge curve is. A Ford Mustang Mach-E charges at around half that speed over 80 percent state of charge.

It took just 17 minutes to take the EV6’s battery from 22 percent to 84 percent, thanks to a brand new 350 kW Electrify America charger. At around 4 miles per kWh, that’s more than 200 miles of range in just over a quarter-hour. Most impressive.

Electric cars, aside from some of those made by Tesla, haven’t been the most exciting vehicles on the market. That’s a problem because as much as people like sensibility and good fuel economy, many car purchases are made with the heart rather than the brain. Car dealers know this, which is why Chevy dealers always…

Electric cars, aside from some of those made by Tesla, haven’t been the most exciting vehicles on the market. That’s a problem because as much as people like sensibility and good fuel economy, many car purchases are made with the heart rather than the brain. Car dealers know this, which is why Chevy dealers always…

2022 Ford Maverick price, specs, and how to buy the hottest pickup on the market

Star Trek delivers the best show for a new generation