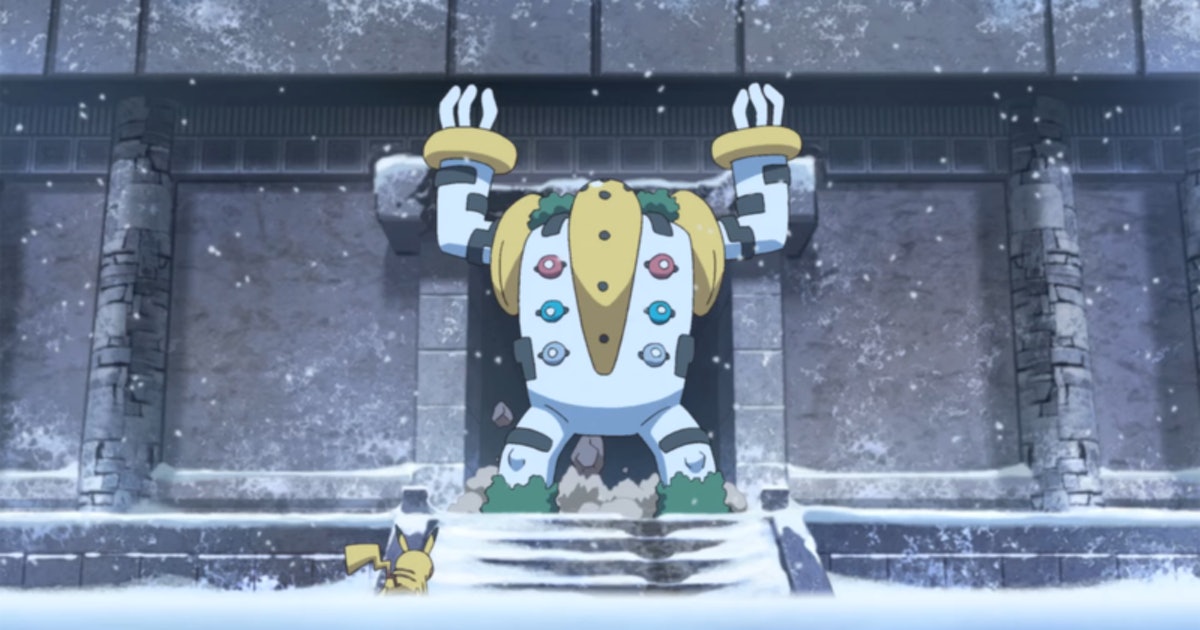 How to get Regigigas in ‘Pokémon: Crown Tundra’

Regirock, Registeel, Regice, Regidrago, and Regieleki should all be familiar Legendary Pokémon to anyone who has played Pokémon Sword and Shield’s The Crown Tundra expansion. While all the “Regis” are powerful in their own right, Regigigas lords over them all. One of the final late-game rewards that players can come across in The Crown Tundra.

If you want to get your hands on a Regigigas, the process is a bit more convoluted when compared to catching other Legendary Pokémon in Pokémon Sword and Shield.

Here’s what you need to do.

Regigigas is a very powerful Legendary first introduced in Pokémon Diamond and Pearl, but it does come with one terrible catch. Its ability, Slow Start, halves Regigigas’ attack and speed for the first five turns of every battle, with the timer being reset if Regigigas is switched out.

While this Legendary Pokémon has some great stats, it’s tough to use competitively and even in-game sometimes because of the massive disadvantage from its exclusive ability. If this ability doesn’t bother you, players can obtain a Regigas in The Crown Tundra in 3 simple steps.

The first thing that you’ll need to get is every other “Regi” legendary Pokémon in The Crown Tundra. By playing the story, you will get four of these Pokémon after Peony tasks the player with tracking them down as part of the Legendary Clue 2 mission. You can find four shrines containing these Pokémon around the area.

It’s impossible to get all five of these Pokémon on just one save file. It’s relatively easy to acquire Regirock, Regice, and Registeel, but the DLC makes you choose between getting Regidrago or Regieleki, which are new Legendary Pokémon from Galar. Depending on which pattern you put into the shrine in Three Point Pass, you’ll either get Regidrago or Regieleki. To get the other one, you’ll have to trade Pokémon with someone who also has The Crown Tundra.

As such, this prerequisite is nearly impossible to complete without using Pokémon Home or trading. At that point, you might as well just transfer the ones you have in other games. That said, if you have a friend with The Crown Tundra, make sure that they get the Legendary that you did not get so you can trade back and forth to each get Regigigas.

Step 2: Go to a specific Pokémon Den in Giant’s Bed

Once you have all of the other Regis together in one file, you can now take the next step to get Regigigas. You’ll need to go to Giant’s Bed, a large area in the middle of the Crown Tundra that you’ll have visited quite often over the course of the expansion.

You’ll then need to find one specific Pokémon Den in that area that is surrounded by four rocks and has a view of Dyna Tree Hill. While this Pokémon Den usually doesn’t glow red like the others, if you go up to it with Regirock, Registeel, Regice, Regidrago, and Regielek in your party, you can fight Regigigas. You’ll have to take it on with just these Pokémon, so make sure they all have full health and movesets that you are happy with beforehand.

Step 3: Beat Regigigas and catch it

Now that the fight is on, you’ll have your chance to beat Regigias. It’s a level 100 Legendary, so it’s pretty tough to take down even with that Slow Start ability. As a Normal-type Pokémon, Fighting-type moves will do super-effective damage to it. While the battle is quite tough, you can catch Regigigas at the end of the fight.

It’s a guaranteed capture no matter what Pokéball you use, so make sure you don’t waste your Master Ball on it. After this, you’ll have a level 100 Regigigas at your disposal, though there isn’t much else to do in the endgame at this point. You could transfer it to a new file and get off to a great start, though there are also easier ways to get Legendary Pokémon on your team in The Crown Tundra.

Pokémon Sword and Shield: The Crown Tundra is available now for Nintendo Switch.

Regirock, Registeel, Regice, Regidrago, and Regieleki should all be familiar Legendary Pokémon to anyone who has played Pokémon Sword and Shield’s The Crown Tundra expansion. While all the “Regis” are powerful in their own right, Regigigas lords over them all. One of the final late-game rewards that players can come across in The Crown Tundra.…

Regirock, Registeel, Regice, Regidrago, and Regieleki should all be familiar Legendary Pokémon to anyone who has played Pokémon Sword and Shield’s The Crown Tundra expansion. While all the “Regis” are powerful in their own right, Regigigas lords over them all. One of the final late-game rewards that players can come across in The Crown Tundra.…