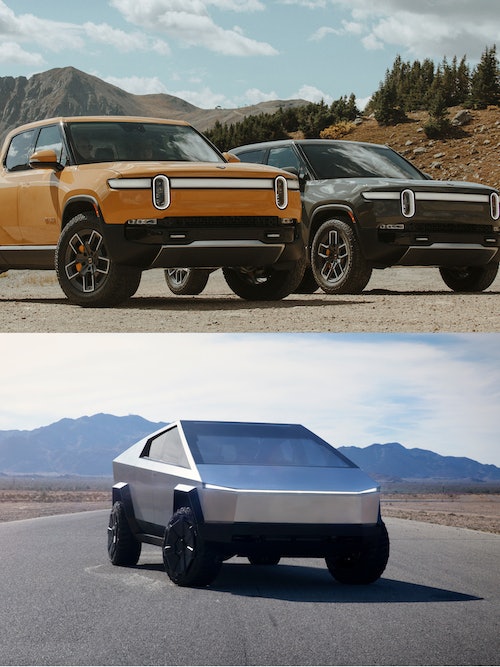 Just about every new electric vehicle maker is heralded as the “next Tesla,” but perhaps the most deserving contender is Rivian. A sleek startup that builds only EV trucks and SUVs and is backed by major investments and partnerships from corporations like Amazon, Rivian has finally begun production of its long-awaited all-electric pickup truck, the R1T. (It also makes an SUV on the same platform called R1S).

Although the R1T carries some seriously futuristic bells and whistles, it holds true to the basic cab-and-box shape that has defined the pickup truck for a century. The same cannot be said for Tesla’s own entry into the EV truck race, the warlike, exceedingly pointy, all-stainless-steel Cybertruck. 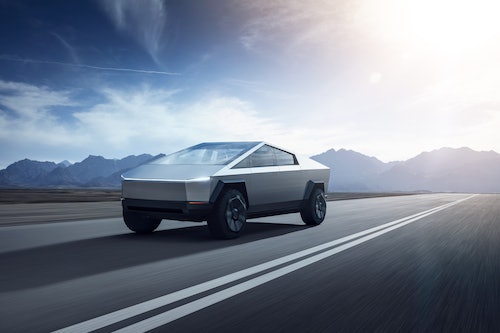 Because Rivian offers no models that can compete on price with single- or dual-motor Tesla, the logical comparison is between the R1T and the top-of-the-line $70,000 Cybertruck. The most affordable R1T — with an ordinary 260-mile range and dual motors — won’t begin delivery until 2024.

So, I built a Rivian I could get my hands on much sooner, which includes the quad-motor package and 314-mile large battery pack. Those additions bump the starting price to $79,500.

Tesla’s Cybertruck website does not allow potential buyers to build and customize their vehicles at this time, so we’ll have to go with the standard specifications of the tri-motor Cybertruck for this comparison. 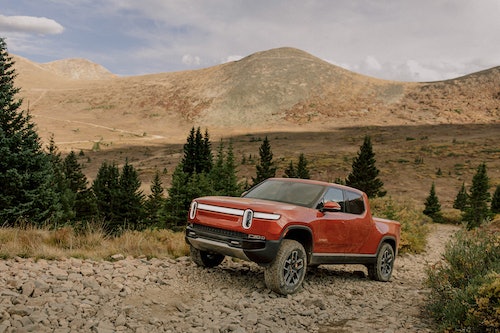 When it comes to price, there’s little competition. Rivan may build smaller, more affordable trucks in the future once the company has a more solid footing in sales and production, but for now, its offerings can’t compete with Tesla’s on price.

Throwing in additional features can blast R1T’s cost into the stratosphere. If you opt for the deluxe Adventure package of technology and design features, choose the quad-motor all-wheel drive, and pick the Max pack’s 400-mile range, then the Rivian’s cost reaches $95,000.

Now, there are two important notes about price: Rivians remain eligible for the full $7,500 federal tax credit for buyers. Tesla’s tax credit has entirely phased out. And Tesla charges $10,000 for “Full-Self Driving,” which is supposed to let the vehicle drive itself entirely once the technology and the law allows. These factors help to close the price gap between Cybertruck and R1T. 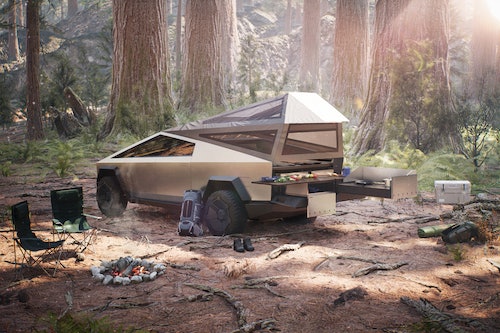 Advantage Tesla. With its cheaper Cybertruck variants, Tesla offers more range for your buck. The entry-level Cybertuck claims 250 miles on its battery. That’s just 10 less than the base R1T, which costs $27,000 more.

With 500 miles of range, the tri-motor, $70,000 Tesla Cybertruck nearly doubles the range Rivian offers in the similarly-priced base R1T. And the top-of-the-line Rivian that runs you nearly $100,000 reaches only 400 miles. 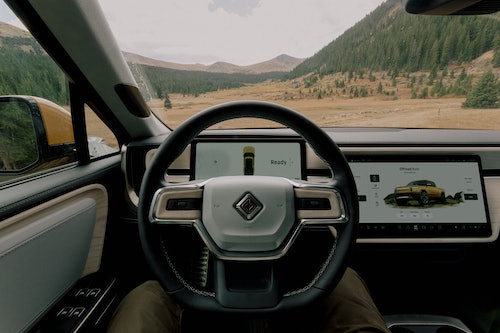 Rivian earns a slight edge over the less-expensive Teslas here, claiming that the R1T tows 11,000 pounds compared to 7,500 and 10,000 pounds for the single- and double-motor Cybertrucks, respectively.

Once again, though, the juggernaut tri-motor Cybertruck crashes in with eye-popping specs, claiming 14,000 pounds of towing capacity. However, because R1Ts are just starting to be delivered and Cybertrucks won’t be out until 2023, we’ll need to wait and see real-world results about how badly heavy towing drains the batteries of these trucks. 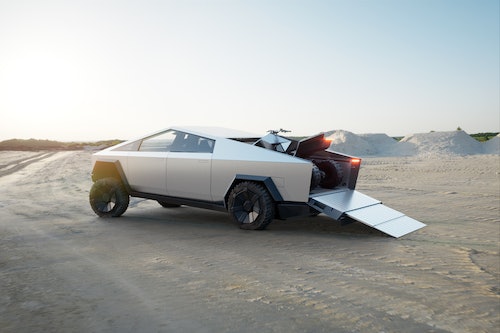 Tesla has the edge here, with 3,500 pounds of maximum payload for all three versions of the Cybertruck. Rivian claims less than 2,000 pounds.

What is traditionally known as the truck bed, Tesla calls the “vault.” The Cybertruck’s vault can be closed off to improve the truck’s fuel economy by closing a shutter-style top. The vault measures 6.5 feet long.

With its tailgate up, R1T’s bed measures only 4.5 feet long, which also can be enclosed by an optional cover. Rivian compensates for this shortcoming with a gooseneck tailgate that elongates the bed to nearly seven feet.

The R1T is shorter overall, with a wheelbase of 135.8 inches. Cybertruck is nearly a foot longer at 149.9 inches. 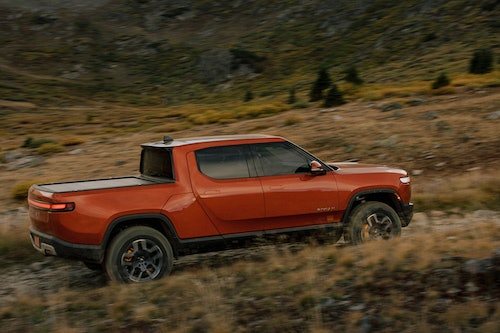 Rivian says the R1T has 314 liters of cargo capacity under the hood, in the space where engines used to be. That’s less than what you’ll find in some EV trucks, like the Ford F-150 Lightning. However, a recent Rivian Instagram story helpfully points out other storage spaces tucked throughout the truck, including a storage compartment under the second-row seats as well as the Gear Tunnel, a 65-inch-wide tunnel that runs horizontally across the truck just in front of the rear wheels.

Tesla has yet to release an exact volume for the Cybertruck’s frunk.

As is Tesla’s trademark look, the Cybertruck’s spartan interior has few physical buttons and levers, just a yoke in place of the traditional steering wheel and a 17-inch touchscreen display. Rivian, too, followed the minimalist aesthetic that favors screens over buttons. The main difference is that R1T has a second screen as a dashboard cluster, whereas Cybertruck features only the large center touchscreen and nothing directly in front of the driver. 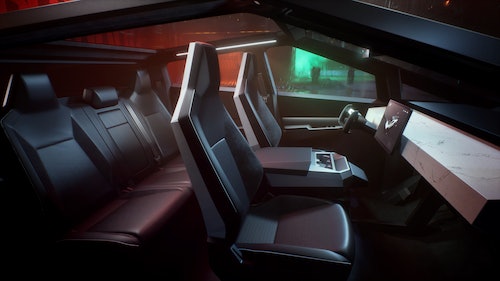 R1T’s price includes a black interior, while a lighter “Ocean Coast” runs an additional $1,500. Tesla’s configuration tool is no longer live for the Cybertruck, but its other models follow the same pattern as Rivian: All Black is the included default, while a Black and White interior costs an additional grand.

The Rivian includes an excellent stereo by Meridian. The specifics of Tesla’s audio system are not yet available. 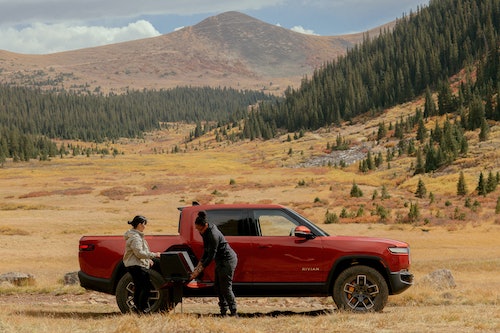 Both of these rugged EVs are built to leave the pavement. Cybertruck’s dystopian looks help it to achieve impressive numbers off-road, with up to 16 inches of ground clearance plus a 35-degree approach angle and 28-degree departure angle.

Maximum wading depth is not specified, but CEO Elon Musk has tweeted that the truck will be able to drive through streams and “even float for a while.” 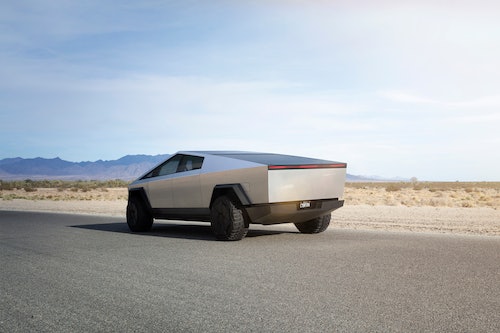 Rivian tops Tesla in the departure angle department, and it offers a host of additional features to make the truck even more capable in the dirt and muck. An extra $2,000 buys you the Reinforced Underbody Shield, which Rivian claims is “engineered to absorb, deflect and distribute impacts in extreme off-road conditions.” You can also pay $2,500-3,500 more to swap the included 21-inch road tires for your choice of 20-inch all-terrain tires.

Cybertuck will come with Tesla’s Autopilot, a driver assist system that keeps the truck within its lane of traffic and will automatically brake or accelerate within that lane depending upon the flow of traffic. Tesla offers a $10,000 “Full-Self Driving” upgrade, which, Tesla promises, will allow the truck to drive itself entirely at some point in the not-too-distant future.

Rivian’s driver assist system is called Driver+. It will steer and adjust speed automatically, but is not a full self-driving system and requires the human to keep their hands on the wheel and be ready to assume control. Like pretty much all current luxe vehicles, the Rivian offers adaptive cruise control, lane-keeping assist, blind-spot warning, rear-cross traffic alert, automatic emergency braking, automatic high beams, and other advanced safety features.

The Cybertruck claims a few fun and unusual features such as the ability to float and its bulletproof windows. But its key advantage may be Tesla’s sprawling network of proprietary Supercharger stations. Rivian promises to build out a network of its own, but Tesla has a decade of a head start here.

The R1T’s add-on list is a fun way to spend money. The coolest, most on-brand feature for this adventure truck is the $6,750 Camp Kitchen. Taking the place of the Gear Tunnel, this fully-equipped slide-out kitchen features a two-burner induction cooktop, a four-gallon water tank, and sink, and a 30-piece kitchen set by Snow Peak to fulfill all your camping culinary needs. 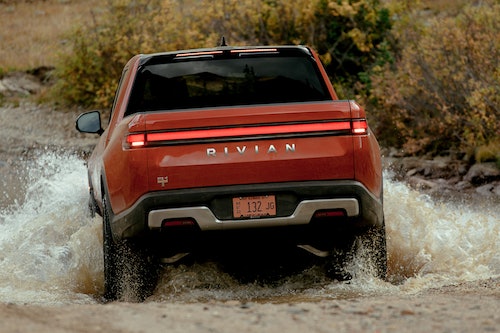 Rivian has the advantage with its five-year/60,000-mile bumper-to-bumper warranty on the R1T, which comes with a bonus battery pack and drivetrain warranty of eight years or 175,000 miles.

Tesla has not released specific warranty specs for Cybertruck, but the company’s Basic Vehicle Limited Warranty covers its vehicles for four years/50,000 miles. The Battery and Drive Unit Limited Warranty for its other models covers eight years and at least 100,000 miles.

Both companies cover reduced battery capacity, offering to replace the unit if it falls below 70 percent of its original capacity over the warranty periods.

Tesla had planned to produce the first Cybertrucks in 2021 and roll out more models in 2022. However, production has been delayed multiple times. Now, the official plan for Elon Musk and the company is to finish the development of Cybertruck in 2022 so production can begin in 2023. Buyers can place a fully refundable $100 deposit for the Cybertruck on Tesla’s website.

Rivian, too, fell behind its original timeline, its production cycle hurt in part by the events of the past two years. The company has begun shipping R1Ts to early-reservation customers, but new reservations are unlikely to be filled until 2023 and perhaps won’t come until even later. The Rivian R1T must be ordered online with a $1,000 deposit.

Just about every new electric vehicle maker is heralded as the “next Tesla,” but perhaps the most deserving contender is Rivian. A sleek startup that builds only EV trucks and SUVs and is backed by major investments and partnerships from corporations like Amazon, Rivian has finally begun production of its long-awaited all-electric pickup truck, the…

Just about every new electric vehicle maker is heralded as the “next Tesla,” but perhaps the most deserving contender is Rivian. A sleek startup that builds only EV trucks and SUVs and is backed by major investments and partnerships from corporations like Amazon, Rivian has finally begun production of its long-awaited all-electric pickup truck, the…

BA.2 is quickly becoming the dominant Covid-19 variant in the U.S. Should we be worried?