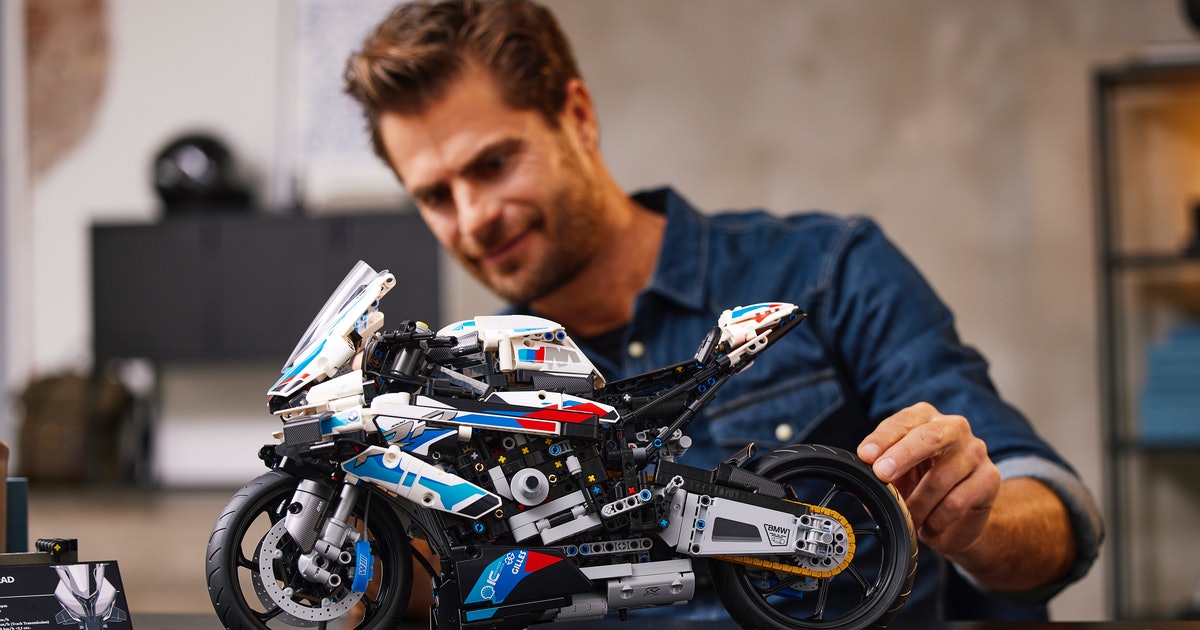 This LEGO BMW motorcycle is a 1,920-piece engineering masterclass

In 1958, Leonard Read penned the famous economic essay I, Pencil. It chronicles, from the perspective of the yellow writing tool, the boggling complexity of supply chains and market forces that allows a simple pencil to exist.

One doesn’t need to know the backstory of writing implements to fill out a form, just as there’s no need to understand how Wi-Fi works to use an iPhone. Simplicity and ease of use allow us to forget how complex the world is — but a French designer at a Dutch toy company wants to use a German motorcycle to help us understand everything a bit better.

The BMW M 1000 RR is a road-legal race bike built with a singular purpose: to get around a track as fast as possible. It’s a glorious piece of design and engineering, and it’s the first-ever “M” bike from BMW Motorrad, the Munich automaker’s revered motorcycle division.

It’s also the inspiration for the newest LEGO Technic set, a 1,920-piece stunner with a functional transmission, suspension, and an assembly process that replicates the one used by BMW technicians putting the full-sized M 1000 RR together at the factory.

LEGO Technic is more advanced and engineering-focused than the standard brick-based LEGO, using gears, axles, and custom parts to build various real-world cars and motorcycles. The signature element of LEGO Technic is not just replicating complicated components like gearboxes and engines but also making them work.

“The main thing in LEGO Technic is function,” Sam Tacci, lead designer for the LEGO version of the BMW M 1000 RR, tells Inverse. “We need to make things move.” The idea, he says, is not just to create a fun toy for people to put together but to teach engineering concepts at the same time.

At 1:5 scale, the BMW M 1000 RR is the largest motorcycle set LEGO Technic has ever released, and this was both an opportunity and challenge for the design team. The functional transmission in the LEGO version has three speeds plus neutral, a few gears less than the real thing, but it was still the first time LEGO has used this sort of mechanism for a transmission.

“The gearbox is a bit more intricate, and on a motorcycle, I wanted that gearbox to be as close as possible,” Tacci says. At this scale, “it wasn’t possible for me to fit a real six-speed gearbox plus neutral. A motorcycle is big, but the gearbox is super compact. It took a lot of time to assemble it and find the right ratio to make everything work. It had never been done before. Everything was a first on this project.”

After studying transportation design at ISD Rubika in his home country of France, Tacci designed real motorcycles at Honda and then Triumph. But he saw an opportunity to stretch his creative wings and joined LEGO Technic as a designer working on projects like the Top Gear Rally Car and Dom’s Dodge Charger from The Fast and the Furious.

This is the first time LEGO Technic has designed a bike to be assembled on a stand, and it follows the same basic formula used to construct the actual M 1000 RR motorcycle at the BMW Motorrad production facility in Berlin. “To me, it’s an homage to the people in the factory at BMW because they’re making one of the best bikes in the world,” Tacci says.

“It’s an homage to the people in the factory at BMW.”

With hundreds of steps in the instruction manual, keeping things clear and understandable is of utmost importance. Assembling a Lego set is done by hand, without tools or glue. As lead designer, Tacci worked closely with an “instruction buddy” who would shadow the design process and figure out how to illustrate 392 pages of step-by-step assembly instructions. And, though it’s primarily designed to be put together, the model also needs to come apart easily, without any pieces getting stuck together.

“When I was building the sketch model, I was thinking about how people will build it,” Tacci says. “I would go to my buddy and ask if this was a good way to do things or if it was too complicated.”

LEGO designers worked for months to design one of the most critical new parts on the BMW M 1000RR: the rear shock absorber. It’s a hefty LEGO set, weighing in at more than two pounds, and most of that weight rests on a single suspension component in the back.

“We had to make this plastic-molded spring. It’s a very thin element,” Tacci explains. “This spring had never been made before, a small element like this running around in a spiral. It gave the engineer quite a headache to make the plastic flow the whole way, and it’s moving, so it has to go back to the proper shape every time.”

The shock absorber has a metal spring hidden away inside that supports the actual weight of the bike, but that delicate spiral of blue plastic around the outside provides the visual effect of the suspension component.

“I tested the rear shock absorber units for two or three months, checking different tolerances and ratios,” Tacci says. “We ended up with the perfect one, and I can’t wait to see people using it on other products. I’m following the forums and watching the people who have received the motorcycle, and they’re very intrigued about the shock absorbers.”

The front disc brake has two different finishes on the same part, one glossy and the other matte. That looks simple, but it required a lot of engineering to make the injection molding. They had to go through several different types of rubber for the tires. Too hard, and you can’t mount them on the wheels without tools; Too soft, and they stretch too easily. There’s also clever engineering behind the new, 3D-printed transparent windshield.

LEGO Technic is much more than a toy to be assembled and put on a shelf. Yes, it’s supposed to be fun, but it’s also a tool to help kids (and adults!) learn about science and engineering.

“We teach kids, in a fun way, how things work. Showing that to people and making sure they understand the principle, and maybe someday they’ll invent another way of moving,” Tacci says. “That’s why I’m going to work every day. This motorcycle is made as it is in the factory, and maybe that’ll open someone’s eyes, and they’ll decide they want to go do that with their life.”

Tacci is excited about augmented reality’s potential. LEGO has an AR app that can show the inside of a vehicle and display what’s happening underneath.

“You still have the physical model, but then you use this layer on top of it to be a bit more curious about how things work,” he says. “That’s always what we do in LEGO Technic, but in augmented reality, it’s way more interesting. You can see things moving.”

Meshing analog and digital is something LEGO strives for. Though the company has seen great success with LEGO-themed video games and movies, the physical brick is central to everything.

“[The world] wants to drag us away from the physical. They want to take us away from building with our hands and playing with it,” he says. Racing games like Forza Horizon allow people to drive hundreds of different cars, but digital vehicles on a screen aren’t the same as a two-pound motorcycle you assembled yourself.

“Once you build it, you understand.”

“Kids are playing with hypercars, but they don’t know how the aerodynamics work, how the diffuser works or why it’s there,” Tacci laments. “I think we can show them that using augmented reality, to help them understand the principle.”

Engineering concepts like aerodynamics and powertrains can be incredibly difficult to visualize, which makes teaching them a challenge. But that’s perhaps where LEGO Technic is strongest.

“Once you build it, you understand,” he explains. “If you just see it on a screen, you don’t realize how much effort there is in things.”

Stay on top of the automotive revolution by signing up for Jordan Golson’s free car reviews newsletter.

In 1958, Leonard Read penned the famous economic essay I, Pencil. It chronicles, from the perspective of the yellow writing tool, the boggling complexity of supply chains and market forces that allows a simple pencil to exist. One doesn’t need to know the backstory of writing implements to fill out a form, just as there’s…

In 1958, Leonard Read penned the famous economic essay I, Pencil. It chronicles, from the perspective of the yellow writing tool, the boggling complexity of supply chains and market forces that allows a simple pencil to exist. One doesn’t need to know the backstory of writing implements to fill out a form, just as there’s…

This elusive toxin in the gut reawakens “zombie” viruses