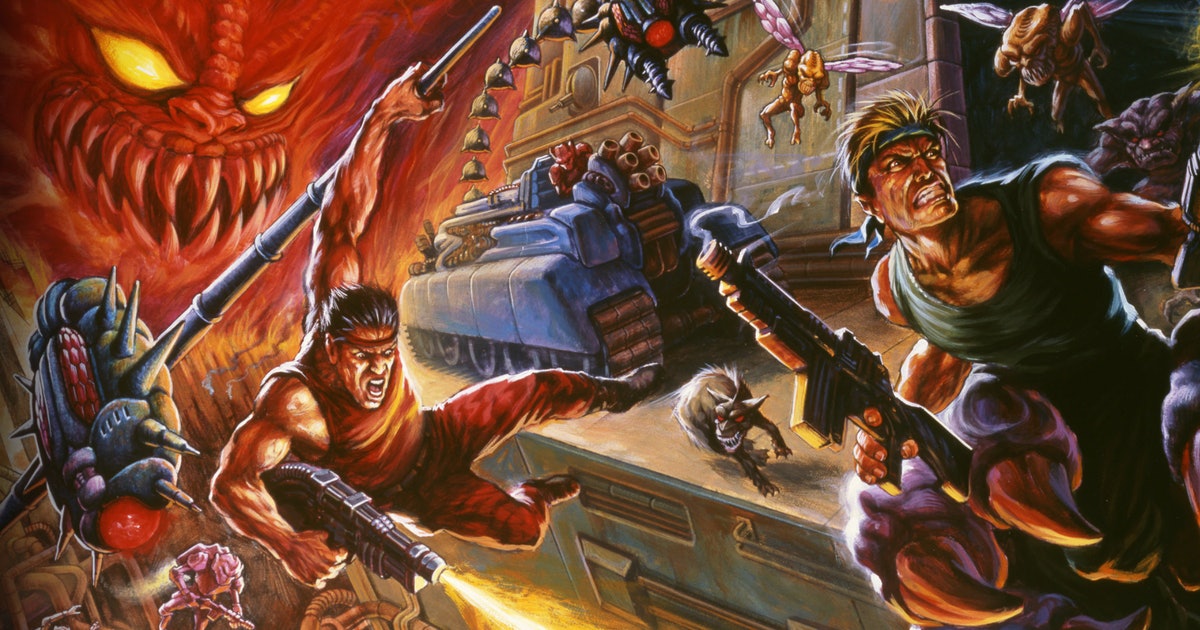 On November 13, 1986, then-President Ronald Reagan gave a speech to set American minds at ease. A scandal was brewing in his administration, rumors were flying that his administration had sold weapons to the Iranian regime, which was under an arms embargo. While Reagan admitted to having secret diplomatic relations with the Islamic regime, his administration “did not — repeat — did not trade weapons or anything else for hostages, nor will we.” What he didn’t know was that video game developer and publisher Konami, apparently, was paying attention. The game Konami made by riffing on this controversy blew up in arcades and would remain iconic even 35 years later.

In 1986, it quickly became clear that Reagan’s explanation was not so simple … or accurate. The Tower Commission, established by Reagan shortly after his first speech, quickly discovered that weapons were being traded for many different things.

The changes, which had been dripping out of Washington, were so unusual that the president needed to give a second address to the nation on March 4, 1987. His “heart” and “best intentions” still told Reagan that his administration had not sold weapons for cash, “but the facts and the evidence tell me it is not.”

It wasn’t just that he had sold the weapons to Iran. His administration had diverted the profits from these sales to right-wing militias in Nicaragua. Reagan’s administration wanted to destabilize and discredit the leftist Sandinista government, similar to how President Kennedy had tried overthrowing Fidel Castro decades earlier. These right-wing militias became known as la contrarrevolución, or Contras.

How closely tied up is the NES game Contra, which is celebrating its 35th anniversary today, with the Iran-Contra scandal that shares its name?

The game is named differently in Europe, where it’s called Gryzor, and in the PAL regions it’s called Probotector, a truly amazing combination of “protector” and “robot” that deserves more worldwide acclaim. But the classic game, which is available for $19.99 in the Nintendo Store as part of the Contra Anniversary Collection, deserves another playthrough no matter the connection.

In some ways, modern ultra-hard games like Returnal and Sifu owe a debt to the arcade games of Contra’s era. These games were made difficult on purpose, inspiring a gaming subculture that thirsts for unbeatable challenges to conquer. A game like Contra was made that way to devour more of the player’s quarters in arcades. In a home version, however, some elements of Contra’s original tensions are undoubtedly lost: There’s more pressure on the line when you’re rapidly losing more and more money rather than paying upfront.

Spending two or three consecutive hours with Contra was not possible for all players at the time of Contra’s release, which means today’s gameplay experience is undoubtedly easier. Dying over and over again, it is easier to map out the best routes, determine strategy, and get the timing just right. Contra offers a rapid-fire variety of weapons, from lasters to multi-stream blasters, and figuring out the best place for each is fun.

But most likely, a player will find themselves dying many times. Contra is a hard game, with bullets flying every which way. Robots shoot, soldiers shoot, robot soldiers shoot, and everything that doesn’t shoot is likely exploding or on fire or falling on top of you. In any case, if it moves, it can probably kill you. Contra is a game where your three lives are up before you know it.

Saves can help this situation, and, unlike Nintendo’s own archives, the Anniversary Collection provides easy-to-understand instructions on how to play. Contra may be hard, but it’s fascinating. A 2016 essay in Kill Screen posited that the game “lampoons Ronald Reagan’s self-image in the fight against communism during the Cold War,” creating an ultra-macho environment in which death is inevitable.

Is that accurate? Maybe! Maybe developers were just trying to cash in on popular action movies tropes and a word they saw in the news. Contra’s alien invasion story isn’t at the forefront of the arcade game. The grind of moving forward one step at a time is all you can focus on, regardless of what monstrosity stands in your path. And 35 years later, that specific challenge of lightning-quick reflexes remains enjoyable, which isn’t something you can say about every grueling arcade game from the annals of history.

On November 13, 1986, then-President Ronald Reagan gave a speech to set American minds at ease. A scandal was brewing in his administration, rumors were flying that his administration had sold weapons to the Iranian regime, which was under an arms embargo. While Reagan admitted to having secret diplomatic relations with the Islamic regime, his…

On November 13, 1986, then-President Ronald Reagan gave a speech to set American minds at ease. A scandal was brewing in his administration, rumors were flying that his administration had sold weapons to the Iranian regime, which was under an arms embargo. While Reagan admitted to having secret diplomatic relations with the Islamic regime, his…