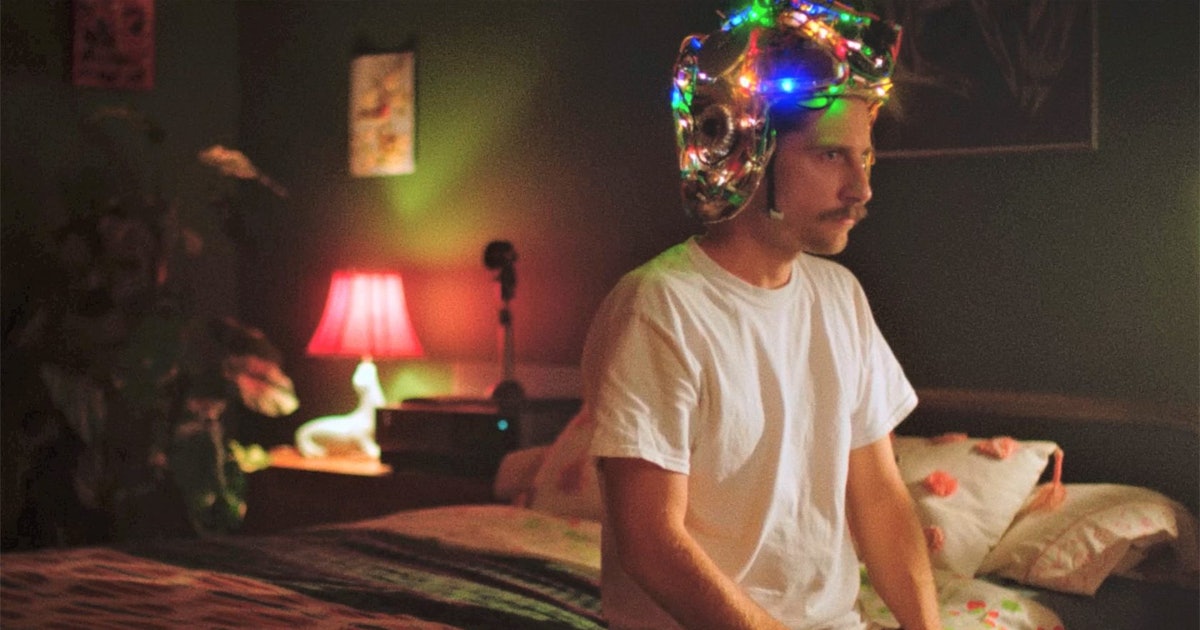 W.B. Yeats would faint watching Strawberry Mansion, the latest head-trip feature from eccentric writer-director duo Kentucker Audley and Albert Birney. Their vision of the future takes place in a hazy surveillance state where G-men peep on citizens’ dreams and levy taxes based on what they see. Tread softly indeed.

Science fiction has produced reams of Orwellian bureaucracies, both on screen and on the page. Strawberry Mansion occupies the same canon as THX-1138, Brazil, and V For Vendetta, where the feds are always watching and ready to bag dissidents and degenerates. But Audley and Birney have managed an impressive feat: They’ve made a film that rests comfortably alongside its peers and stands out from them.

Strawberry Mansion follows James Preble (Audley), a rumpled functionary assigned to collect that pesky dream tax from everyday Americans. Leaving the beaten path for a particularly arduous job, James travels out to the country to audit the dreams of Arabella (Penny Fuller), an oddball octogenarian artist with a veritable treasure trove of her dreams archived on VHS; during his stay on Bella’s farmhouse, Preble has to pour over the tapes and tally up the bill. But she keeps a conspiratorial secret in her dreams, and there’s some funny business involving dream-based subliminal advertising. The deeper James dives into Bella’s subconscious and meets her younger self (Grace Glowicki), the more he falls in love with her too.

Can a tax man change? Could the love of a free spirit deliver him from the oppressive, soul-crushing monotony of his thankless gig? Is a chicken shake – a “shake” made with whipped gravy and chicken meat – as disgusting as it sounds? Strawberry Mansion tackles these questions and others with a skip in its step rather than with tongue in cheek.

Describing the movie as “weird” does Audley and Birney’s achievement no justice; “weird” applies best to art that only leans on weirdness, like Salad Fingers or Too Many Cooks. Strawberry Mansion leans on sincerity. The film is surreal, bizarre, at times unnerving and terrifying, and always countercultural, but these qualities fall under an umbrella of earnest sentiment. Whatever Audley and Birney’s work means, they really mean it.

On the surface, Strawberry Mansion tells the tale of a troubled man increasingly disaffected with his profession. He longs for purpose. He finds romance for the first time and, after a series of daring adventures, finds happiness too. But that synopsis boils away Strawberry Mansion’s greatest pleasures, including Audley’s distant and longing performance as James, and the D.I.Y. aesthetic he and Birney favored in their last movie, 2017’s Sylvio. Sylvio has nothing on Strawberry Mansion; in retrospect, the story of an ape hosting a public TV show is downright normal compared to Strawberry Mansion’s reality-bending flights of fancy. Where the hallmarks of Audley and Birney’s dollhouse approach to production design are clear and present in Sylvio, they’re joyfully explosive in Strawberry Mansion.

Strawberry Mansion is giddily uncategorizable. Surface and substance are the same thing; look for deeper meaning about the state meddling in civilian life, but don’t let the search take away from the delight of Audley and Birney’s storytelling. Audley plays James as subdued, but behind the camera he must have had the time of his life. It’s as if he and Birney cleared out every Michaels within driving distance before turning vellum into comet tails, making amphibian papier-mâché heads, and conjuring a gigantic blue demon to menace James and Bella on the open seas.

Audley and Birney take the old and make it new, soaking their craftsmanship in the sticky molasses of subconscious dreaming. No one today makes movies the way they do, and they work with what passes as low budgets in 2022 (a “mere” $20 million!), so whatever they decide to do next odds are good they’ll have the capacity to do it. Let Strawberry Mansion’s vibrant style and playful imagination sweep you away to worlds none of us could dream up ourselves.

W.B. Yeats would faint watching Strawberry Mansion, the latest head-trip feature from eccentric writer-director duo Kentucker Audley and Albert Birney. Their vision of the future takes place in a hazy surveillance state where G-men peep on citizens’ dreams and levy taxes based on what they see. Tread softly indeed. Science fiction has produced reams of…

W.B. Yeats would faint watching Strawberry Mansion, the latest head-trip feature from eccentric writer-director duo Kentucker Audley and Albert Birney. Their vision of the future takes place in a hazy surveillance state where G-men peep on citizens’ dreams and levy taxes based on what they see. Tread softly indeed. Science fiction has produced reams of…

How the post-credits scene sets up a Netflix sequel