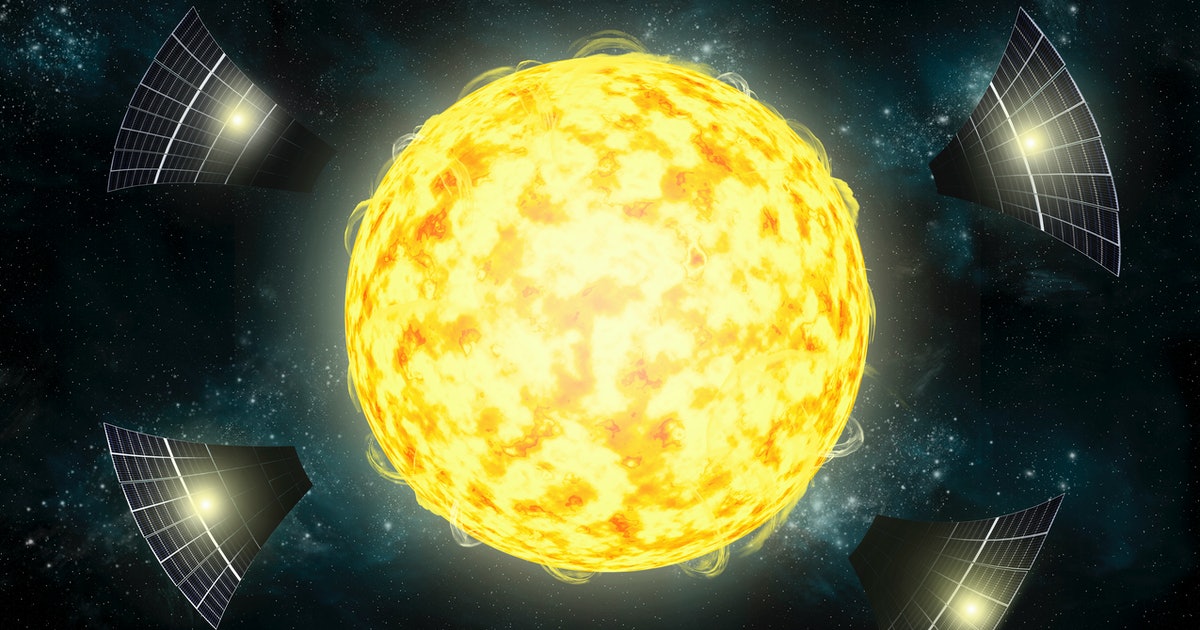 Astronomers looked at 260,000 stars to find alien megastructures in the Milky Way

When it comes to finding alien life in the universe, it may not be what you can find, but what you can’t. That’s exactly what a team of researchers set out to do by estimating just how many Dyson Spheres, a hypothetical energy source, could be built around stars in the Milky Way.

Their work is detailed in a study available on the preprint server arXiv.

Macy Huston, a graduate student at Penn State, and co-author of a new paper on the potential number of Dyson Spheres in the galaxy, explains why one needs to set theoretical expectations in their search.

“The idea behind upper limits is that often, we do not find what we are searching for,” Huston tells Inverse. “But, we can still learn something from that.”

What is a Dyson Sphere?

A Dyson sphere is a theoretical megastructure that surrounds a star to collect its energy output.

They were first proposed by physicist Freeman Dyson in 1960 as a solution to a growing alien civilization needing a large enough energy output to sustain its existence. In order to fuel their existence, they would build space-based stellar energy harvesting swarms around their host star, or other nearby stars, in order to harness its energy.

Dyson based his proposal on the fact that a planet only receives a small fraction of the energy produced by its host star.

For example, Earth only receives about one-billionth of the Sun’s total energy output. But if we were to create a space-based structure, we could meet our energy needs to push society to the next level. But Earthlings are far behind when it comes to developing this type of technology. Instead, only a super-advanced alien civilization would be capable of doing it.

Dyson had also proposed that the search for extraterrestrial intelligence (SETI) programs should “search for sources of infrared radiation” to “accompany the recently initiated search for interstellar radio communications.”

But to search for these hypothetical structures, researchers also need to know what they’re not able to find.

This, but in our century.

WHAT’S NEW — Using optical data from the Gaia Observatory, a space telescope launched by the European Space Agency in 2013, and infrared data from the AllWISE program — which provides the most comprehensive view of the full mid-infrared sky — the researchers behind the new study analyzed 260,000 stars in the Milky Way.

After putting together the brightness of these stars, the team then created models of Dyson Spheres that showed their potential temperature (which was estimated to be around 300 Kelvin) and how much of the star they would cover (which was about 10-90 percent of the star). They then compared that to the measurements of the stars’ temperature and luminosity.

“From this, we could determine the number of stars in the sample which would be compatible with the Dyson sphere models,” Huston says. “Then, that is the limit on how common such objects could be.”

“Any or all of these objects may have natural causes for their infrared excess, so this is just an upper limit, not a definitive rate of true Dyson spheres,” Huston clarifies.

WHAT’S NEXT — After narrowing down a potential number of stars that could be hosting Dyson Spheres, the team behind the study want to narrow in on these stars to conduct a search of the alien megastructures in the Milky Way.

“In order to fully understand what’s happening in each of these stars, the group would need to analyze their full spectra,” Huston says. “But, just a closer look at their spectral energy distributions…can help to rule out many types of natural dusty objects, which can initially look a lot like Dyson spheres.”

They are currently awaiting the release of data gathered by Gaia this summer to further examine the stars.

Abstract: Dyson spheres are hypothetical megastructures built by advanced extraterrestrial civilizations to harvest radiation energy from stars. Here, we combine optical data from Gaia DR2 with mid-infrared data from AllWISE to set the strongest upper limits to date on the prevalence of partial Dyson spheres within the Milky Way, based on their expected waste-heat signatures. Conservative upper limits are presented on the fraction of stars at G ≤ 21 that may potentially host non-reflective Dyson spheres that absorb 1 – 90% of the bolometric luminosity of their host stars and emit thermal waste-heat in the 100 – 1000 K range. Based on a sample of ≈2.7e5 stars within 100 pc, we find that a fraction less than ≈2e−5 could potentially host ∼300 K Dyson spheres at 90% completion. These limits become progressively weaker for less complete Dyson spheres due to increased confusion with naturally occurring sources of strong mid-infrared radiation, and also at larger distances, due to the detection limits of WISE. For the ∼2.9e8 stars within 5 kpc in our Milky Way sample, the corresponding upper limit on the fraction of stars that could potentially be ∼300 K Dyson spheres at 90% completion is ≤8e−4.

When it comes to finding alien life in the universe, it may not be what you can find, but what you can’t. That’s exactly what a team of researchers set out to do by estimating just how many Dyson Spheres, a hypothetical energy source, could be built around stars in the Milky Way. Their work…

When it comes to finding alien life in the universe, it may not be what you can find, but what you can’t. That’s exactly what a team of researchers set out to do by estimating just how many Dyson Spheres, a hypothetical energy source, could be built around stars in the Milky Way. Their work…