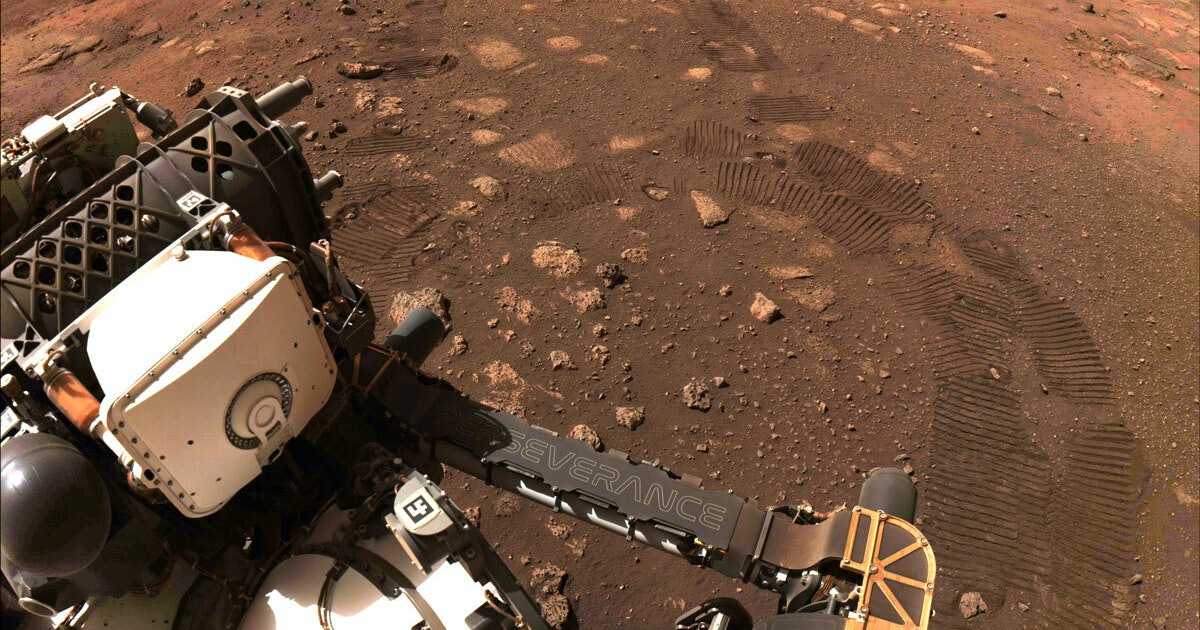 6 major breakthroughs Perseverance made during its first year on Mars

This time last year, a car-sized robot was carefully lowered down onto another world.

NASA’s Perseverance rover has been on Mars for a full Earth year. During that time, the little robot has gotten pretty familiar with Mars’ terrain and set off a historic mission to find out if life ever existed on the Red Planet.

Perseverance landed on Mars on February 18 with an unprecedented task of collecting samples from the Martian landscape, storing them in tiny tubes, and leaving them on Mars for a future pickup mission.

Here are some of the highlights of that mission so far, and what to look forward to from the Perseverance rover in the future.

The Perseverance rover launched at 7:50 a.m. Eastern time on July 30, 2020, from the Space Launch Complex 41 at Cape Canaveral Air Force Station, where the rover was strapped onto a United Launch Alliance Atlas V 541 rocket.

Perseverance underwent a series of intricate and terrifying maneuvers in order to land on Mars. Only about half of the missions sent to the Red Planet have successfully made it there since landing on another planet is not that easy.

The robot underwent a period of time known as the “seven minutes of terror.”

As it made its descent to the Red Planet, Perseverance went offline as ground control lost communication with the rover once it entered the Martian atmosphere. Due to an 11-minute delay in transmissions from Earth to Mars, the rover had to stick the landing on its own.

Once Perseverance’s wheels touched the surface of Mars, it cut the cables and safely landed on the planet.

Perseverance didn’t land on Mars on its own — it had a whirring companion tucked in its belly. NASA’s Ingenuity helicopter flew from the surface of Mars, marking humanity’s first powered, controlled flight on another planet. The entire flight lasted about 40 seconds.

Ingenuity is only 19 inches tall, with two four-foot-long carbon-fiber rotors spinning in opposite directions. This small size enables it to easily stow away inside Perseverance, and it was later released from the rover once the pair landed safely on Mars.

Flying a helicopter on Mars is much different than flying one on Earth. Mars’ atmosphere is much thinner than Earth’s, about one percent of the air pressure. It also only has about 40 percent of Earth’s gravity.

This means the Ingenuity helicopter needed to be built for the particulars of the Martian environment. Ingenuity is packed with a much larger rotor, which has to be both stiff and light in order for the team to be able to control it on Mars.

As a proof of concept, Ingenuity isn’t designed to last long, but will be a good test for future missions to places with substantial atmospheres like Venus or Saturn’s moon Titan, which has a thick atmosphere and a high potential for life.

Of course, Perseverance had to make sure it was on target for its main mission. After nearly 200 sols on Mars, Perseverance collected its first two samples from the Red Planet after drilling through a rock nicknamed Rochette.

This marked the rover’s second attempt at collecting a piece of the Red Planet and the first successful one. Earlier in August, Perseverance attempted to collect a sample of Martian rock but ended up pulverizing the sample into tiny bits.

But its second attempt proved to be far more successful as Perseverance drilled two holes in the basaltic rock, which means that it may have formed from lava flows. Crystalline minerals in volcanic rock can help scientists accurately date when the rock formed and could provide a timeline of Mars’ history and how its climate changed billions of years ago.

Perseverance carries 43 titanium sample tubes and is supposed to collect at least 20 samples from Mars during its 687 Earth day mission on Mars.

By December 2021, Perseverance had extracted its sixth sample from Mars.

Shortly after landing on Mars, Perseverance beamed down the first batch of images it had taken of the Red Planet.

Perseverance’s initial images provided the first ground-based evidence that Mars may have once housed a delta branching out into a lake in Jezero Crater.

An analysis of the images of Jezero Crater showed clear signatures of an ancient delta on Mars through long-distance observations. The images are of the western fan-shaped deposit of sediments — the delta. A delta is a landform that emerges as river flow deposits sediment.

Perseverance is currently driving toward the delta, and targeting similar rocks at the base while en route. These rocks date back to about 3.9 billion years ago, early on in Mars’ history when the planet may have been habitable.

Perseverance not only drills rocks for samples, but it also zaps them with laser beams.

Perseverance’s SuperCam is equipped with a laser that zaps at Martian rocks at a distance of about 20 feet. As the laser fires at the rocks, a small amount of the rock vaporizes into a hot gas called plasma, and the heat and vibration creates a shockwave that makes a popping sound.

The camera and spectrometer identifies the chemical makeup of the vaporized rock while the microphone hears the popping sound. That ‘pop’ tells scientists about the mass of the rocks, and how hard or soft it is.

The rover’s zapping of a rock is a way for Perseverance to study the mineralogy and chemistry of Martian rocks. By firing at rock samples, Perseverance can learn more about its composition thanks to its SuperCam instrument, which analyzes it through images and sounds.

Perseverance carried not one but two microphones to Mars.

The Entry Descent and Landing (EDL) microphones were designed to capture the sounds of Perseverance’s landing on the red planet, and the eerie noise of another world.

Shortly after landing, Perseverance released a five hour recording of the sounds of Mars and the rover’s robotic roaming of the planet. The rover’s microphones also picked up the low-frequency whirring sound of the Ingenuity helicopter’s rotor blades flying more than 260 feet away.

In the recording, the Martian winds can be heard on top of the rover’s metal wheels rolling across its dry surface.

This time last year, a car-sized robot was carefully lowered down onto another world. NASA’s Perseverance rover has been on Mars for a full Earth year. During that time, the little robot has gotten pretty familiar with Mars’ terrain and set off a historic mission to find out if life ever existed on the Red…

This time last year, a car-sized robot was carefully lowered down onto another world. NASA’s Perseverance rover has been on Mars for a full Earth year. During that time, the little robot has gotten pretty familiar with Mars’ terrain and set off a historic mission to find out if life ever existed on the Red…