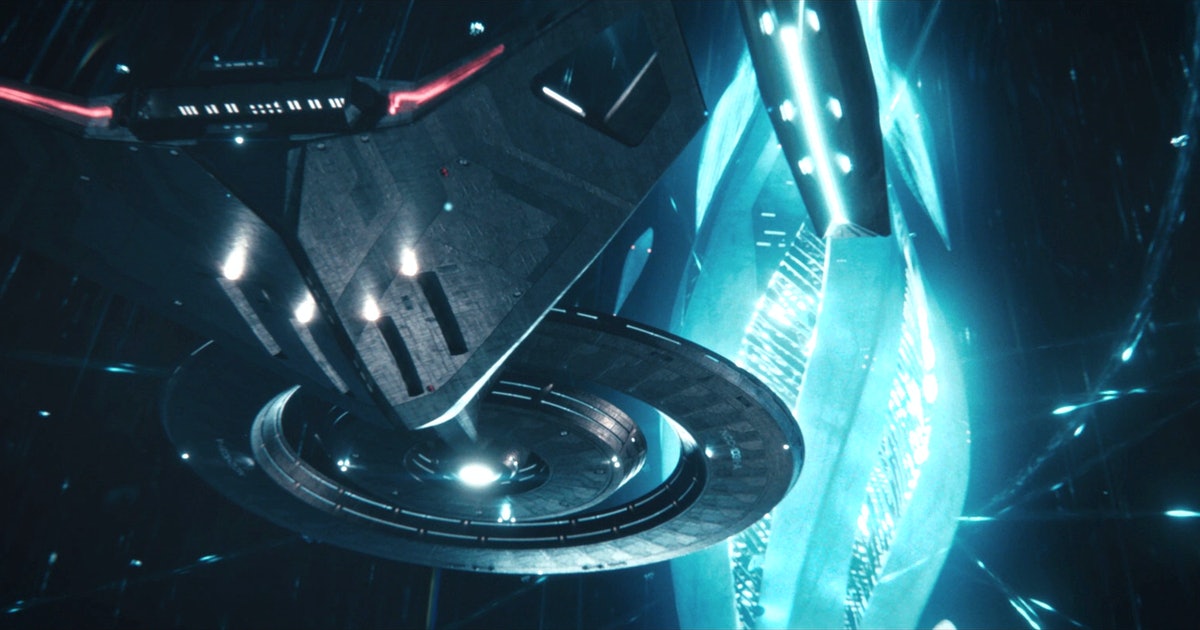 Time travel rules in Star Trek are tricky. Everyone knows you’re not supposed to mess with the past when you’re from the future. But what about the other way around? In Star Trek: Discovery Season 4, Episode 9, “Rubicon,” Nhan (Rachael Ancheril) tells Captain Burnham (Sonequa Martin-Green) that keeping the secret of their shared time travel from the past is difficult. But why can’t Nhan or any of the DISCO crew talk openly about being time travelers?

We got in touch with the Discovery writer of this episode, Alan McElroy, to ask about this new Star Trek time travel twist.

In “Rubicon,” one former crew member of the USS Enterprise and the USS Discovery returns to the series after departing in Season 3. Security officer Nhan (Rachael Ancheril) was last seen in Season 3 Episode 5, in which she elected to remain with a Federation seed ship crewed by people from her home planet of Barzan. Nhan’s return in “Rubicon” is a big deal for three reasons:

And it’s in this final plot point where some Star Trek time travel rules get interesting. Burnham asks Nhan why she decided to come back and work for Starfleet security, leaving her home planet behind. Nhan reveals that part of her decision was connected to her inability to be entirely honest with her family — the people who are essentially descendants of her original family in the 23rd century. “I couldn’t tell them I was from the past.”

At the end of Season 2, along with Burnham and the crew of Discovery, Nhan jumped from the year 2258 to 3189. This episode makes pretty clear that Starfleet doesn’t want the crew revealing that they are time travelers to anyone. But why?

In Season 3, we learned that time travel had been made illegal in the 32nd century following the “Temporal Wars.” (These wars were previously referenced in the prequel series Enterprise.) Furthermore, in the episode “Terra Firma Part 1,” Dr. Kovich (David Cronenberg) also told Dr. Culber (Wilson Cruz) that the Temporal Accords — a set of laws governing time travel — are “ironclad.” And now, as seen in “Rubicon,” the first rule of time travel in the 32nd century is you can’t talk about time travel. Ever.

“Yes, the Temporal Accords place a tremendous restriction on information concerning Discovery’s existence,” writer Alan McElroy tells Inverse. “Nhan, as a Barzan, would be especially sensitive to not revealing any information that would violate her oath and duty to the Federation and Starfleet.”

McElroy also points out that this isn’t just about cool Star Trek canon rules. The larger story is about Nhan feeling like she’d “abandoned her family” by time traveling. “The journey of this episode helps Nhan forgive herself,” he says.

So, if the Temporal Accords prevent Nhan from talking to her own family about really being a time traveler from the distant past, are most members of Starfleet unaware that the USS Discovery traveled through time?

“Yes, there are those within Starfleet who only know the cover story,” McElroy explains. And then explains that the “official” Starfleet cover story for Discovery is that the ship was “in deep space at the time of the Burn and has only recently returned to the Alpha Quadrant.”

Basically, only people in “the highest levels of Starfleet Command, and at Federation Headquarters” know the actual truth about Discovery’s origins, “per the Temporal Accords and Starfleet order.”

Finally, McElroy confirms the Season 3 moment when Discovery was given an “A” to its registry number was specifically so Starfleet could make it seem like Discovery was a newish ship that had been lost for a while. As McElroy puts it, “Hence the ship being re-designated U.S.S. Discovery-A to satisfy the curiosity and questions of the public at large”

Within most episodes of Discovery, a considerable number of characters are in the know. However, what Nhan’s journey reveals is the very tip of the iceberg of a larger galactic population that has no idea that a starship from over nine centuries in the past was the key to saving the future.

In the Season 2 finale, “Such Sweet Sorrow Part 2,” Spock (Ethan Peck) pushed Starfleet to classify everything about the USS Discovery, effectively making its entire journey a secret mission. And what Season 4 of Discovery just proved is that Spock’s plan worked. Even now, 930 years later, Discovery is still undercover.

Time travel rules in Star Trek are tricky. Everyone knows you’re not supposed to mess with the past when you’re from the future. But what about the other way around? In Star Trek: Discovery Season 4, Episode 9, “Rubicon,” Nhan (Rachael Ancheril) tells Captain Burnham (Sonequa Martin-Green) that keeping the secret of their shared time…

Time travel rules in Star Trek are tricky. Everyone knows you’re not supposed to mess with the past when you’re from the future. But what about the other way around? In Star Trek: Discovery Season 4, Episode 9, “Rubicon,” Nhan (Rachael Ancheril) tells Captain Burnham (Sonequa Martin-Green) that keeping the secret of their shared time…