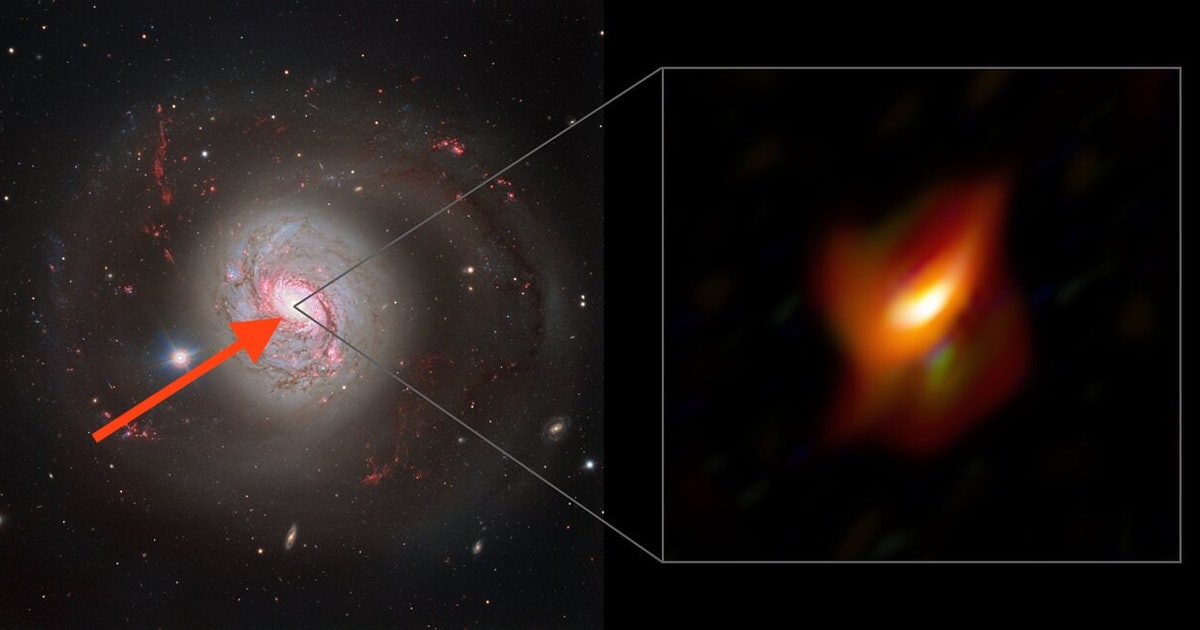 In the vastness of space, there are plenty of places to hide. Astronomers recently caught a sneaky supermassive black hole hiding behind a cloud of cosmic dust at the center of a distant galaxy. Their discovery helps confirm predictions of some of the brightest, yet most mysterious, objects in the universe known as active galactic nuclei (AGN).

The discovery is detailed in a study published Wednesday in the journal Nature.

What is an active galactic nuclei?

AGNs are a compact region of space located at the center of galaxies, causing those galaxies to be much brighter than others. AGNs emit a massive amount of energy, often outshining the galaxy itself.

The brightness is not stars alone. Instead, AGNs are powered by supermassive black holes that emit bright jets of accelerated particles shooting out into space. These jets are caused by the black hole feeding on surrounding gas and dust. Before it is swallowed up, some of that material spirals towards the black hole and releases enormous amounts of energy.

WHAT’S NEW — Using the European Southern Observatory’s Very Large Telescope (ESO’s VLT) in Chile, a team of scientists made detailed observations of the center of the galaxy Messier 77, also known as NGC 1068.

The galaxy is located about 47 million light-years away in the constellation Cetus and has a very compact and bright core. The astronomers found a supermassive black hole shrouded by a thick cloud of gas and dust by looking at its center.

The image shows a thick inner ring and a more extended disc of gas and dust, with the black hole located at the center of the galaxy.

WHY IT MATTERS — The discovery confirms a 30-year-old theory known as the Unified Model of AGNs. Although they share similar qualities, AGNs are not all born equal. Some of these AGNs release bursts of radio waves, while others can be seen shinning brightly in visible light. However, in the case of Messier 77, its highly energetic core appeared more subtle in observations since it was clouded by the thick layer of cosmic gas and dust.

The differences that appear between the observations of different AGNs may then be the result of how these observations are captured from our view on Earth, affecting how much of the cosmic gas and dust cloud is in our way of seeing the luminous black hole at the center.

“The real nature of the dust clouds and their role in both feeding the black hole and determining how it looks when viewed from Earth have been central questions in AGN studies over the last three decades,” Violeta Gámez Rosas, a researcher at Leiden University in the Netherlands, and lead author of the new paper, said in a statement. “Whilst no single result will settle all the questions we have, we have taken a major step in understanding how AGNs work.”

WHAT’S NEXT — After finding a hidden supermassive black hole at the center of Messier 77, the astronomers behind the recent discovery are hoping to rat out more of these sneaky cosmic beasts. They plan on using ESO’s VLT to find more of these black holes by expanding their search, and including more galaxies for their sample.

“Our results should lead to a better understanding of the inner workings of AGNs,” Gámez Rosas said. “They could also help us better understand the history of the Milky Way, which harbours a supermassive black hole at its centre that may have been active in the past.”

Abstract: In the widely accepted ‘Unified Model’1 solution of the classification puzzle of Active Galactic Nuclei, the orientation of a dusty accretion torus around the central black hole dominates their appearance. In ‘type1’ systems, the bright nucleus is visible at the centre of a face-on torus. In ‘type-2’ systems the thick, nearly edge-on torus hides the central engine. Later studies suggested evolutionary effects2 and added dusty clumps and polar winds3 but left the basic picture intact. However, recent high-resolution images4 of the archetypal type-2 galaxy NGC 10685,6 suggested a more radical revision. They displayed a ring-like emission feature which the authors advocated to be hot dust surrounding the black hole at the radius where the radiation from the central engine evaporates the dust. That ring is too thin and too far tilted from edge-on to hide the central engine, and ad hoc foreground extinction is needed to explain the type-classification. These images quickly generated reinterpretations of the type 1-2 dichotomy7,8. Here we present new multi-band mid-infrared images of NGC1068 that detail the dust temperature distribution and reaffirm the original model. Combined with radio data [G, J. F. and I, C.M.V, in preparation], our maps locate the central engine below the previously reported ring and obscured by a thick, nearly edge-on disk, as predicted by the Unified Model. We also identify emission from polar flows and absorbing dust that is mineralogically distinct from that towards the Milky Way centre

In the vastness of space, there are plenty of places to hide. Astronomers recently caught a sneaky supermassive black hole hiding behind a cloud of cosmic dust at the center of a distant galaxy. Their discovery helps confirm predictions of some of the brightest, yet most mysterious, objects in the universe known as active galactic…

In the vastness of space, there are plenty of places to hide. Astronomers recently caught a sneaky supermassive black hole hiding behind a cloud of cosmic dust at the center of a distant galaxy. Their discovery helps confirm predictions of some of the brightest, yet most mysterious, objects in the universe known as active galactic…

You’ve already experienced the true cause of ‘Havana Syndrome’

Where to find them and the rewards you’ll get