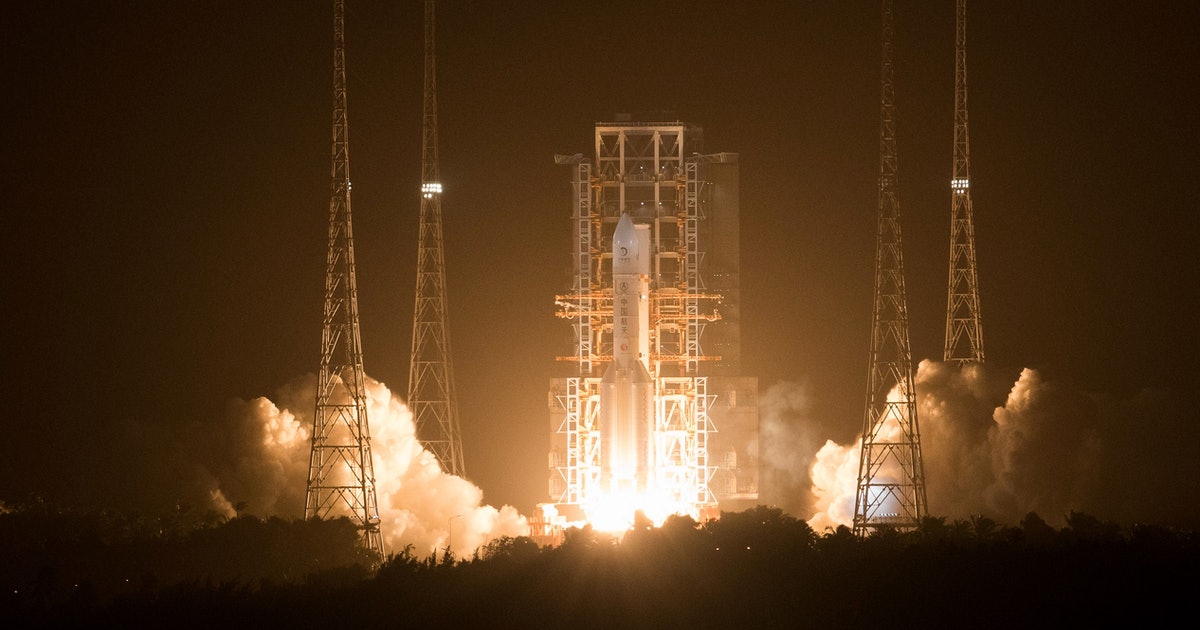 Whose rocket is going to hit the Moon? The space debris culprit, revealed

On March 4 around 7:25 am Eastern time, a spent rocket booster is going to crash into the Moon. But it’s not the booster we thought it was.

Initial calculations by a group of amateur skywatchers implicated one of SpaceX’s Falcon 9 rockets as the impending impactor. That had everyone from Twitter commentators to the European Space Agency taking shots at the spaceflight company and its founder Elon Musk for despoiling our orbital companion. (The ESA slyly notes that, while their recent launch of the James Webb Space Telescope followed a similar orbit, “its upper stage has already evaded a comparable fate thanks to a specifically developed and qualified maneuver.”)

It’s the first time an object not immediately associated with a lunar mission will be recorded hitting the Moon.

But Musk is off the hook (this time, at least). Updated calculations show the booster belonged not to a Falcon 9, but to the Long March 3C/E rocket that launched a Chinese moon mission back in 2014. That mission, called Chang’e 5-T1, was a kind of practice run for the country’s 2020 Chang’e 5 mission to collect and return lunar samples to Earth.

On its way to the Moon, the rocket jettisoned its second stage booster, which settled into a wide orbit around the Earth. In 2015, the Catalina Sky Survey, a NASA project that keeps an eye out for near-Earth asteroids and comets, noticed the booster and, initially thinking it was an asteroid, gave it the name WE0913A. That’s when a few citizen scientists, including Bill Gray — who runs a popular blog called Project Pluto tracking near-Earth objects — started trying to discern what it was.

As Gray writes in a blog post, they noticed that WE0913A went past the Moon just two days after a SpaceX rocket launching the Deep Space Climate Observatory (DSCOVR) left Earth. Paired with some other information about how it was moving, Gray thought it was a reasonable assumption that the cast-off Falcon 9 booster from the mission was the culprit.

Then, in January of 2022, Gray asked for more data on the booster’s orbital path and, as Ars Technica reported, concluded it was on a direct course for the Moon. Cue the outrage and hysterical tabloid coverage.

But just over a month later, Gray says he got an email from Jon Giorgini, a member of NASA’s Jet Propulsion Laboratory. According to Giorgini, the DSCOVR mission never actually passed by the Moon during the time when the booster, then called WE0913A, was near the Moon. So, the Falcon 9 was off the hook.

With some more digging, Gray turned up data on the 2014 Chang’e 5-T1 mission’s trajectory that put it almost exactly where WE0913A was seen. It’s “fairly convincing evidence” that the Chinese booster is the one en route to crash landing on the Moon, he writes. The booster will likely hit somewhere in or near the Hertzsprung crater on the Moon’s far side, Gray calculates.

Will the Chang’e 5-T1 rocket hurt the Moon?

If you’re worried about how the Moon is handling all of this, rest easy. The Moon will be fine, says Jonathan McDowell, an astrophysicist at the Harvard-Smithsonian Center for Astrophysics.

Without an atmosphere, the Moon is hit by space rocks of all kinds — and it’s far from the first time humans have crashed something into the Moon. There’s a rich history of hunks of man-made metal kissing our satellite’s surface, from the “hard” (read, crash) landings of the first moon missions in the late 1950s and early 1960s to the purposeful impacts of the Apollo missions’ Saturn V rocket boosters that tested seismometers left on the Moon by astronauts.

But the Chang’3 5-T1 booster gestures at a bigger problem for spaceflight. While orbital space junk in lower orbits gets a lot of attention because of the very real potential for it to destroy satellites or even human missions, there’s plenty of trash in higher orbits, too.

“There’s a whole bunch of stuff that went out there in the 60s and 70s and 80s that we have no idea what happened to it,” McDowell tells Inverse. Though astronomers are beginning to find more of these cast-offs, it can be difficult to even figure out where a given object comes from, as the back-and-forth over the upcoming collision makes clear.

Calculating where these objects will be in even a few years is another challenge. Farther from Earth, the Sun and Moon’s gravities tug at objects, skewing their orbits in complex ways.

“It’s still predictable what the changes are going to be, but a small error makes a big change,” McDowell says. “So in practice, you can’t predict accurately what the orbit’s going to be years from now.”

Further adding to the difficulty, there’s nobody actually tracking objects like the Chang’e 5-T1 booster full-time, unlike the space junk in low-Earth orbit.

“Probably the world can afford for at least one person to be paid to do this,” McDowell says.

This might be the first time we’ve seen errant space junk hit the Moon, but McDowell thinks it’s probably not the first time it’s happened, given the lack of tracking. And, all things considered, it almost certainly won’t be the last time, either. Look out, Moon!

On March 4 around 7:25 am Eastern time, a spent rocket booster is going to crash into the Moon. But it’s not the booster we thought it was. Initial calculations by a group of amateur skywatchers implicated one of SpaceX’s Falcon 9 rockets as the impending impactor. That had everyone from Twitter commentators to the…

On March 4 around 7:25 am Eastern time, a spent rocket booster is going to crash into the Moon. But it’s not the booster we thought it was. Initial calculations by a group of amateur skywatchers implicated one of SpaceX’s Falcon 9 rockets as the impending impactor. That had everyone from Twitter commentators to the…

Everything we know so far about the potentially record-breaking missions

Scientists weigh one of the most mysterious particles in the universe