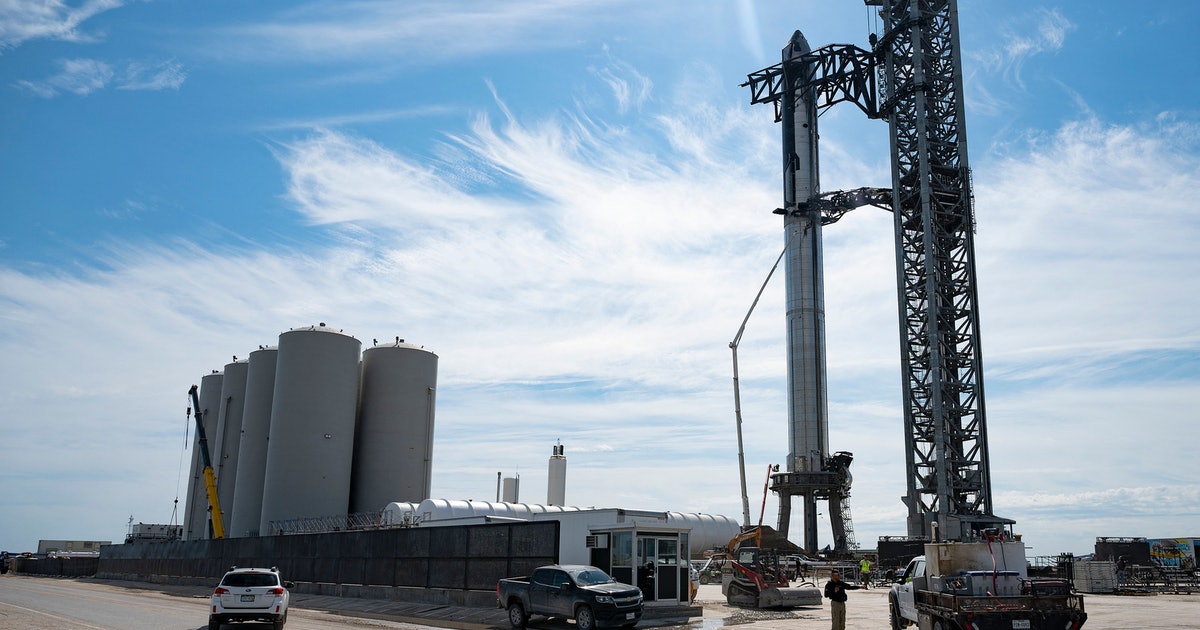 Here’s what you need to know

The rocket could be humanity’s ticket to Mars, but it will need to pass an important test first. SpaceX plans to send the rocket from Texas to Hawaii in a short flight that should demonstrate its orbital flight capabilities. CEO Elon Musk suggested in 2019 that such a flight could happen in a matter of months, but it’s now expected for later this year.

At a February 2022 event at the Starbase facility in Texas, Musk declared that the ship would likely be ready to fly “around the same time” as the Federal Aviation Administration completes its required assessment. On February 15, the administration delayed the publication to March 28.

First unveiled in 2017 under the name “BFR,” the Starship is a fully reusable vessel designed to send over 100 tons or 100 people into space at a time. It can replace the firm’s existing rockets like the Falcon 9 and Falcon Heavy, while also taking on more ambitious goals like sending humans to Mars and beyond.

SpaceX is not waiting around to start these missions. The firm is aiming to send the first humans to Mars by the mid-2020s, before establishing a self-sustaining city on Mars as early as 2050.

It could all start with the Starship — and at around 400 feet when paired with the Super Heavy booster that lifts it away from the Earth, this thing is huge. It greatly eclipses the Falcon 9, which measured less than 230 feet tall. It’s also powerful, with liftoff thrust of 16 million pounds.

If successful, it will become the tallest and most powerful rocket ever. For comparison, the current record holder on both counts is NASA’s Saturn V, which measured 363 feet tall and offered 7.6 million pounds of thrust at launch.

Want to find out more about SpaceX’s plans for Starship? Subscribe to MUSK READS+ for exclusive interviews and analysis about spaceflight, electric cars, and more.

SpaceX Starship orbital flight: what is the plan?

In May 2021, a document from the Federal Communications Commission revealed the plan for the first flight.

The ship will take off from the firm’s Starbase, Texas, launch facility. Around two minutes after liftoff, at 171 seconds, the Super Heavy booster will separate from the Starship. The ship will continue to complete a targeted landing around 60 miles northwest of the coast of Hawaii. The whole flight will last around 90 minutes.

SpaceX will not land the booster or the ship on land. The booster will land in the Gulf of Mexico, around 20 miles offshore, at 495 seconds or eight minutes after launch. The ship will complete a targeted powered landing in the sea.

SpaceX Starship: when is the orbital flight?

At the company’s February 2022 event, Musk declared that SpaceX will finish the ship around the same time as the Federal Aviation Administration completes its mandatory environmental assessment. On February 15, the administration delayed the publication of the report from February 28 to March 28.

At the same event, Musk also suggested the company could fly the ship from Cape Canaveral in Florida instead, where the company has already received clearance to fly. Musk would consider flying out of Cape Canaveral if the flight is delayed by four to eight months at Starbase.

Of course, it’s entirely possible SpaceX misses these deadlines. In September 2019, Musk suggested an orbital flight could take place in a matter of months.

The firm’s application to the FCC requested a launch window of June to December 2021 — a window that has passed completely.

In August 2021, Musk suggested on Twitter that the flight was just around the corner:

“First orbital stack of Starship should be ready for flight in a few weeks, pending only regulatory approval”

In June 2021, company president Gwynne Shotwell claimed the firm was “shooting for July” for its first orbital flight. Shotwell told the National Space Society’s International Space Development Conference that “I’m hoping we make it, but we all know that this is difficult.”

That month, CNN also reported that the firm had yet to receive clearance from the Federal Aviation Administration for the flight. The firm has faced off with the organization ahead of the flight, most recently over a launch tower that the organization claims does not have government approval.

On June 29, Musk claimed at the Mobile World Congress that “we are going to do our best to do an orbital [Starship] launch attempt in the next few months.”

“There is the internal goal if things go right, which needs to be aggressive. Obviously, some things will not go right internally & there will be external issues too. That said, I think we can stack an orbital ship on an orbital booster in July.”

In August 2021, SpaceX successfully stacked the Starship ship on top of the Super Heavy booster in preparation for the orbital flight.

Underneath the ship is the launch platform. This giant ring-shaped structure is used to support the ship during the upcoming launch.

SpaceX Starship orbital flight: which ship will it use?

SpaceX will use the SN20 prototype of the ship for its launch, NASASpaceflight reporter Chris Bergin reported in March.

The firm will send Starship to orbit using a prototype Super Heavy booster dubbed Booster 4. Its predecessor, Booster 3, will be used for ground tests ahead of the launch.

On Friday, Musk posted on Twitter that Booster 3 would “probably” host a static test fire on Monday. This test, a standard for any launch, fires the rocket’s engines without letting the vehicle move. It’s important to note that SpaceX does not plan to launch Booster 3.

“We’re changing much of design from 3 to 4,” Musk wrote on Twitter on June 30. “Booster 3 was very hard to build. Expect especially rapid evolution in first ~10 boosters & first ~30 ships.”

Fans have noted that the first orbital flight could contain some Musk-style in-jokes. The test is expected to use the SN20 ship and Booster 4 prototypes, a possible allusion to 4/20. The Booster 3 model currently stood on the pad measures 69 meters, another possible joke.

However, Musk claimed on Twitter that these were all “pure coincidence” — although he has made those jokes before.

SpaceX Starship orbital flight: how did we get here?

Starship, SpaceX’s giant under-development ship, could soon take its first orbital flight. The rocket could be humanity’s ticket to Mars, but it will need to pass an important test first. SpaceX plans to send the rocket from Texas to Hawaii in a short flight that should demonstrate its orbital flight capabilities. CEO Elon Musk suggested…

Starship, SpaceX’s giant under-development ship, could soon take its first orbital flight. The rocket could be humanity’s ticket to Mars, but it will need to pass an important test first. SpaceX plans to send the rocket from Texas to Hawaii in a short flight that should demonstrate its orbital flight capabilities. CEO Elon Musk suggested…