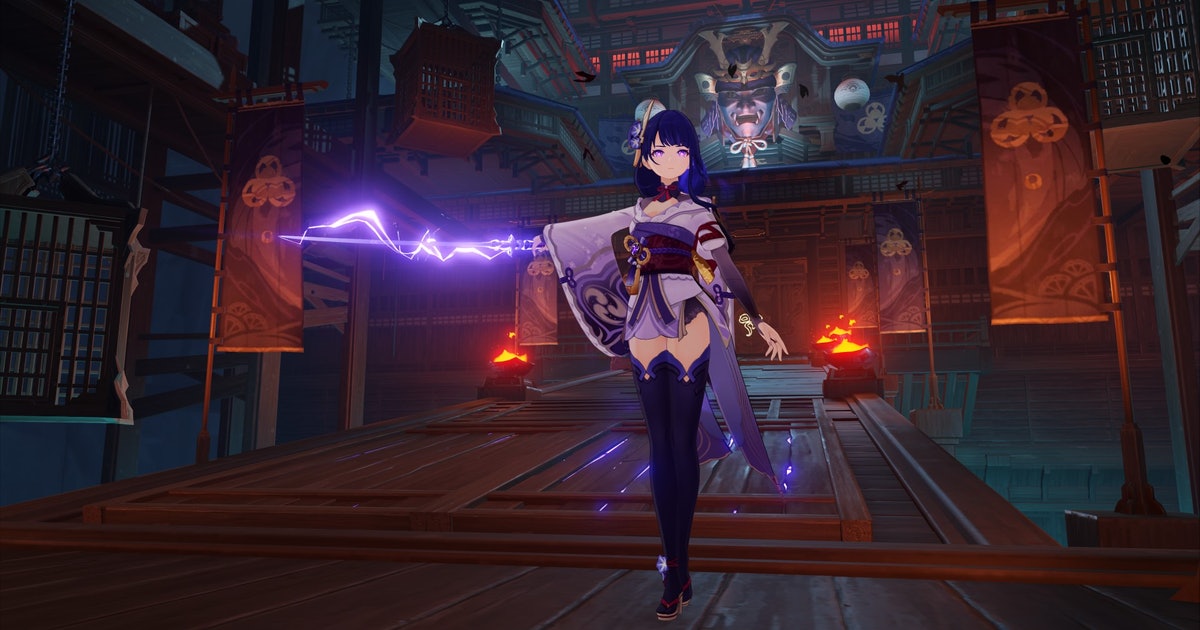 Best weapons and artifacts for the Archon

It’s not long before the Raiden Shogun returns. The first half of Genshin Impact version 2.5 may be dedicated to the long-anticipated shrine maiden, Yae Miko, but after that, it’s rerun time. Starting around March 8, 2022, you’ll be able to take your chances wishing for Kokomi and the Raiden Shogun. Many players who missed the Electro archon in version 2.1 will be saving up in the hopes of grabbing her. But what’s the best build for Raiden Shogun if and when you do recruit her?

She’s an extremely powerful character, after all. Like Venti and re-released Zhongli, Inazuma’s archon of eternity has a very unique role on the battlefield as a damage-dealer who can also provide incredible support for your party’s elemental bursts. When your party members use their bursts, they buff hers, and when she activates her Musou Isshin super-state, she recharges energy for their bursts in turn.

This creates a deadly cycle of burst-feeding-burst, and it’s one of the things that makes her such a fun addition to your party—that, and she can deal a supercharged deathblow when she casts her burst. In this Genshin Impact Raiden Shogun build guide, I’ll run through her best setup, as well as a free-to-play option that you can get by simply fishing.

The Electro Archon is best used as a battery because when she hits enemies in her Musou Isshin burst state, she recharges energy for all other characters in the party. They, in turn, charge her Chakra Desiderata with Resolve whenever they use a burst, increasing the damage she deals when she unleashes it.

When you throw in her “Eye of Stormy Judgment” skill and its buff to burst damage, you have an amazing support character who can also hit hard. Her “Enlightened One” passive boosts the burst recharge her Musou Isshin provides by 0.6 percent, and grants a 0.4 percent Electro damage bonus for every point of energy recharge she has above 100 percent.

This means that to get the most out of Raiden, you should focus on giving her lots of energy recharge. Luckily, there’s a weapon and an artifact set that were tailor-made for her:

Engulfing Lightning is the Raiden Shogun’s five-star polearm, and it basically adds another layer to that “Enlightened One” passive. The weapon boosts attack by 28 percent of whatever your energy recharge is above 100 percent, which of course, synergizes amazingly well with her. You also gain 30 percent increased energy recharge for 12 seconds after using an elemental burst—a perfect combo for the burst recharge that her Musou Isshin state already provides. And lastly, it boosts energy recharge as a substat.

In terms of artifacts, Emblem of Severed Fate also provides some decent bonuses based on energy recharge. For two pieces, it’s buffed by 20 percent, while four pieces increase elemental burst damage by 25 percent of your energy recharge. In terms of stats, you’ll want to prioritize energy recharge, attack, crit rate, and crit damage, allowing Raiden to deal critical hits while in her Musou Isshin state. If you can get both the weapon and a decent set of Emblem of Severed Fate, she can be an insanely strong character.

Luckily, there’s a great no-spend weapon option that released alongside the Raiden Shogun in Genshin Impact 2.1:

The Catch is a four-star polearm that you can get from the Inazuma fishing association. All you have to do is catch six Raimei Angelfish, 20 Golden Koi, and 20 Rusty Koi to claim the weapon. It boosts energy recharge as a substat and buffs elemental burst damage by 16 percent and burst crit rate by 6 percent. Another big advantage is that you can refine it for free by getting Ako’s Sake Vessels from the association. Each one costs three Raimei Angelfish, 10 Pufferfish, and ten Bitter Pufferfish, but once you refine it five times, it’ll grant a 32 percent burst damage bonus and a 12 percent increase in burst crit rate.

In terms of artifacts, Emblem of Severed Fate isn’t hard to get, and as before, you’ll want a decent level of energy recharge: around 275 percent. You’ll also want attack, crit rate, and crit damage, but bear in mind that if you’re using The Catch, you’ll get extra crit rate when Raiden is using her burst, so it doesn’t need to be as high. If you’re really struggling with Emblem of Severed Fate or want something easier, try two pieces of Scholar or The Exile for their 20 percent energy recharge buff.

And that’s our Genshin Impact Raiden Shogun build guide. Good luck if you’re planning to grab her in the rerun!

It’s not long before the Raiden Shogun returns. The first half of Genshin Impact version 2.5 may be dedicated to the long-anticipated shrine maiden, Yae Miko, but after that, it’s rerun time. Starting around March 8, 2022, you’ll be able to take your chances wishing for Kokomi and the Raiden Shogun. Many players who missed…

It’s not long before the Raiden Shogun returns. The first half of Genshin Impact version 2.5 may be dedicated to the long-anticipated shrine maiden, Yae Miko, but after that, it’s rerun time. Starting around March 8, 2022, you’ll be able to take your chances wishing for Kokomi and the Raiden Shogun. Many players who missed…